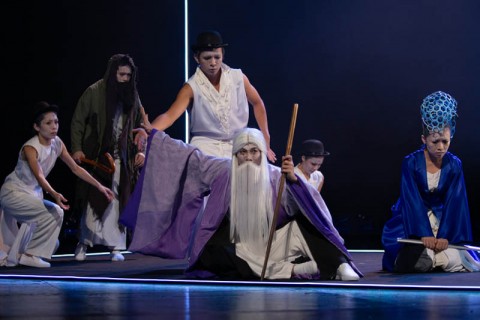 When the curtains opened (figuratively, because there were no curtains), I felt hopeful and excited about Nine Years Theatre’s (NYT) venture into adaptations of classics, and possibly contextualising it for local audiences, coupled with NYT’s unique stylised movements, form and set.

Lear is Dead boasts a clean, minimalistic stage, bare except for 9 rods of florescent light outlining an open cuboid, housing the play within the play. 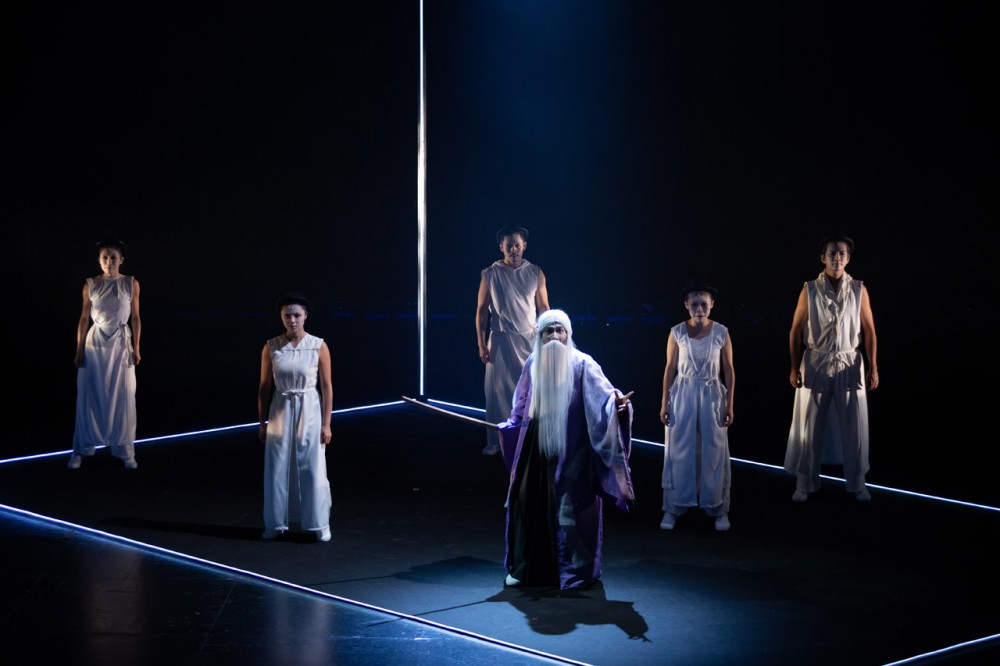 The Fools (of The Fools Society) took the front stage in a dialogue interview session that breaks the fourth wall, and also introduces the world of the play within which the supposed tribute performance of Lear takes place. At first I thought, what a fresh take to frame King Lear in a modern world. Nelson Chia, director and also the author of the adaptation uses the idea of a pre/mid-show dialogue as a witty structure to help audience quickly draw parallels between the state of King Lear’s fall from power to the state of affairs in our local context. In the programme booklet, Nelson mentions that he wishes to make classics accessible to audience by helping them overcome the fear of classic due the perceived lack of relevance to their daily lives. This play within a play structure intends to bridge the gap between modern day and classics.

However, instead of simply helping audience draw parallels between the world of the play and reality, the dialogue-interview segments incidentally became a mouthpiece that announces the director’s opinions. This move is undeniably ambitious and daring, putting socio-political commentaries across frankly and blatantly at the frontline. But it leaves little room for audience to think critically about the situation presented on stage, and to form their own opinions to critique the socio-political issues in real life. As a result, majority of the audience seems to go along with the proposition: agreeing passively in their seats, laughing with acknowledgment at the nuggets of truth tossed out during the interviews, instead of questioning the status quo, or why and how things turn out this way in society. The dialogue-interview structure, which seems to symbolise inquiry and critiquing, suddenly loses credibility and significance in responding opposite the original King Lear. This is regrettable as it seems that important takeaways for the show are embedded in these interviews. On the other hand, if the dialogues were meant to be satirical devices to reprimand the state of pseudo-democracy in societies, then the interview answers offered by The Fools like “We should then choose wisely” do not make coherent sense to create a satirical irony.

Secondly, the play constantly highlights the fact that King Lear is only human, he is not god despite his power and authority, he is imperfect and plays up his familial relationship with his daughters as a father. Yet, the general sense of the bare stage and the play within a play structure alienates the audience from King Lear. If the play is trying to bring out the humane side of Lear by evoking audience’s empathy for him, then I’m perplexed by some of the directorial decisions. Is alienation the best tool to bring out audience’s empathy for King Lear? An alienation effect usually seeks to reduce or remove emotional motivation. So how can one be asked to invest empathetic feelings and then be constantly reminded to view the King objectively?

Or maybe, empathy is not what the play wants to achieve here.

Then, let us look at the discourse that this adaptation seems to highlight: the struggle between power and wisdom that the King embodies. Can power and wisdom coexist? Does power corrupt wisdom definitely? Is this a constructive/valid question? Of course power and wisdom can coexist, the problem is whether we can find a person who is able to embody both. The play is rich with quotable quotes about wisdom, power, choice and balance. I am undecided whether this is a good thing... 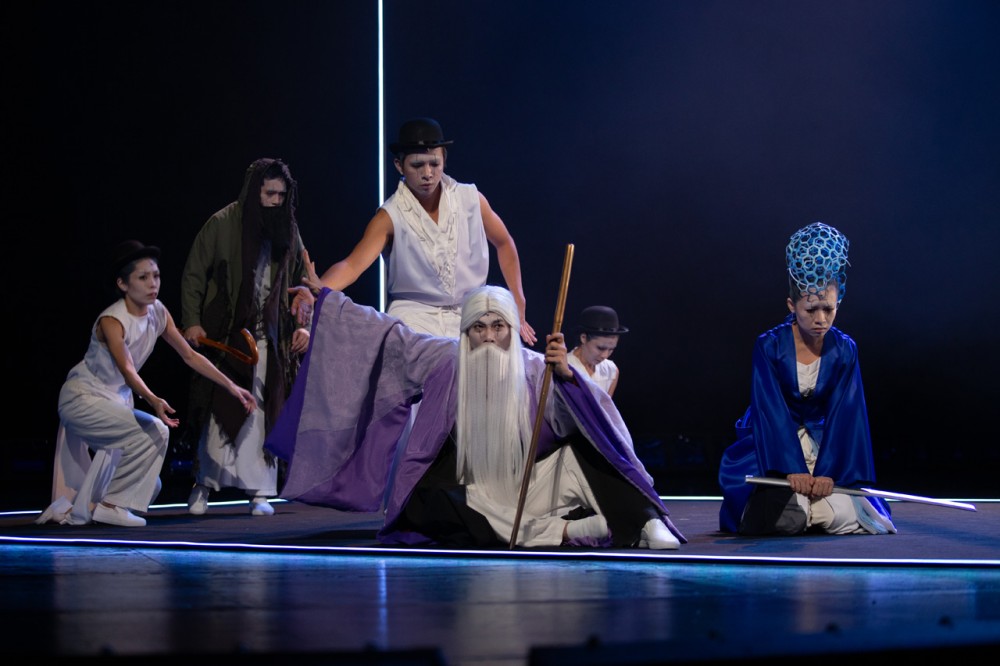 The three baffling points aside, my gut feeling is that I like the play. It may not be NYT’s best show yet, but I feel that many of the director’s signature moves and styles have pushed through and I like them. Aesthetically, the play is pleasing. A rotating flood lamp (which we saw in Pissed Julie) signifying a change in time, mood and scene is used. Also, an ensemble chorus (which we saw in Art Studio) makes its appearance. The cast carries a kind of quiet, mechanical, static state with them as they move, channelling their inner energy into their voice work instead of surfacing the tension in unnecessary body movements. I think the director has successfully exploited his company’s strengths and circumvented their shortcomings.

The bare stage exposes the stage trappings and the sheer number of lamps and lights, creating a clean, artificial environment to prime a colourful set of costumed fictional characters. The costumes are reminiscent of Chinese period mythical drama, but really, they do not instigate a particular time-period. They work to alienate the story from its Shakespearean root. The same rationale is applied to the company’s choice of Chinese diction. Both work to dissolve whatever preconceived stereotypes audiences may have about Shakespeare so that they may become more acceptive to what new ideas the adaptation can bring.

Near the beginning of the play, performers don on their costumes that are lowered from the stage ceiling as if signifying they are puppets (of the state?) on strings. (A similar device is used in Art Studio where each performer was handed an item inducting them into their roles.) But the spell is not broken in the end, the characters do not come out of their tributary King Lear performance, to come back to the present as critics. So, we are left wondering about the present of the constructed world of the play.

I also enjoy the translation of Shakespearean English into NYT’s signature Chinese diction/vocabulary. There are no convoluted Chinese expressions, even though it must have been a challenge to reword some of the old formal English phrases into simpler Chinese terms.

Special mention goes out to Timothy Wan. His voice work evolved some time between Fundamentally Happy and Cut Kafka!, and his enunciation becomes a joy to listen to on stage. Ching Shu Yi is another character who surprised me with the diversity of roles she manages to portray over such a short time in her performing career. She proves herself to be a steady performer fulfilling much potential.

All in all, if NYT’s intention was to simply make a classic become accessible to the public, and to nurture a set of audience who’d fear less of classics, then they have succeeded in this work. And maybe, this is already enough for now.