7 Mar 2020
Article by Joellene and Noah, from Backlight
Photos courtesy of Pangdemonium 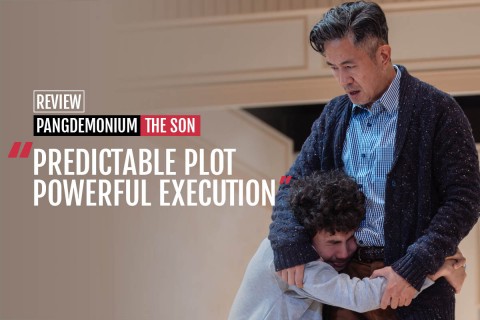 The Son is a play that fully embraces its difficult subject matter. It doesn’t shy away from the pain and confusion that many of us associate with mental health issues, depression and suicide. And it’s this quality that makes reviewing it slightly tricky – from the very start, there are two clear lines that we’d like to draw: one, a line between the legitimacy of the subject matter of mental health and the effectiveness with which the play conveys its message about that subject matter; and two, a line between the play written by Florian Zeller, and the performance that Pangdemonium has put up.

Let’s start off by highlighting the significance of The Son as a play about mental health, especially how these issues are quickly becoming a large part of our youth's narrative. It’s timely, definitely, to be addressing these issues. In particular, The Son is less about the son, but rather, more about his parents’ inability to understand him at all and, by extension, their inability to help him. This gives the audience a more relatable window through which to see depression, through the eyes of parents who, for the life of them, cannot understand how their son turned from a cheery little boy into an anxious, wan teenager. Throughout the play, Pierre (Adrian Pang), Anne (Shona Benson) and Sofia (Sharda Harrison)  demand a rational explanation for Nicolas' (Zachary Pang) behaviour. “Why are you doing this?”, “What’s the matter?”, they ask. The key here is that The Son doesn’t give us a straight answer to these questions. This isn’t to say that that the play shies away from it – but more that it acknowledges that there is no easy answer. Nicolas could be depressed because of his parents’ divorce, because of stress in school, because of the pressure his father puts on him, or simply because he “wasn’t made for this life”. Nicolas himself doesn’t know why. The Son embraces that ambiguity, and we think that’s important because it showcases the real ambiguity of depression. 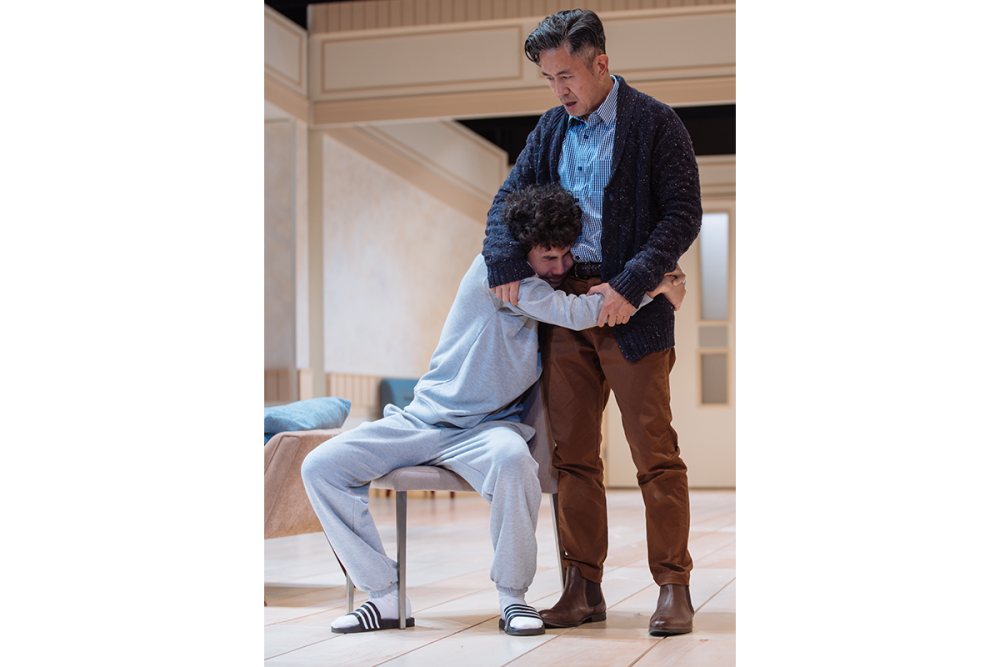 However, these are all opinions rooted in the undeniable legitimacy of mental health issues as real, pressing social problems that we should all be concerned about. Legitimacy doesn’t change the fact that The Son tells a story that feels like it’s been done many times before. The mystery surrounding Nicolas and his parents’ incomprehension of his pain makes for a predictable plot that is one-note on the issue of depression. The Son presents it as an important issue that we need to address, but does little to value-add to the narratives we already know. This is partly due to the same fact (raised earlier) that it portrays depression through the eyes of parents who will never truly understand the condition. For the majority of us who have never experienced it, this is a perspective we settle right into, and then the play doesn’t push us further than that. Granted, we are aware of our own limits on this issue – as teenagers ourselves – we feel we are already immersed in and familiar with narratives about mental health, perhaps due to our social circles being more open to such issues, or because our education system has us slightly more aware of the pitfalls of our own psyche.

Secondly, for us to effectively address Pangdemonium’s The Son, we need to clearly separate the play written by Florian Zeller, from the production put up by Pangdemonium. We have mostly praises for the way Pangdemonium has brought this play to life. In particular, Adrian Pang was outstanding as Pierre, at times making us sympathise with his efforts to reach out to Nicolas, and at others, making us recoil at his thick-headed inability to acknowledge Nicolas’ pain. Furthermore, the cast has amazing chemistry – there is a scene meant to show us what could’ve been, if Nicolas fully opened up to Pierre and Sofia. The three actors were able to show us exactly how bright and fleeting that moment is, as they slide cleanly from a happy family spending time together, to husband and wife, and their estranged son, and the invisible, yawning gap separating them. This scene worked so well because of the effective blocking: We are treated to Pierre and Nicolas dancing unashamedly together in the living room, with Sofia looking on. Our eyes are drawn to movement, and so we follow Pierre as he moves forward to urge Sofia to stand and join them; we see Pierre and Sofia link hands to dance, and by the time we turn back to Nicolas, he is already closed off and retreating, the light we just saw in his demeanour completely extinguished. That sequence of blocking put us, the audience, right in the shoes of the parents, who had taken their eyes off Nicolas just for a moment, only to realise that their cheerful son had vanished. 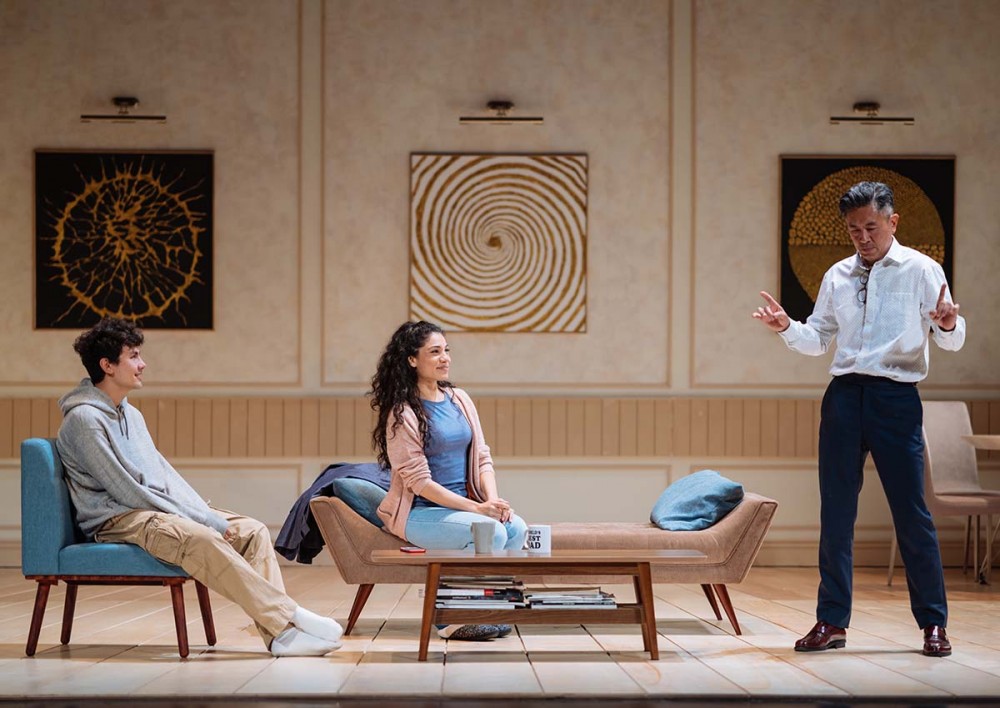 What impresses us more is the set design. It is this elaborate set-up giving the illusion of depth of field, with walls that can descend to form four separate settings: Anne’s house, Pierre and Sofia’s house, the hospital, and the set of doors in the back upstage. What is really interesting is how Pangdemonium uses this to reinforce the play’s message. The four settings can be seen as layers, moving from that closest to the audience –Anne’s house – to the furthest, deepest end – the doors at the back. And Nicolas’ struggle with depression can be charted through the characters’ progression through these layers. The play begins at the outermost layer in Anne’s house, where Nicolas confesses that he feels “unwell”, and that there must be something wrong with him. It is also no coincidence that the gun resides in the kitchen, in the first layer of the play. From there, we progress to Pierre’s house, the next layer, where Nicolas seeks solace in his father. He seems to improve, bouncing between real moments of comfort and happiness, and sudden bouts of moroseness. Moving deeper into the set brings Nicolas closer and closer to recovery and treatment.

Our only gripe with the way Pangdemonium has presented depression and mental health is that the play is obviously meant to be set somewhere in the UK. This might be a deliberate decision to stay true to the script written by a British playwright. But making actors speak in – extremely convincing – British accents, and references to British places and things, slightly alienates us from the subject matter. Taken to the extreme, it gives the impression that the mental health issues being discussed are more of a “white people problem”, and doesn’t fully address the reality of mental health issues in our local context.

We’ve made all these distinctions in order to fully engage with The Son, whether on its subject matter or portrayal, or plot or execution. Regardless, a play about mental health is worth supporting, if only for the impressive acting, blocking and set design.