26 Feb 2020
Article by Joellene and Noah, from Backlight
Photos by Patch and Punnet 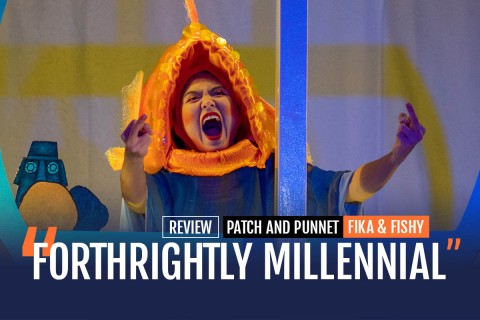 Fika & Fishy by Patch and Punnet is a performance featuring the unlikely friendship between adorable, innocent Fika the Dog and bitter, disillusioned Fishy the...well, Fish. The distinct contrast between these two characters lead to both hilarious interactions and intriguing introspection. By framing familiar dilemmas within ridiculous situations with a dash of irreverent humour, Patch and Punnet stays true to their rooted vision to “create a welcoming theatre scene that inspires creativity, conversation and change”.

With that in mind, Fika & Fishy may swing between ridiculousness and introspection, but throughout it all, it manages to be consistently forthright. It may be about a ridiculous, precious friendship between a fish and a dog, but in the end, it is a genuine portrayal of how friendships form despite apparent differences. It doesn’t shy away from a plainly-worded conversation about a dog’s lack of balls after being neutered, but neither does it shy away from what that says about Fika’s personal freedom. Another perfect example would be their discussion of “furry privilege” - the phrase itself is ridiculous, if you know what “furry” means on Urban Dictionary. The word carries a social meaning, plainly setting up the divide between Fika and Fishy. Indeed, we clearly know these two from the very beginning: Before the performance begins, Fishy sits in her bowl, irritably swimming in circles. Within the first scene we understand that she’s bitter about the inevitability of her death and her inability to experience life outside of her bowl. Fika, on the other hand, is the owner’s new dog who is enthused by anything and everything he sees, enjoying freedom away from the animal shelter. As the story unfolds, we are presented with forthright conversations on both Fika and Fishy’s feeling of being trapped -- one in an abusive relationship, another within a glass bowl. 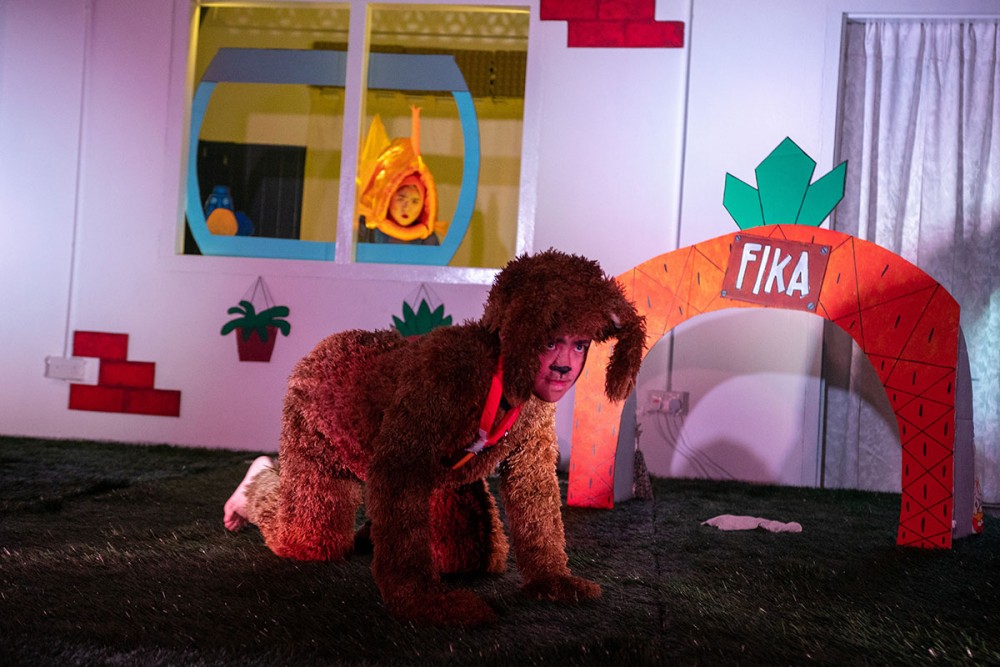 On the surface, Fika & Fishy functions easily as a forthright, heart-warming story. This lack of frills frees up narrative space for the inclusion of Easter eggs throughout the play. These are little nostalgic references to pop culture that might be relevant to a millennial’s childhood: The decorations in Fishy’s bowl are shaped like houses from SpongeBob SquarePants, a discussion about “the circle of life” like from The Lion King, etc. In fact, the very premise of this story -- an unlikely friendship between two animals -- is very much a familiar story to anyone with a childhood. From the beginning, as we walked in and waited for the show to start, their house music consisted solely of nostalgic Disney and Pixar theme songs, setting the tone for the story to come.

To us, however, the most interesting Easter egg is this: Fika and Fishy pass by a street called “420 Wallaby Way” towards the middle of the play. This is both a reference to weed and 42 Wallaby Way, the address Dory was looking for in Finding Nemo. It is a strange combination, but it encapsulates exactly what makes Fika & Fishy so unique. It balances these nostalgic references to childhood with jokes about sex, furries and dildoes, and the reason why it can so forthrightly do this is because ultimately all this is a reflection of its audience. Patch and Punnet aims to create theatre for millennials, by millennials. And so, delving into this millennial identity brings us the dissonance that characterises this part of our lives. The innocence of childhood is a recent memory for us, but that contends with a less sanitised reality in the present, particularly in the exploration of one’s own body, of sex, of the strange stupid comedy that adult life sometimes is. If we read ourselves into this play, it becomes far more open-ended than the simple story it seems to be on the surface. Fika’s story could be telling of our relationship with our parents or even with this home called Singapore. Fishy’s arc could be about all the dreams we desire to achieve before we die, or the possibility that we are insignificant in the grand scheme of things, that when we die, no one would miss us. Ultimately, Fika & Fishy is immensely cognisant of the identity and preoccupations of its audience, and exploits that to tell us an honest story -- it describes our reflection in a mirror, just with a different frame. 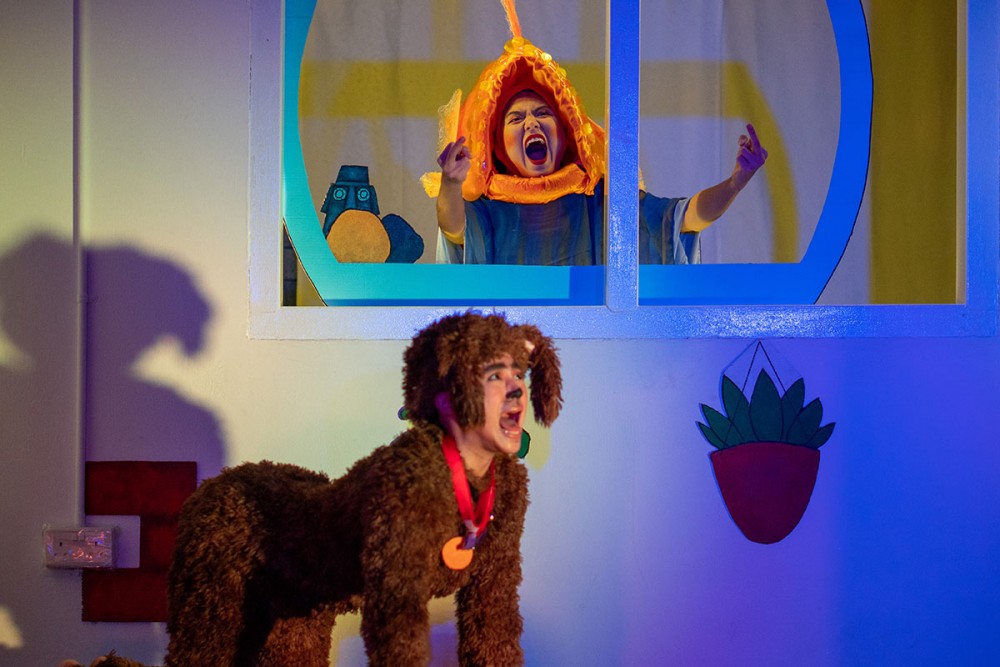 This is reinforced by how Patch and Punnet curates the space within which we would receive Fika & Fishy. It is a cosy little shophouse in Little India, with beanbags, pillows and a couch, all warmly lit and welcoming. The play itself does not take place on a stage -- it is just a space with props and a window for Fishy to look through. Music was done by a live band, consisting of three guys sitting at the side with instruments and a laptop. This is a stage stripped down, presented to us not from a pedestal but from eye level, with the stuffy formality of theatre removed. Fika & Fishy is presented to us with all the smoothness of a professional production, but accessible and earnest in a way that a play at a conventional theatre space (say Victoria Theatre) may never be able to achieve.

It is this understanding that we’d like you to carry into watching this production: that Patch and Punnet and Fika & Fishy are unique in their forthrightness and earnestness and passion. We urge you to laugh honestly at their jokes, feel honestly for each character, read your own story honestly into this narrative, and to meet this incredibly passionate team with all the honesty they present to you.

A vlog of Joellene and Noah's experience of entering and navigating the theatre space...