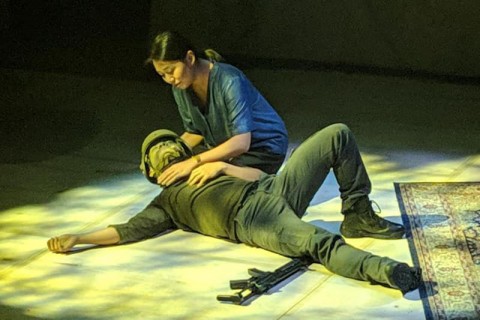 Understandably, a newly written play can be a challenge to stage. The Old Woman and the Ox got too heavy too quickly and there seem to be more answers than questions.

One of the many downfalls is that the play tries to tackle too many issues. The director’s devices could not help to straighten out the web of entangled trains of thoughts the playwright seems to have. There is the thorny relationship between the Mother (Aileen played by Shannen Tan) and Son (Joseph played by Lim Jun De), Mother and (her stillborn) Daughter, Mother and her mother (Bi Yu played by Miriam Cheong), and the Son and his hero complex. 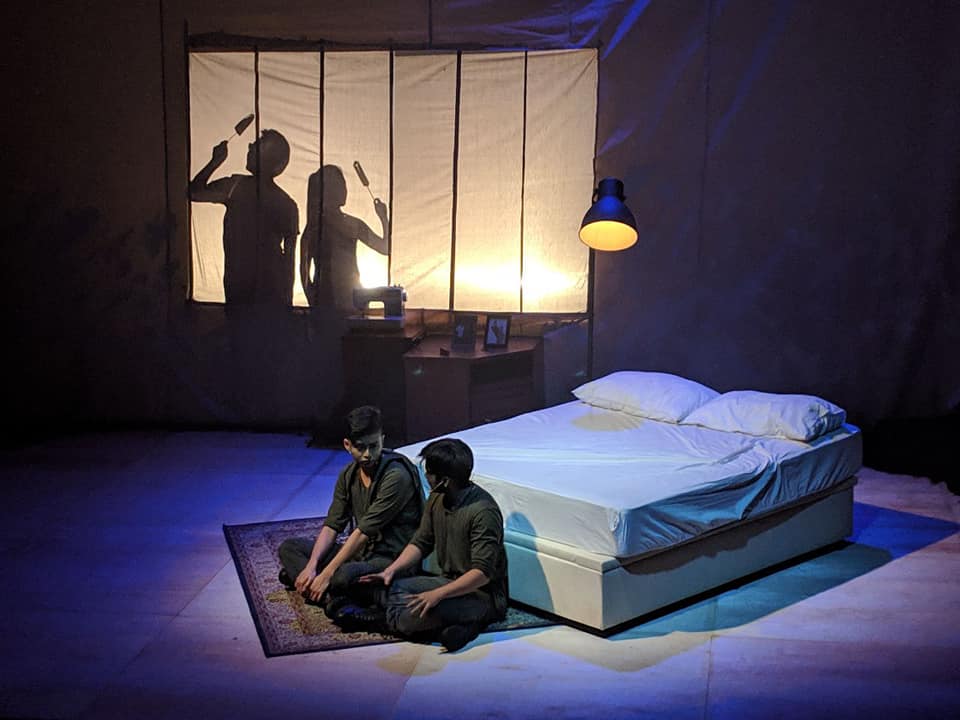 First, the play is not clear as to what the motive or root problem is that causes the protagonist to hold a guilty conscience, which later seems to spiral into a hero/martyr complex. (Actually, I’m not exactly sure if Aileen or Joseph is the protagonist...) Or is it because Joseph is raised in a single-parent family? (I’m not even sure if I am supposed to infer this from the numerous quarrels between Aileen and her mom, indicating Aileen’s lack of trust in men or in relationships, therefore compelling her to seek solace in religion?) Or does Joseph think that he indirectly worsened the depression symptoms his Mother seem to have developed (by not doing anything)? Or is it a religious pretext? (Is Joseph pressured into upholding some staunch religious beliefs?)

So, when the trigger argument scene happened between Joseph and his Mother, there is not a high enough stake to substantiate his leaving home.

Moreover at the halfway point, audience members are still not invested in any of the characters, because somehow, the creators have kept the characters’ backstories a mystifying ball of subtlety, occasionally hinting at Mother issues / Oedipus complex, but never really isolating the core issue at hand. Audiences can make inferences, of course, but since I can’t make head or tail of the issue, I’m not sure how to contextualise my inferences.

If the core issue is the Mother-and-Son relationship, then the preface of the play between Aileen and Bi Yu might have gone on for too long, since their soured relationship does not automatically lead to a poor relationship between Aileen and Joseph. There is no direct correlation between their respective soured relationships since the motive for their fallout appears to be very different. One does not supplement or complement the other. It is not a cause and effect; it is also not a juxtaposition. So I’m unsure what to make of the dependency between the first and second half of the play.

If the core issue is the relationship between Aileen and her mother, Bi Yu, then why dwell so deeply into Joseph’s peripherals - Joseph comforting and advising his comrades on their own issues, taking the bullet for his friend, and his perpetual emphasis on having not come from a ‘normal’ family? I’m not sure I can tell how abnormal his family is, given that the issues Joseph and his mom fight about are not that uncommon in heartland homes, making the martyr complex of the protagonist a little too navel-gazing. 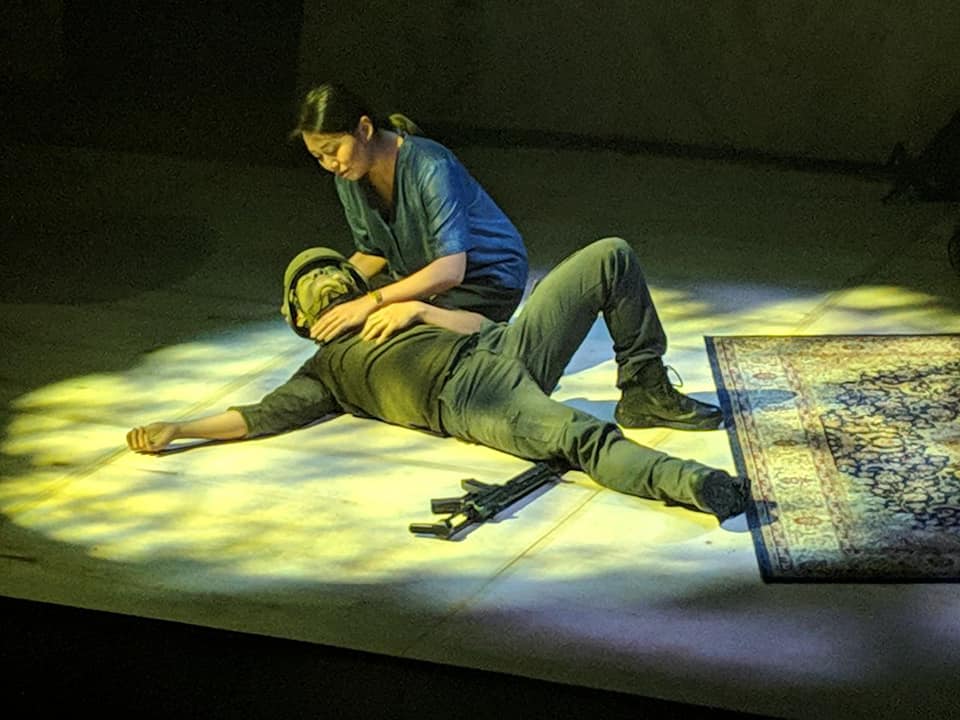 Second, the surreal ambience that the creators are trying to achieve is not coming through clearly. The spectres in Aileen’s life are portrayed in an awkward position, where audience are not sure if they are flashbacks from memories or ghouls she imagines that haunts her conscience now and then. There are attempts at trying to place these characters in limbo, like the rapid lighting changes and slow-mo movements that Bi Yu does, and them avoiding eye contact sometimes when Aileen offers her mother cookies and milk. But other times, they are looking at each other intensely, having conversations and heated arguments! Creators of the play need to be clear on the motives of the appearances of these characters, whether in the surreal realm or in reality in the form of memories, so that the audience can deduce more sharply if these images are guilt-driven (elaborating the psychological state of Aileen) or actual flashbacks (that causes ripple-effects in daily life decision-making).

The appearance of the ensemble for the National Service(?) scene came at about half-time, providing the audience a temporary break in the form of comedic relief. But to many, the scene might also have divided the first from the second half of the plot too cleanly and abruptly, causing audience to feel that the son’s plot is too segregated from the earlier half. This exacerbates the confusion audience feel for the plot arcs and character arcs. The language used on stage is also not too friendly for the ears; the lengthy paragraphs sound more suited for reading on paper, than to be spoken, especially in a play with so many dialogues.

The issues raised in the play are undeniable important and urgent for families and youths at risk, but these points merely surfaces problems; they fail to trigger deeper, critical thoughts about these issues. At the end of the day, are the characters really looking for anything? Do the creators of the play know what they are looking for when writing and directing the play? Is the cast convinced of the motives for their respective roles in the performance?

Regardless, I think The Second Breakfast Company has done a good job in structuring their main seasons, in providing a platform for young and up-and-coming playwrights to experiment and realise the ideas in their heads. Only by translating the words on paper and images in the head to stage, can artists grow and hone their crafts and progress artistically. 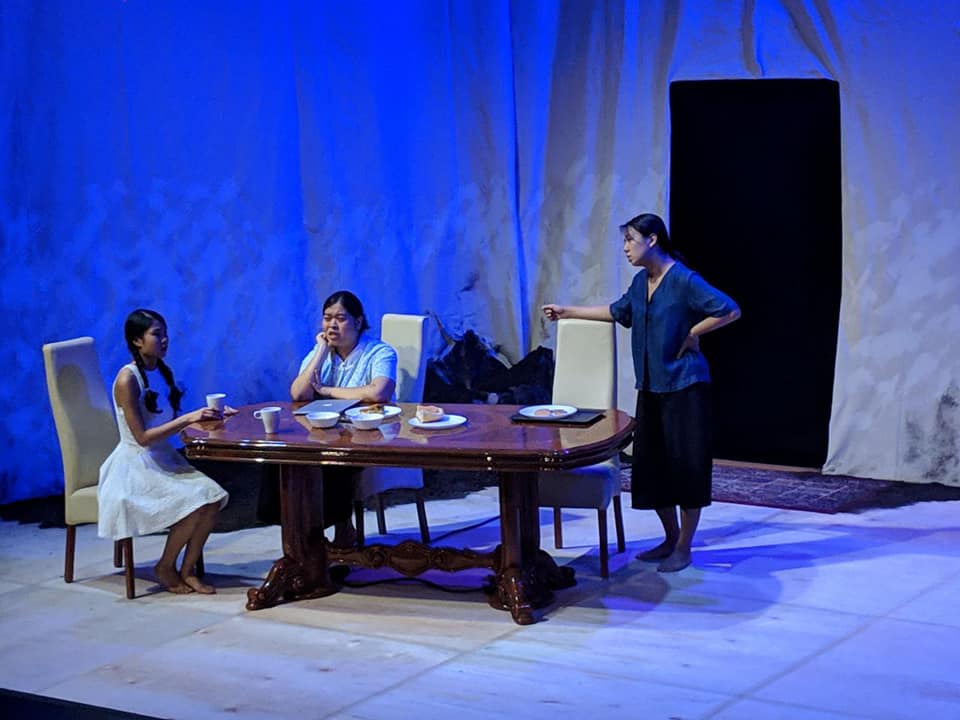