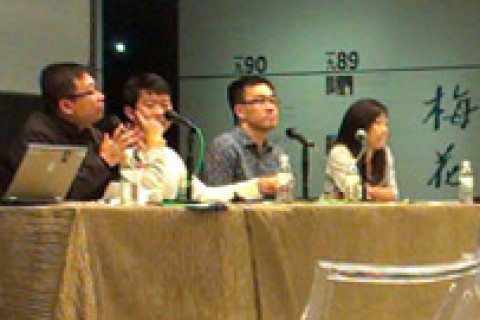 It would sound crazy to most people, that I should read the mind-boggling works of Haruki Murakami in both languages – English and Chinese. It would sound almost ridiculous, that I have further attempted to read his most recent complete volume of 1Q84 in both forms of Chinese – one translated by a Chinese writer and the other, a Taiwanese writer.

My original intention was to become familiar with Murakami’s work in the shortest possible time. However, reading in Chinese language was not my forte, therefore I started reading Kafka on the Shore, simultaneously matching each chapter with 海边的卡夫卡. From there, I began to appreciate the beauty of language in novels, attributed to the stark difference that arose from cultural norms and language signifiers that are embedded in each language. Discrepancy exists, even within the same language, but of different forms, coming from a different country.

Due to the inherent make up of language, it is heavily reliant on societal and cultural norms. Translating a play script for the stage, is not as simple as para-phrasing the words, verbatim. It takes on an extra facet (when compared to translating novels) that adds to the complexity of paraphrasing – the words are further to be performed by actors on stage. It then, has to take into consideration, societal stigmas that could be linked to the original language or the translated language. Robin Loon raised the example of a dilemma faced by his actor in translating a Chinese play into English, in which they had to depict a poorly educated character speaking good English. How is that apt in the translated context was a question that surfaced (because it seemed to be assumed that a poorly educated man would not have mastered a fluent level of English). So, eventually (or in the first place) a ‘frame’ needs to be fixed: Is that translated play going to be just a ‘voice-over’ in the translated language, or can it be a parallel expression in the new language, and therefore has to be portrayed in a new, localised context?

In the former decision, we may encounter the problem of inheriting clumsy expressions in the translated dialogues. Or we might stumble upon phrases or vocabulary that simply does not exist in the translated language. In this case, we refer to the latter dilemma.

In mapping the original script onto a newly defined (societal) context, how far can we go in creating ‘parallel dimensions’ in order for the target audience to comprehend the play in their wavelengths? What is the balance to strike between trying to preserve the original intention of the original script by creating parallel dimensions in the localised context, and trying to keep the language or setting of the script as original as possible? Jeremy Tiang came up with a surprisingly clean and simple suggestion, which is to add a ‘localised’ line in the dialogue to act as a ‘footnote’:

“You know, like the property pricing of our HDB flats.”

Why do we translate? One of the motivations mentioned by Jeremy Tiang was the crossover – the hope to bridge the gap between English and Chinese theatre: be it the form of performance or in the way of theatre practice. For example, translating a good piece of script from its English origin, to a Chinese play, allows the Chinese-speaking community to access theatre concepts from the West, but in a language familiar to them. Furthermore, it also value-adds the theatre group who is carrying out this translation. It seems that translation in theatre requires performers to deconstruct the original script, in order to explore ways to bring out the original intention and in overcoming stigmas whilst performing the script using appropriate signifiers in the new language. Bearing in mind the audience (and the society they come from), translations must consider the difference in the signifiers of the words used in the dialogues of the play. Therefore in trying to localise the script to a specific context, translators are forced to ‘adapt’ the script in most parts.

So what are some of the clever means that could be employed to overcome translation difficulties? Candace Chong suggests the blurring of the original setting of the play, if it is too difficult to be accounted for in the translated context. And only in theatre, can you also look into translating the rhythm of words into the rhythm of tone (in the case of Chinese pronunciation). Robin Loon further adds that punning and word play could help shape the new translated script.