[Review] Off Centre overwhelmed by nostalgia 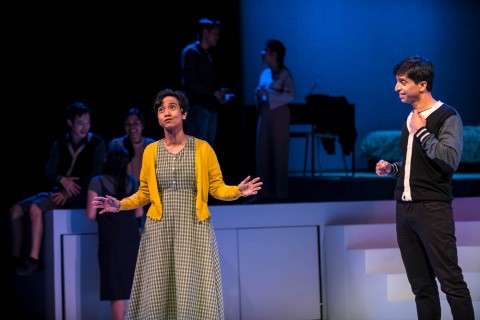 My first encounter with Off Centre is in 2015, during Esplanade’s The Studios: fifty, directed by Oliver Chong. Then, I was mesmerised by his use of geometrical paper masks, depicting animal heads (and sometimes the protagonist Vinod’s head) worn by the ensemble. Under Chong’s direction, the surreality lends the dark and intensely emotional script, laden with dialogues, a poignant overture.

In contrast to Chong’s rendition, The Necessary Stage (TNS)’s reprisal of their classic remains classical, very much adhering to the original and faithful to the text. 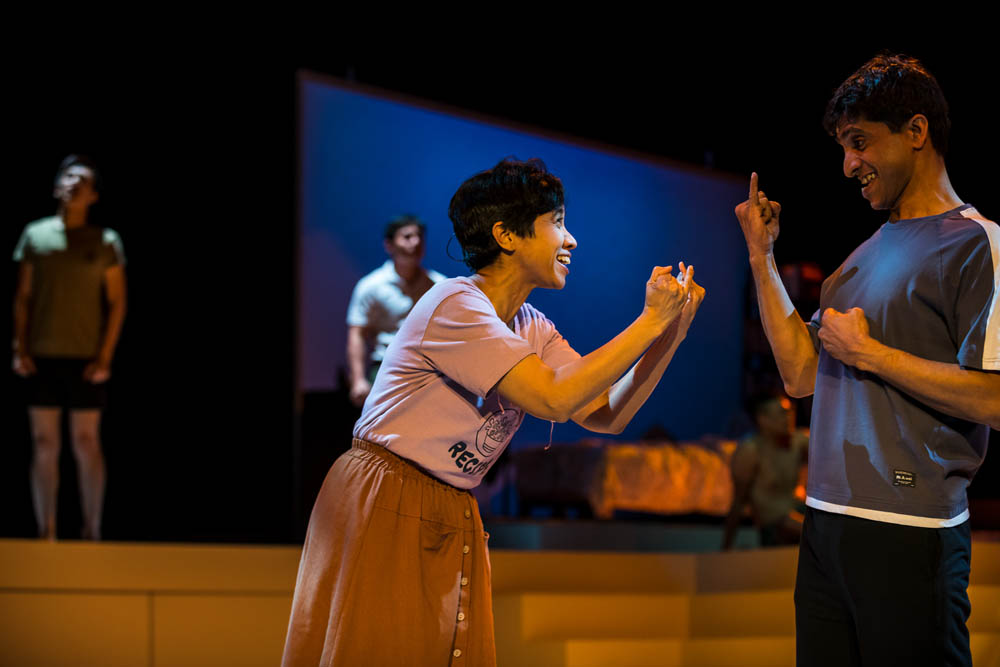 In the 1993 Straits Times review, Hannah Pandian commends that “Off Centre marks a new maturity in Singapore theatre.” One can imagine the intrepidity in TNS’s first staging, their daring confrontation with social issues that must have been quite a taboo in the 1990s of Singapore’s society, the kind of direction that included an extent of nudity (though in no way was that supposed to be a highlight), and their sincere honesty in broaching mental and conscription issues which apparently blew their funding.

The synopsis of the play states “Off Centre follows the unlikely friendship between Saloma and Vinod, and traces their journeys as they deal with their personal conflicts as well as social prejudices against mental health conditions.”

In this staging, although the bedroom sets of protagonists Vinod (Abdul Latiff Abdullah) and Saloma (Sakinah Dollah) are in plain sight of the audience, they are positioned at the back of the stage, perpendicular to each other. There is a flight of stairs in the centre of the stage. It seems like there is a lot of space downstage reserved for the ensemble. This direction seems to downplay the limelight on the protagonists. I feel like in many scenes, the protagonists have become smaller and made less significant, which is in contrary to the role they are playing and the intent of this play. I can feel the sincerity and energy of the precocious but adamant Saloma, and the fast unravelling of the nerves of a glib-tongued Vinod, but it looks strenuous. 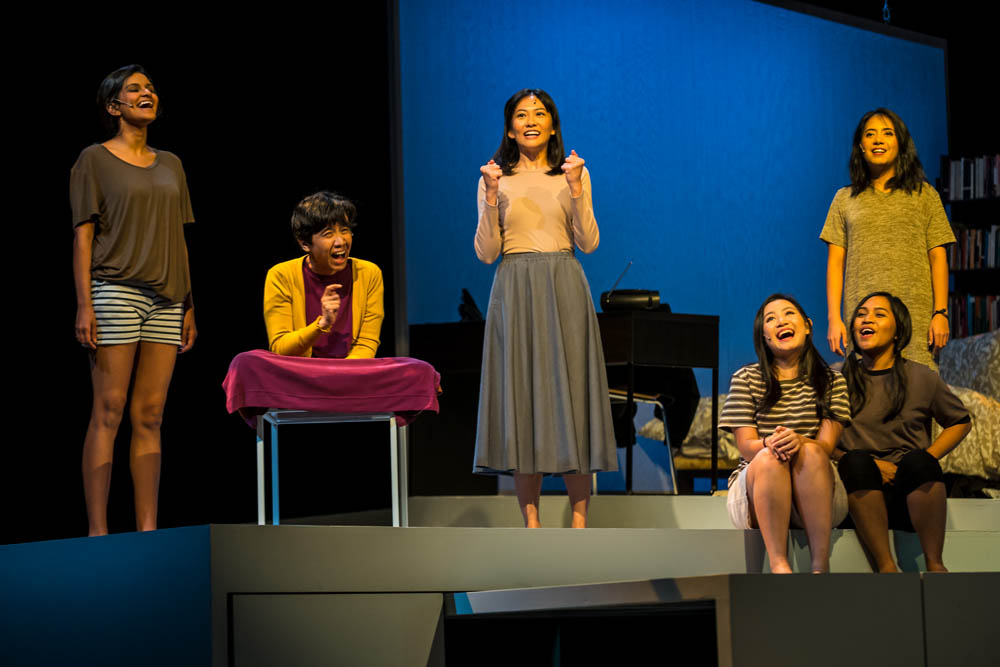 My heart goes out to Najib Soiman who plays a security guard at Vinod’s void deck. The selfless love his character displays for Saloma and Vinod is evident in the way he tackles his lines in an easy-going, nonchalant and unthreatening way, allowing me to see him as a life buoy for Saloma at a time when she needs to feel grounded.

However, things in the society must have changed since 2006. Off Centre became the first Singaporean play to be included in the local literature curriculum. In 2016, MOE announced compulsory education for all special needs children starting from 2019, in line with the government’s statement to build a more inclusive society. Since 2015, NIE has included modules and a Masters program in Special (Needs) Education that includes dealing with psychiatric and emotional and behavioural disorders.

Already in Inkpot’s review of the 2007 TNS staging of Off Centre directed by Alvin Tan, reviewer Amos Toh has lamented their “refusal to update the script” has “[taken] its toll on this revival”. Eight years on, I share the same sentiments.

The characters Vinod, and Saloma’s mother have become timeworn and insipid, having retained the same lines as in 1993, such that their rants teeter on the brink of being didactic or stereotypical. 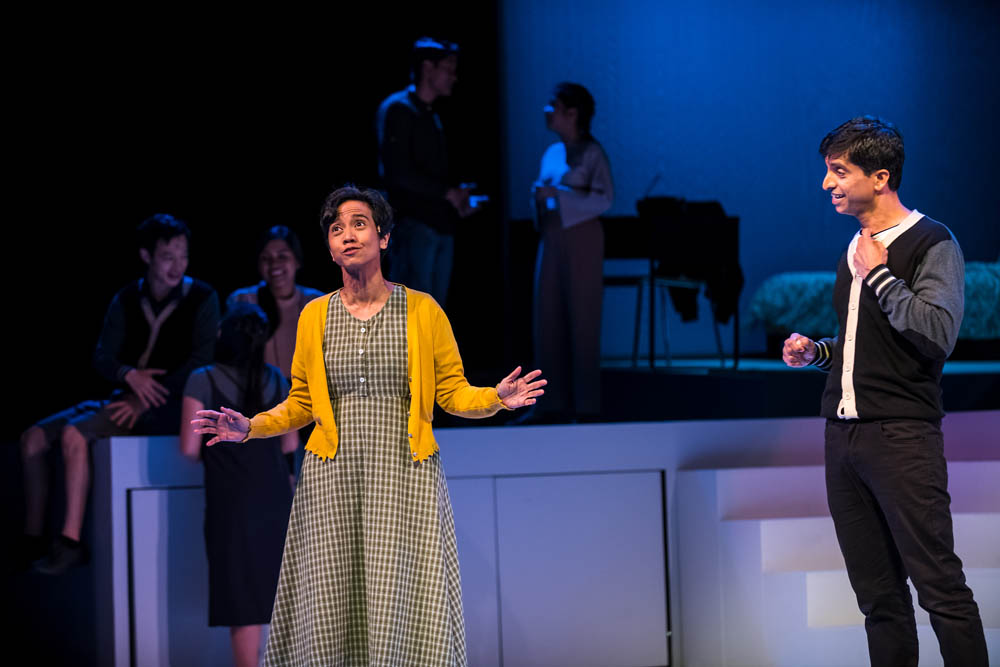 When leaving the theatre, I heard two younger persons behind me harping on how this play had lost its funding when it was first staged. This shows that the message the play is trying to put across has become lesser than the funding issue (and perhaps political play has become more pronounced) in today’s worldview of the youths.

Although I am aware that many of the mental issues raised in the play have not been allayed, and/or are still taboos in pockets of community, I think the society’s understanding and accumulated experiences have more or less evolved since 1993. Several cases have since surfaced in global media to encourage the making of an inclusive society. I think the current set of audience can be more challenged than the one TNS was performing for in 1993.

Right now, I appreciate my privilege for being able to witness this classic play being performed by the original set of protagonists (Abdul Latiff Abdullah and Sakinah Dollah). But I feel that this reprisal of the classic is lightly veiled in rose-tinted nostalgia. The power of its social message has lost its impact.