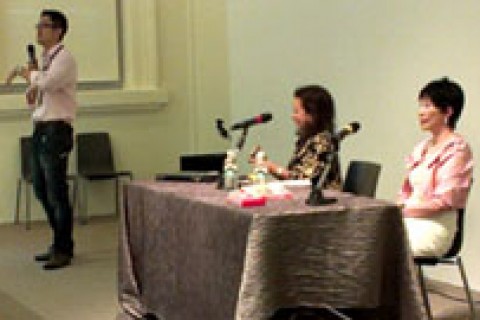 It was a huge crowd in The Salon at National Museum of Singapore. I knew it was going to be an event with two famous persons. However, I wasn’t sure whether the crowd was attracted by their fame, the (political) nature of their works, or the perceived (political) direction of the conversation between two well-known and outspoken political commentators.

I wouldn’t say Marina Mahathir is the ‘Catherine Lim of Malaysia’, but I guess their common interest in voicing out the problems in their societies respectively had generated a certain kind of expectation in the local audience. Despite the literary nature of the festival, Lim responded to the atmosphere in the room by laying out the criteria of a future political leader whom she thought the Singapore society would need to move on in this transitional period. Mahathir followed up with straight-forward introduction and insights of the situation in Malaysia which are as tempestuous, if not more so.

With their incisive observation and long-term activity in societal platforms, it is definitely not exaggerating to say that, the conversation almost became a showdown of the two countries, in the area of ‘problems’. Economic inequality, direction of national development, identity… among other issues in Singapore; corruption, unimaginably ridiculous acts of the authorities and certain organisations, empty promises made by the political leaders, and deprivation of making genuine choices during elections in Malaysia, were brought up by Lim and Mahathir to illustrate the hurdles in the transitional period of the countries. If the audience had a balanced proportion of citizens or residents from both countries, I could almost fantasize a situation whereby another series of debate would break out at the floor with people fighting to answer the question: “Whose country is more miserable?”

In fact this was not a pure fantasy. When Lim was passionately presenting her points, a member of the audience interrupted and showed great eagerness to ‘assist’ Lim in completing the scenario with ‘different perspectives’. And when the floor was finally open for Q&A, streams of energy immediately rose to fill the air. Of course, the audience was made up of mostly Singaporeans, so issues that were being brought up echoed those at various forums and occasions of similar nature. Mahathir, our dear guest from our friendly neighbour, was then exposed to the mood of dissatisfaction with policies about the languages, disappointment with passive roles of intellectuals in contributing to resolving disputes between the authorities and the people, and uncertainty in the ways of balancing economic prosperity and political freedom. There were issues with less heat as well. Lim and Mahathir responded to queries about their inspirations and forces for writing, and encouraged aspiring writers to observe, make notes of the observations and feelings, and start small.

No matter how much the organizer preferred the event to be intellectual exchange of literary ideas, I feel the audience (and the people) would grab the chance to express their side of the story when there was a hint of an allowable space. Nonetheless, Lim’s attempt in concluding the event by dedicating a lighthearted poem to our dear guest brought the tone back to the charm of the two speakers: Catherine Lim and Marina Mahathir. Their works have inspired people to think and talk about issues that had been eluded. And now, it seems that the spaces are never enough to accommodate the (unhappy) voices that had been buried for quite some time.