[Review] How many degrees of freedom does One Table Two Chairs have? 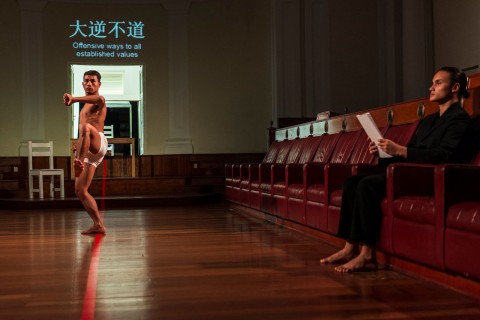 Another kind of debate took place in the Old Parliament House Chamber when Emergency Stairs took the stage at the finale of their Southernmost Arts Festival.

This would be my fifth One Table Two Chairs (1T2C) production I have watched since 2012. The most striking difference this year, would be how bright the venue looks. My previous experiences of 1T2C all happened in a black box theatre. It is so bright in the Chamber of The Arts House that I finally realised the walls are cream-coloured, not white. This is a stark difference to previous black box venues for 1T2C.

Also for the first time, the audience is watching the performance from an elevated perspective on the sloping parliamentary benches. Ironically, I am seated in what used to be the press seats (which are uncomfortable, uncompromising vintage swivel chairs imported from London in the 50’s). Having a bird’s eye view of the entire ground floor of the old Parliamentary Chamber pushes me to instinctively pigeonhole the performance in a histo-political context. Did the creators choose this venue to intentionally politicise their otherwise largely open-ended works? Or were they given this venue to challenge degrees of freedom and constraints in their creative processes?

Regardless, for an audience, it is now hard to refrain from viewing the performance through a politically tinted lens. 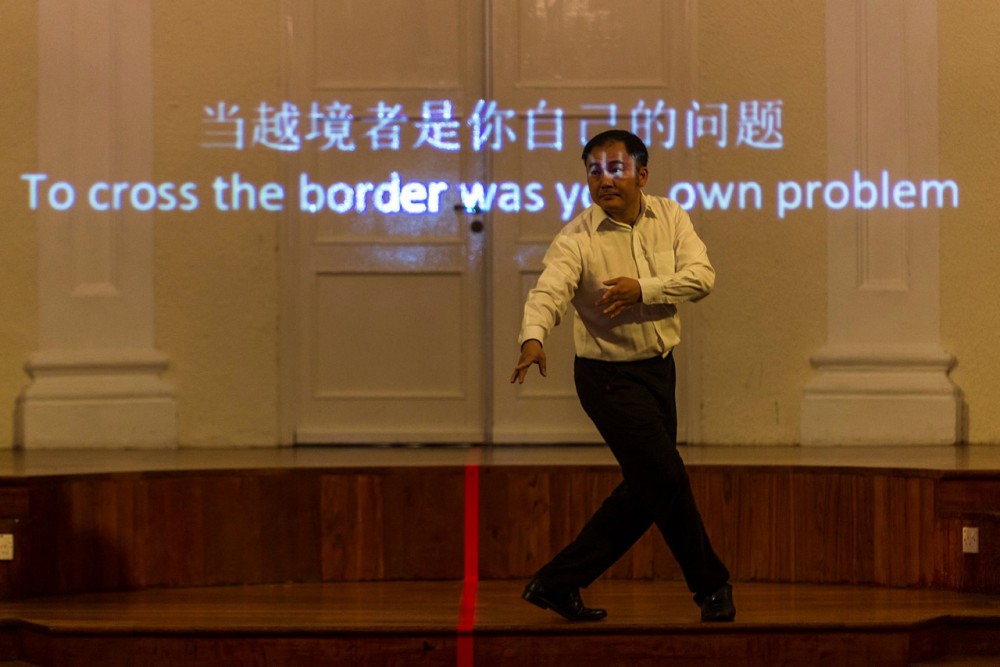 1st
At first, Liu Xiaoyi’s directorial piece might seem to lack the presence of a table and two chairs. But if you look around, the Chamber is filled with chairs, and at any one time, the actors occupy one or two of them. The lack of a table might be compensated by the vast corridor that exists between the two wings of Chamber seats on the ground floor, especially so from the elevated audience seats. It looks deceptively like a long narrow conference table between the two actors, who battled artistic skills and held conversations across it.

We see the two actors, both masters in their own traditional art forms, in a formal, monochrome shirt-and-pants ensemble, overtly stripped of their traditional artists’ identities. But the moment Wang Bin opens his mouth to sing Kun opera, and when Didik Nini Thowok shows off his elegant Javanese dance movements, we have no doubt that the two actors bring rich, histo-cultural experiences, and the intangible evidence of time to the table.

The text projections indicate a connection to Liu’s previous 1T2C works, derived from Kuo Pao Kun’s Descendants of Eunuch Admiral that dwells on a kind of weightlessness of not being rooted. This time round, Liu takes on a satirical voice, chiding us – the descendants of Eunuch Admiral, that it is our choice and (thus) our problem of becoming a eunuch / cultural orphan / leader /  follower / reviewer, or whichever handicapped form of ‘removed perspective’ we might eventually take in life. 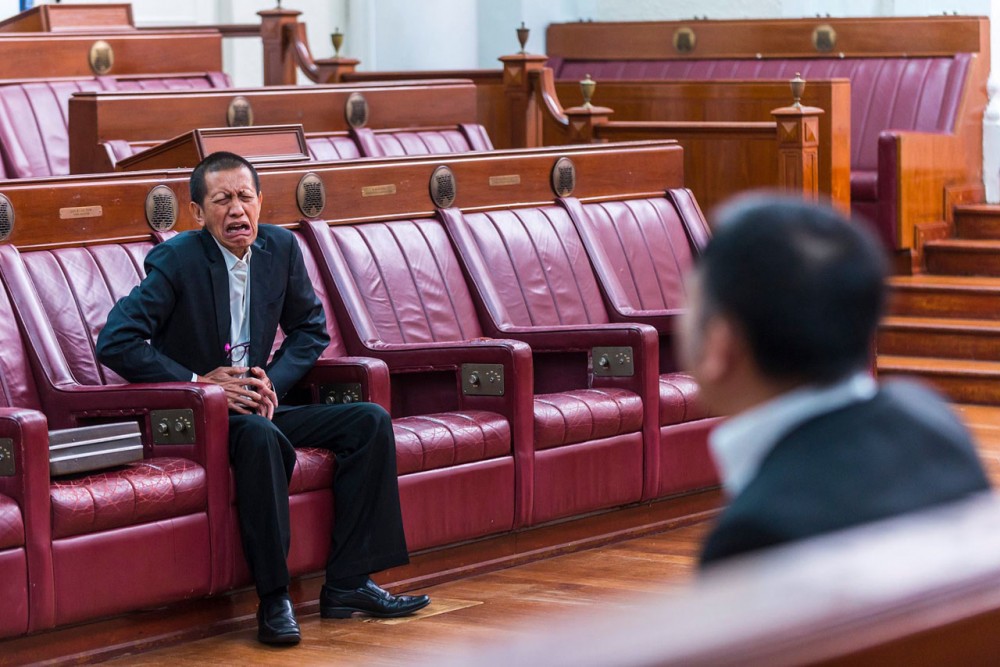 Perhaps what the creator wants us to see is that we should not fear being entrenched in or burdened by deep traditional cultural roots. In fact, regardless of the differences in each other’s expertise and background, the actors have no problem discussing down-to-earth topics to the likes of stomach upsets and spicy food, despite language barrier. Their shared experiences from different backgrounds only work to enrich each other’s newfound experiences.

Without accumulated cultural and traditional roots, any debate that we bring to the (political) table may well be deemed futile, fruitless, meaningless, or even baseless.

2nd
A debate between A (Wang Bin) and B (Liu Xiaoyi) took place; a battle of the winner takes all where only one can exist. They assume the roles of themselves, and of two Ming emperors, of which the uncle overthrew his nephew. I imagine the perpetual fear the new king must live in, thus triggering the perpetual (futile) search for the nephew, rumoured to be alive somewhere. This is an interesting juxtaposition, given that both actors are of Chinese origin. But A is a traditional arts master and remains in his home country, while B is known for his experimental techniques and resides overseas. Must one (identity or art form) preside over the other one? Must they be mutually exclusive?

Near the end, Liu gives a gibberish account at the parliament stand while Wang Bin sang his out beautifully. Who would the audience vote for? 3rd
Wrapped in only a pair of white briefs, Cambodian dancer Nget Rady appears like an innocent newborn, seemingly connected to Thai dancer Junior Dearden via the red tape that runs through the middle of the Chamber that signifies an umbilical cord, a bloodline. Dressed jarringly different in an impeccable office suit, Junior Dearden toes the red line cautiously, whilst his alter ego runs amok, performing parkour-like stunts. It is as though Dearden is forced to keep a straight face under the solemn circumstances, but perhaps his heart is pumping voraciously against his ribcage, begging to get out, as expressed by Rady. 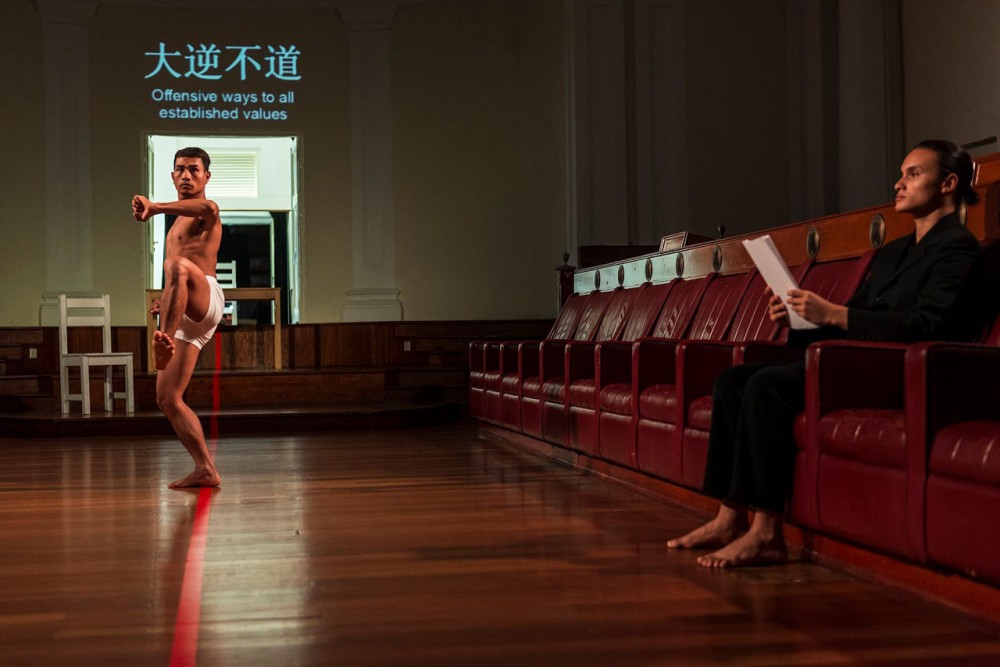 Directed by Danny Yung from Hong Kong, the use of red tape in an old parliamentary ground seems apt. We know that he has been pushing envelope in experimental theatre. Plus, Hong Kong citizens are known to have strong and vibrant reactions (as opposed to Singaporeans) to authoritative measures and political policies governing their lives and the state. This last 1T2C act seems like a perfect excuse for him to express that. And his last words? Tearing up the piece of blank paper that could have symbolised the mask he wears in front others, or a law-binding contract he no longer needs, or believes in. 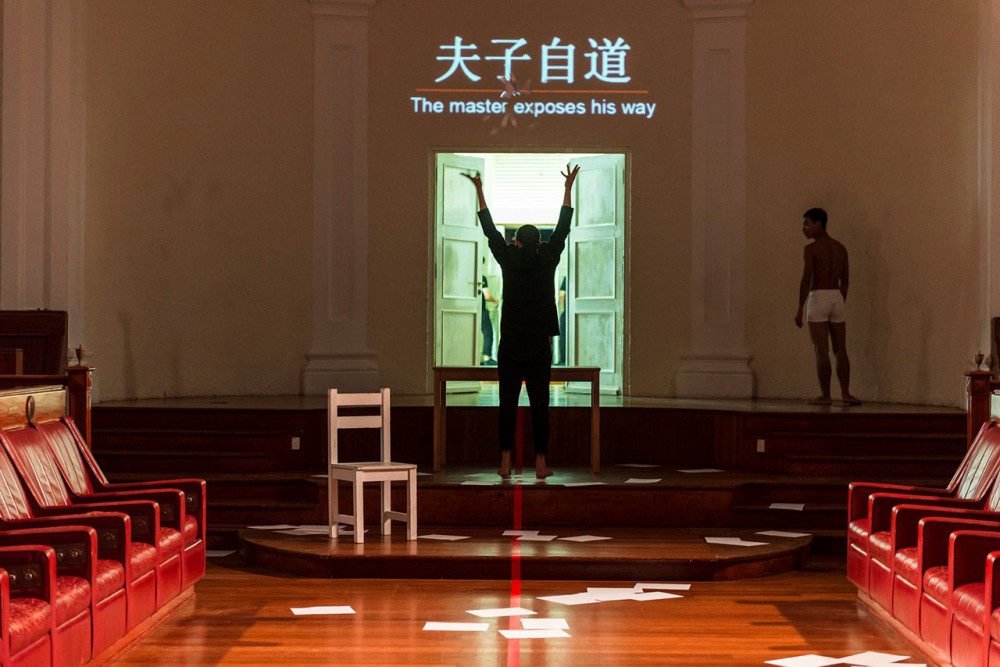 There are three constraints in a 1T2C performance: one table two chairs, two actors, 20 minutes. There are also three degrees of freedom these theatre-makers seem to be advocating: time, space and man. Knowing what these constraints are – stacking them up like a ladder – and using the least number of independent qualities to construct the frameworks of their plays, make for sharp and rhetorical theatre.

Degree of freedom, in mathematics, is the number of independent quantities necessary to express the values of all the variable properties of a system. A system composed of a point moving without constraints in space, for example, has three degrees of freedom because three coordinates are needed to determine the position of the point.