[Review] How Did The Cat Get So Fat indeed

10 May 2018
Article by Sam Kee
Photos by Crispian Chan, courtesy of Esplanade - Theatres on the Bay

How Did The Cat Get So Fat is staged under Esplanade’s The Studios: Between Living and Dying, and at the same time, fitting right into Esplanade’s Arts Programme for Schools: Feed Your Imagination (FYI). What do you get when you cross over these two themes? Dreaming.

That’s what nine-year-old Fatimah does. She (Siti Khalijah) plonks a 50-cent coin into the kiddie ride with so much zest, I could almost hear the chink of the coin diving into a puddle of more coins. She disappears in a red and white swirl, like an old paddle pop advertisement on a musty weekday afternoon. Her plastic lion takes her on a wild psychedelic ride. 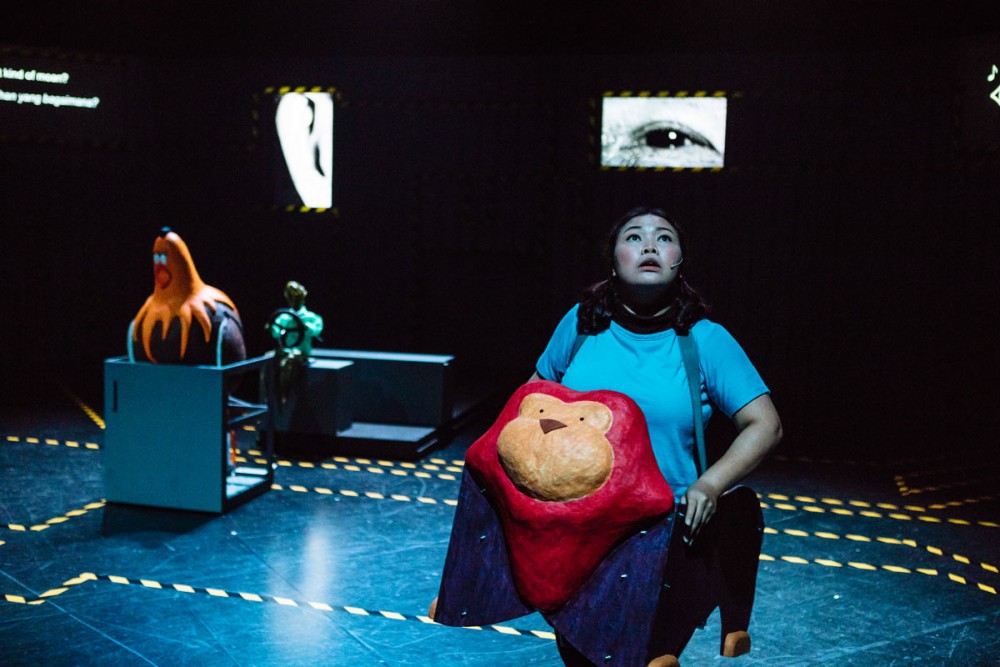 It is always a joy to watch Siti Khalijah at work. She manages to make us laugh and sob at the same time. The play is in Malay mainly, except when her character Fatimah speaks with her own Shadow in a made-up ‘F’ language. Siti’s rounded enunciation of words (like buu-ang, pen-ju-aal and some others that I can’t spell, sorry) drives the groove of her lines, which I imagine must have been well written. Because even though I don’t understand a word of it, the ebb and flow of the sounds of the syllables in the sentences is enough to keep the momentum of the play going. Coupled with Siti’s animated puppeteering, we have fun. 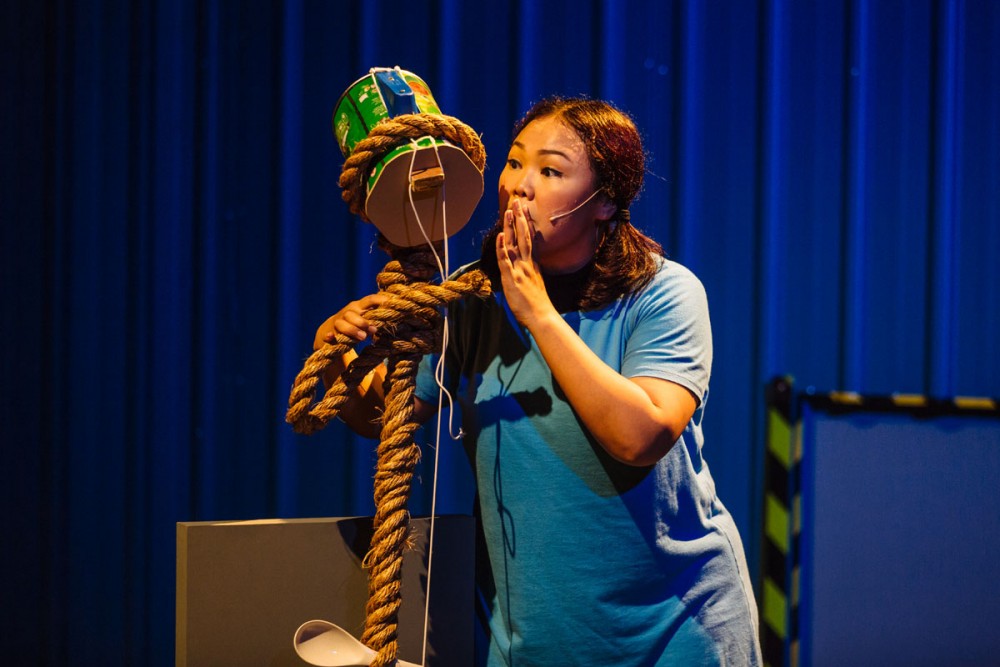 The scenes are demarcated by the puppet-figures Fatimah meets. Actress Siti channels different sides of herself enthusiastically to give these puppets their personalities, further enhanced by the eccentric household items that make up the puppets. The materials are so apt, the audience roars in laughter each time a puppet makes its entrance. We have the mop-head maid (ideal for mopping up her own tears), pandan-leaves taxi uncle, coconut-hen makcik, Milo-tin ah pek, Fischer scientist in a lab coat, scrunched-up-scarf Muslimah, Medusa-on-toy-car ‘MBS’ mascot. Of which, the ‘hijabi-fashionista' is a refreshing and witty update from the older text, replacing the Wife of the Husband arrested by the ISD. 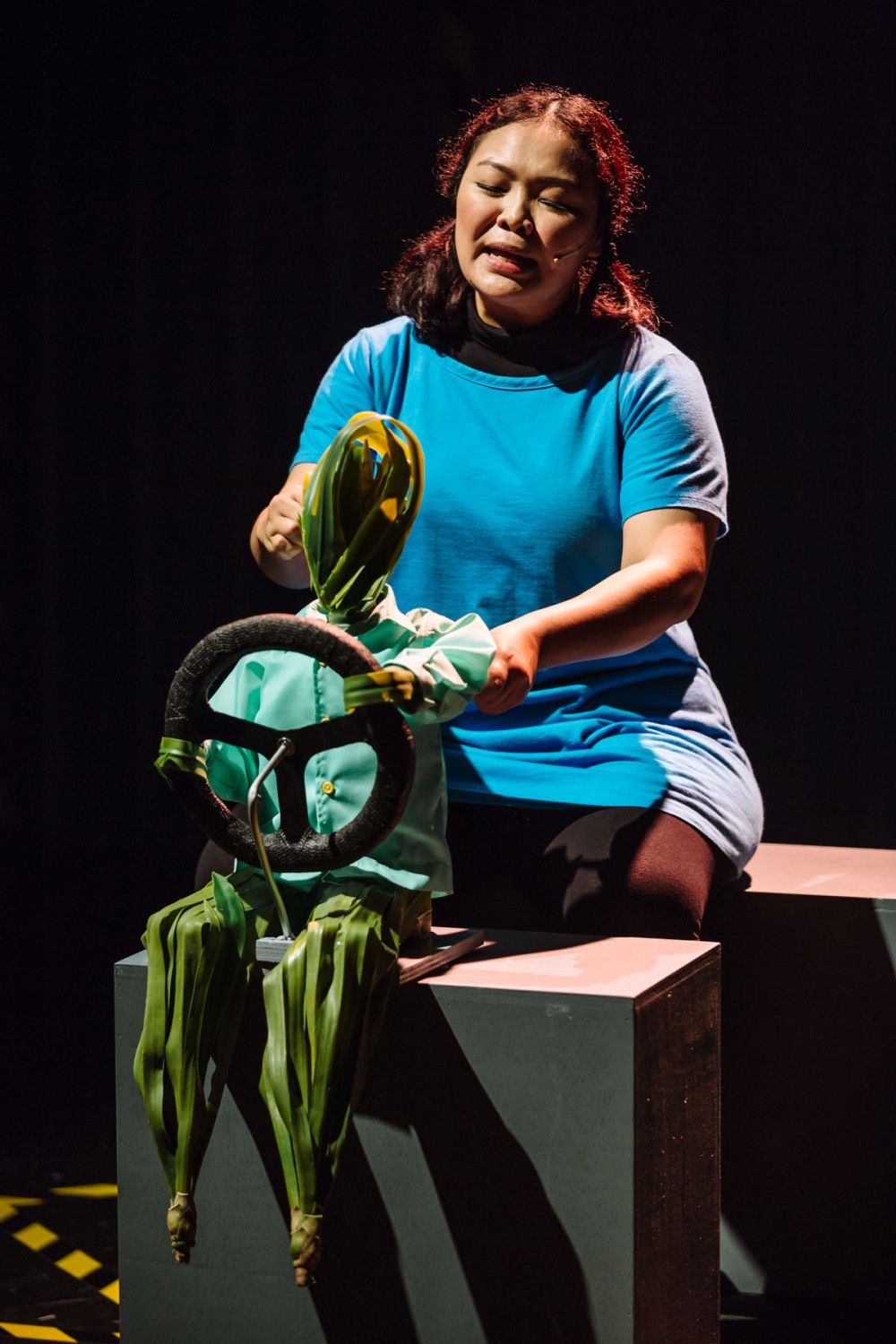 The play totes the airs of Five People You Meet in Heaven or Alice in Wonderland. Most of the audience would probably recognise that the play is reflecting the society of Singapore. And looking at the selection of characters by playwright Zizi Azah, it looks to me that Singapore does not seem much of a wonderland. So why then, in reality, might there be many people willing to believe that Singapore is indeed synonymous with the words ‘wonderland’ and ‘heaven’?

And in Singapore, cats do get pretty fat. You know why? There is a Stray Cat Sterilisation Programme, co-funded by the Cat Welfare Society, SPCA and AVA, supported by Town Councils islandwide to “promote responsible and humane cat management in all HDB estates” since 2015. It is rumoured that neutered cats have less dominant and territorial aggression, thus less driven to hunt for food and wait to be spoon-fed. Some of us are not sure if this is utopian or utopia-in-disguise... 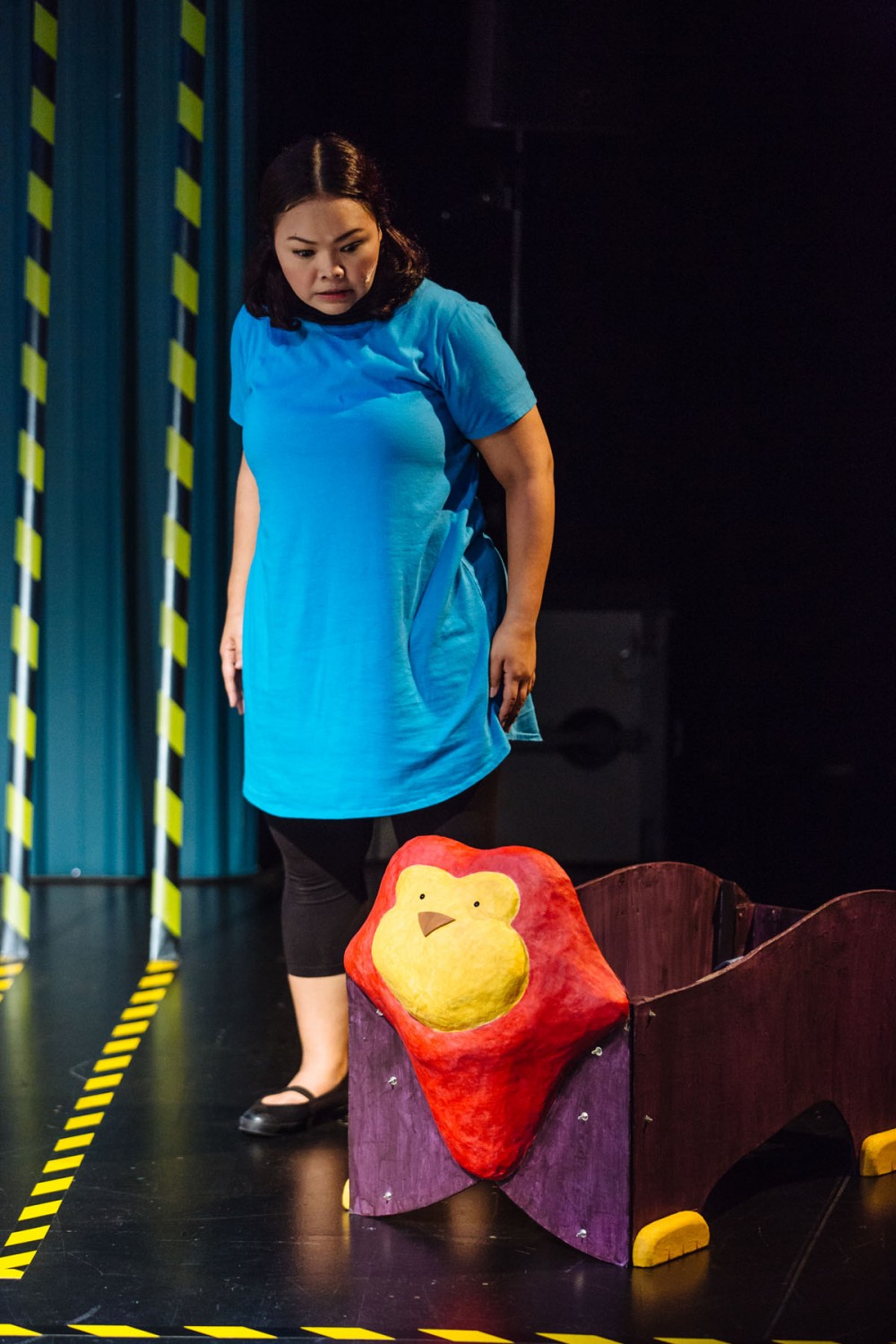 In the play, one senses the social ills, becomes aware of the disadvantaged, understands the vices of materialism and necessity of economic prosperity. As a responsible and active citizen, now is the point to ask yourself, are you going to put the blame on others or on circumstances, or are you going to think about how much is too much to give in and give up in the name of progress, comfort and prosperity? Will you dream big to find an equilibrium point on your own ethical scale? Or simply retreat into dreams as a form of denial and resignation?

Afterthought:
I think the contemporary video installation of the disjointed eye and ear, together with the mysterious abstract ending that appears to be an atomic devastation work to remove you from Fatimah's imaginary world, and ground you to reality. I see some speculations in other reviews wondering if the atomic mushroom cloud signifies wiping out the human population to 'start from scratch'. But I think it might signify the death of dreams and Fatimah's rejection of staying in a fictional 'perfect' world. If you read the English translation of Fatimah's dialogue with her own Shadow, she is asked to "close [her] eyes and prick [her] ears" to build a perfect world. But the play ended with her fist on her chest, tearing, yet choosing to continue believing in the pledge, despite having experienced the inequality.