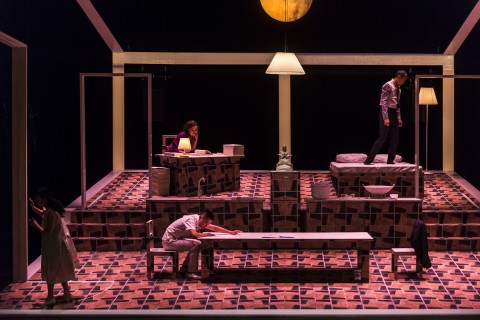 Citizen Dog is a dark and twisted fairy tale. Actually, it is just like any other Hans Christian Anderson’s or The Grimms’ fairy tale — they originate as cautionary bedtime parables with an objective to convey the consequences of evil deeds to children.

Upon entry, we are greeted with a homogenous tessellation that spreads across the floor and surfaces as if coaxing the three dimensional space into a flat plane, suggesting the surreality of the fictional world. The echoes of a song long forgotten paints an eerie, empty corridor in an abandoned building. The estranged atmosphere and futility of life work to build a narrative tension. 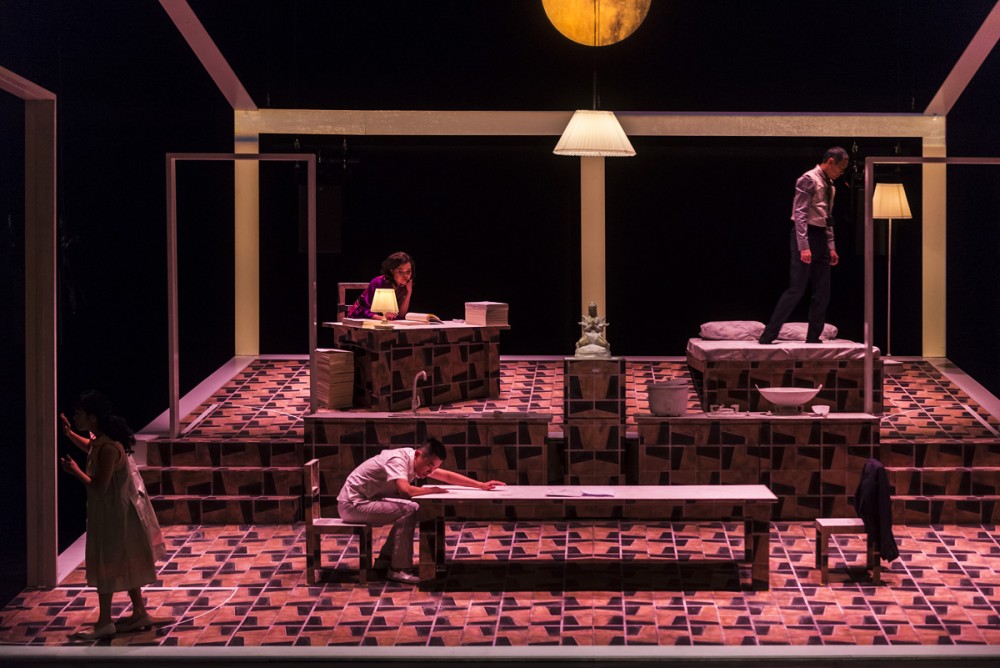 Besides, the alternative reality that the protagonist Mr Pu (Liu Xiaoyi) is penning in the play seems to reward the good (albeit temporarily) and punish the bad. Mr Pu finds a soulmate in Ah Xiu (Li Xie) and enjoys a night of passionate intimacy; the diligent but dim-witted Wang Yuan Feng (also Liu Xiaoyi) tastes the tip of academic success and the awakening of love. However, these good episodes are short lived to emphasise the impermanence of life and that no good things will simply fall onto your lap for keeping.The lewd and corrupted Land Authority Officer (Alvin Chiam) Wang Tai Chang loses his sons/ Bai Jia loses his genitals (pointing to one of the worst punishments for a Chinese man — to have no sons to send him off at his funeral). The crook gets served what he deserves. Isn’t this the equality and justice that everyone on earth wishes for? 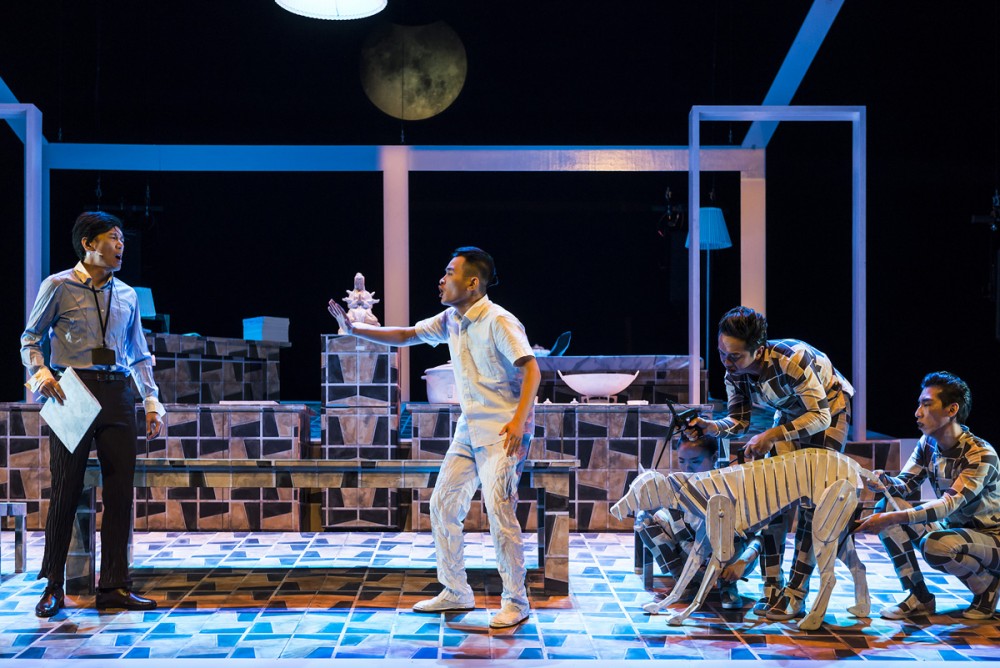 In both stories, or alternative realities, the Land Authority Officer seems to hold the bargaining power. He can choose to assist (or not) the resident of the house whose lease is up if he has materialistic gains. In the power struggle between Mr Pu and the officer, Pu rather cut off a piece of his flesh than to give up his faith or his dignity. In Xiao Cui’s story, she sacrificed her most loyal companion, White Dog, in order to earn herself the title to become the legal wife of Wang. Both residents bend themselves to the will of the circumstances imposed on them, and try their best to adapt, to survive. But both protagonists in their respective stories do not have a good ending.

This is perhaps why Mr Pu writes. He writes to escape his reality; he desires justice and fairness which he cannot attain in his life. He wishes all sinners get punished for their evil deeds, likewise all hardworking citizen gets rewarded. But it is not so in reality. In the end, a dream is but a dream. He still has to face the reality of being alone, being unsuccessful and the expiration of his leasehold. He commits suicide in the end.

But let us think again. The Land Authority Officer may have the power to negotiate personal gains, but he, too, does not escape the claws of retribution. It prompts us to think whether the power lies in the hands of the official or someone higher up. 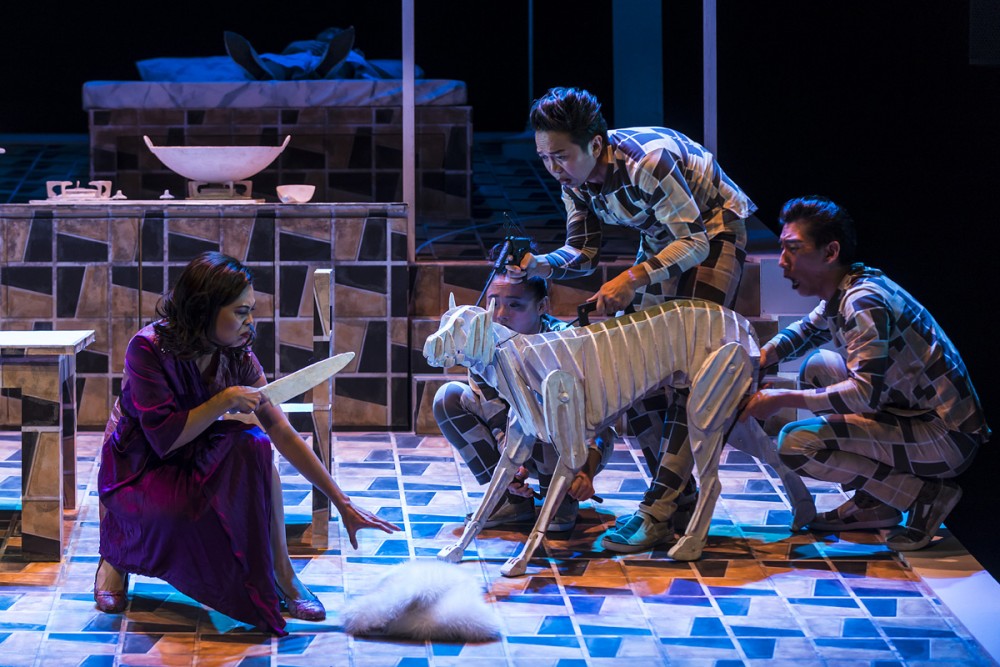 Also, it is no coincidence that the two persons who managed to wriggle out of their tight situations are Ah Xiu and Xiao Cui (though not without sacrifices), are not local, judging from their accents. Perhaps then, their parting words to their respective lovers hold some other meaning than the surreal idea of ‘mortal bones’ vs ‘immortality’. Given their identity as ‘aliens’ as stated in the programme booklet, or ‘the other’, we can see them as foreigners in our society who are more willing and accustomed to taking risks. They bear to leave everything behind in this place and restart elsewhere, whereas it is harder for locals to leave the security, complacency and comfort of their home to start anew somewhere else. The play seems to suggest that if you have the courage to leave, you may be able to break free of the current shackles tying you down.

The set does not take up the entire stage and the thin, flimsy beams barely hold up the house, exposing its fragility. It reminds me of a doll house — a wind-up doll house, and that there is a greater being or creator who is engineering the entire story. A creator winds up the mechanical spring of this doll house and its occupants run their courses. At the end of the tale, the characters are spent, drained and exhausted, much like a wind-up toy. It is also intriguing to note the lighting design nearing the end of the play: The lamps light up both wings of the stage to highlight the alienated ‘house’; the flickering lights made by rotating lamps above the ‘roof’ further accentuates the existence of a ‘greater being’ flicking the light switch on and off on this doll house. The omnipresence of the white dog (meticulously crafted by Oliver Chong and Jack Chen) skillfully puppeteered by Trey Ho, Ann Lek and Darren Guo, underscores the theme of manipulation in the play. 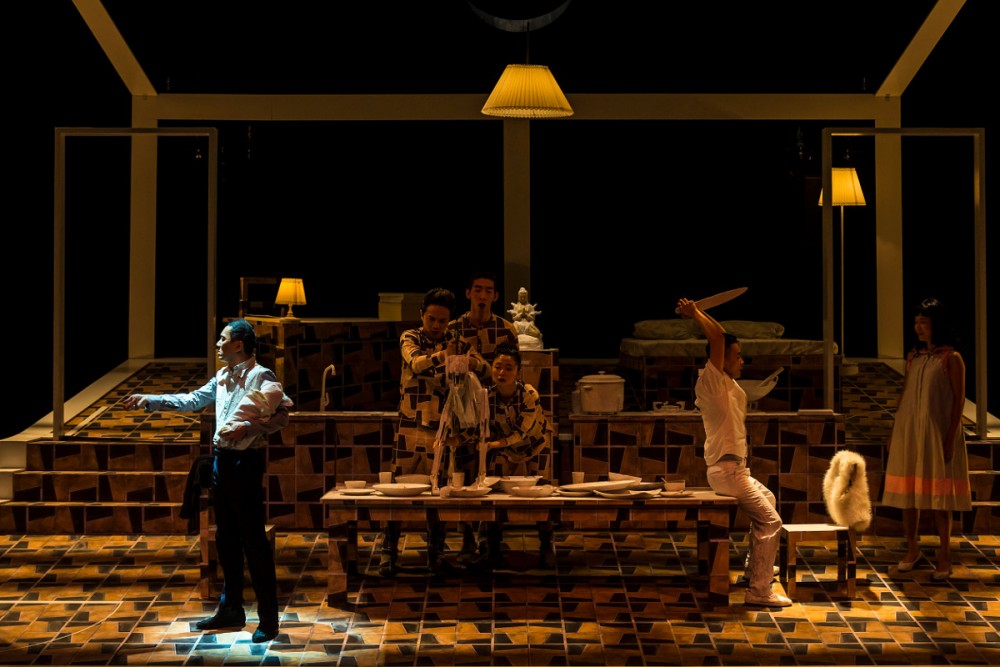 Inspired by Liao Zhai Zhi Yi (Ghost Stories from a Chinese Studio), Citizen Dog stays true to its derivation. Written in the late 1600s and published in the mid-1700s, Liao Zhai focused on the daily lives of commoners, exposing vices of the society and criticising its governing authorities. The author, Pu Songling, uses these supernatural tales to criticise injustice in the society. He also seems to sympathise with the poor or the underclass. In a way, the play carries forward Pu Songling’s social criticism to the 21st century. Besides shedding light on the impending issue of public housing’s expiring lease, the play retains Liao Zhai’s twisted and imaginative flavour. The bizarre episodes and strange correspondences highlight the actions and decisions that characters are forced to make in lieu of their immediate difficult circumstances, revealing true attributes of human nature at large. Director Oliver Chong, who also designed the set, and his sound and lighting designers (Darren Ng and Lim Woan Wen), have successfully weaved together an urban realism and an eerie fantasy.