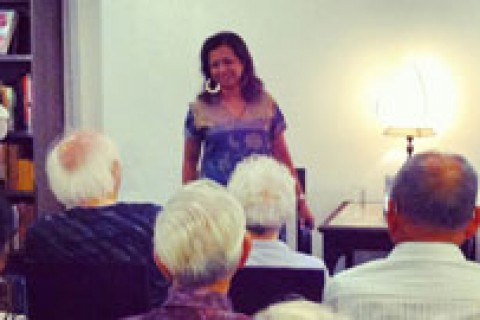 I stumbled upon her book launch at Select Bookstore on my way to the Peranakan Museum for a Singapore Writers Festival (SWF) event. Benches were arranged in a corner and a cosy little reception was going on whilst I decided to peek in. I asked the cashier if there was an event happening; and he said yes, a book launch is going to take place in a while, in fact, the writer is standing next to me! I turned, and saw Marina Mahathir, daughter of Malaysia’s former Prime Minister. She was here on the basis of SWF, and I count it on my luck to bump into her drop-in at Select for a peripheral book-launching event.

Select is a quaint book store, almost akin to the Adult Reference section of our community libraries. Coincidentally, according to the owner of the place, Select used to be the Chinese library of Mr Sun Yat Sen during a revolutionary period of our history. 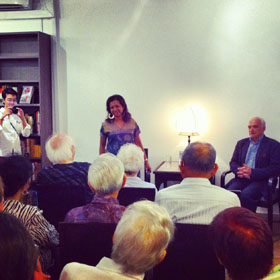 Marina’s Telling It Straight is a compilation of some of her best articles from the musing columns of The Star. She talks about life in Malaysia, which essentially discusses the humanity of Malaysia. Having been contributing to this fortnightly column in the newspaper of her homeland for the past two decades, Marina’s sharp opinions seemed well known amongst her ‘column fans’, some of whom were amongst the audience. She mentioned that “when more people agree with your point of view”, your opinion “kind of gets validated”. And I believe, that comes as a relief to a writer because it is no longer merely your own individualistic point of view, but that this opinion is shared and resonated. The writer has become a voyeuristic tool for the majority of the public.

We took the opportunity to chat with Marina Mahathir at the end of the launch and book-signing session. (She is, by the way, a very patient and personable woman.)

On the topic of Humanity, given our cultural diversity in both our countries (Singapore and Malaysia), how could/ would you define cultural identity?

I don’t think that there needs to be a concrete, well-defined identity for each person. Take for example my daughter, she is half-French, half-Indonesian, I do not want to impose on her a single fixed notion of cultural identity. We do not even know what the world would be/ what kind of world she would grow up into, we cannot foresee the future. I do not think that we should force upon them, a confined, defined notion of cultural identity. It is good now, we are lucky to be living in a diversified nation, where we get to experience a bit of everything, of every culture.

Is a cultural identity to be found or to be created?

Ever since Penang was preserved as a UNESCO Heritage site*, they (I suppose she meant the people there, the life of the people and perhaps, even the history of the place) are able to move on and look forward. And I think that is a very good start.

Is it any easier for Malaysia to have a cultural identity? Because from my point of view, it seems that at least Malaysia has (and is executing) her National language, (which is the Malay language. It is the same National language as what Singapore has, however we agree on using English as a working language) and values anchored about faith?

It may be true to a certain extent. But sometimes, we meet difficulties in our education system.

At the end of our conversation, I started asking myself, why do we need a cultural identity? Do we necessarily need to define our identity? I re-thought about the theme for this year’s SWF – Origins, and recalled what I’ve written earlier on the preset of the Festival:

“The fact that people of the nation is provoked due to the effects of Singapore accepting a large intake of foreigners, shows that an apparent discrepancy exists between us and the others. This growing conscious awareness of the difference between us and them is starting to invoke a sense of identity, or at least the desire for differentiation.”

I suppose I was too bent on searching for a definition that fits an entire nation that I was quite taken aback when I realise I have to agree with Marina’s words on not having to impose a fixed notion of cultural identity on any person. Because eventually, everyone seems to be moving towards being a citizen of the globalised world. Therefore, I am thankful that our society is gradually awakening to this idea of an identity and that our country is setting up the platforms to allow our people to explore the idea of having one. It would serve as a good reminder of who we are and who we want to be.

* George Town of Penang and Melaka were jointly designated to be a World Heritage Site as the “Historic Cities of the Straits of Malacca”, referenced from http://whc.unesco.org/en/list/1223, UNESCO World Heritage Centre, 1992 – 2012.