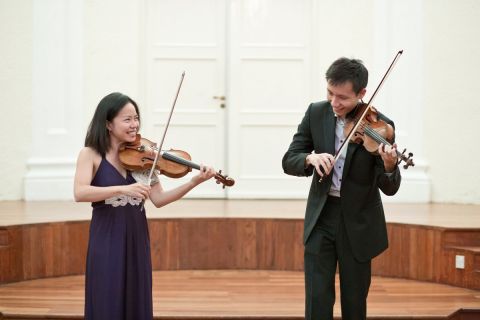 Even though they were written 300 years ago, Bach’s six sonatas and partitas for solo violin remain one of the most important collections in the violin canon. The Bach 6 presents a colossal challenge for any violinist because its interlocking melodies and multiple stops defy the conventional single-lines that characterise most violin works. The music is both technically and emotionally demanding and I was really excited to attend the second half of this ambitious recital. 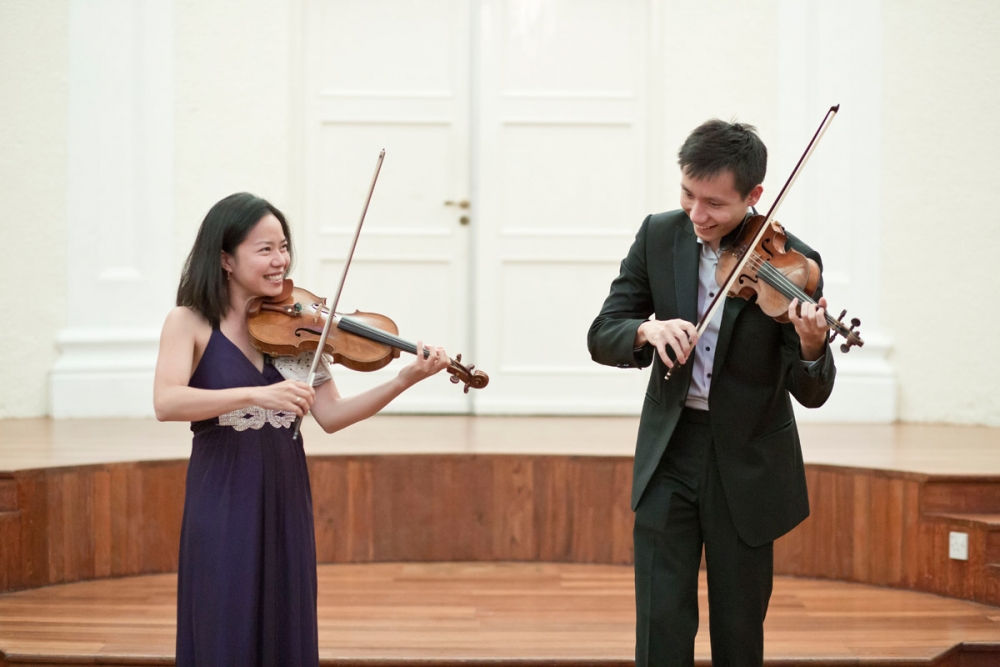 The evening begins with Kam Ning’s performance of Bach’s Partita No. 2 in D minor (BMV 1004). Kam’s meticulous attention to detail over the dynamics and articulation of the opening Allemanda soon becomes evident; the terraced dynamics that characterise Baroque music are present yet not overly dramatic and her measured use of slight rubatos allow the lyrical melodies to sing without affecting its steady tempo. She navigates through the rest of the piece with elegance and poise before arriving at the notoriously difficult Chaconne, which begins with a series of sonorously rich double stops. Kam skilfully brings out the layers of fugal melodies whilst maintaining its rich contrapuntal texture. At some points, she deliberately allows the lower notes to ring out more against the echoes of the high notes, which creates a deeper sound. On the whole, Kam not only highlights the distinct character of each dance but also transitions between them smoothly. For me, it was this sheer degree of control over both the instrument and the piece that renders her performance of the Partita particularly memorable.

The next piece is the more exuberant Partita No. 3 in E major (BMV 1006), performed by Loh Jun Hong. The lively Preludio opens with a bright and sparkling sound, contrasting the more tentative Partita No. 2. With his impassioned playing, Loh makes the fast passages of running semiquavers seem almost effortless, which is no mean feat. As the melody alternates between the high and low registers of the violin, he creates an impression of texture whilst playing each phrase with extreme clarity. Even as the passages diminish in volume, the notes remain clearly articulated – a true testament to Loh’s technical ability. As any classical musician would tell you, one of the most difficult things into do is to play a fast passage quietly without compromising its musicality. Another highlight of Loh’s playing is the pureness of his intonation between the stops and his use of vibrato, which really allows for the high notes to sing out.

After the intermission, Kam takes the stage once again to present the final piece in the Bach continuum – Sonata No. 3 in C major (BMV 1005). Kam really takes her time to develop the sound of each chord and her careful selection of which melodic lines to emphasise becomes apparent in the Fuga section. Her virtuosity lies in her ability to not only bring out two melodies simultaneously but also do so in a manner that creates an illusion of multiple violins playing in harmony. This delicate balance between the voices is no doubt the hallmark of Kam’s performance. The night ends with Loh’s performance of Ysaÿe’s Sonata in A minor (Op. 27, No.2), which provides an interesting contrast as it borrows material from Bach and yet remains distinctively “20th century” in character. My favourite section is definitely Les furies, as Loh manages the sudden transitions between the loud and soft passages smoothly and brings out its intense and passionate nature, thus allowing the concert to end on a dramatic note.

The soft wash of warm light in the wooden Chamber creates an intimate setting and its acoustics allow for the sounds of the violin to resonate beautifully in a hall filled with 200 people. However, it is also unforgiving towards the musicians as any slip in sound would be immediately audible. Nonetheless, both Kam and Loh’s sensitivity to the nuances of the Chamber and the pieces enable them to deliver a brilliant showcase of intricate counterpoint and polyphonic acrobatics, which makes for a truly wonderful evening.