[Review] Dragonflies focuses on climate change, adaptation and the survival of the fittest 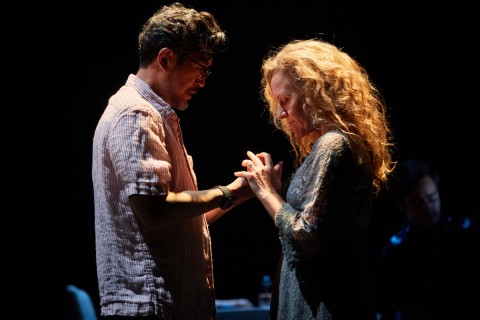 Dragonflies’ plot is a circle of life. The play starts with death, then a series of unfortunate events that takes place in Singapore, then death, and finally it ends with an optimistic life-giving scene. It is interesting to note that the play seems to begin with the end — the back of the orange canopy where Maxine (Elizabeth Morse) gives birth — and ends with the frontal view of the same canopy, completing the loop.

Chronologically, the story starts with protagonist Leslie Chen (Adrian Pang) introducing his wife, Sarah (Shona Benson) in a touching eulogy in London, his home. The set consists a thick slab of black c-shaped platform lying on the stage, looking like flat marker for a tomb. This shape, an open circle, hints of a missing link — a broken cycle. The relentless shower reflects the gloomy state of London and also Leslie’s despair. The first scene introduces both the protagonist and the environment to be off-centre.

Dragonflies, the namesake, also alludes to the migratory pattern of dragonflies, recently found to be the longest travelling migratory insect. The play maps the migration journey of the protagonist and his (step)daughter, Maxine. Both migration happen to be forced by weather conditions, but the latter pair faces additional political troubles to complicate matters. 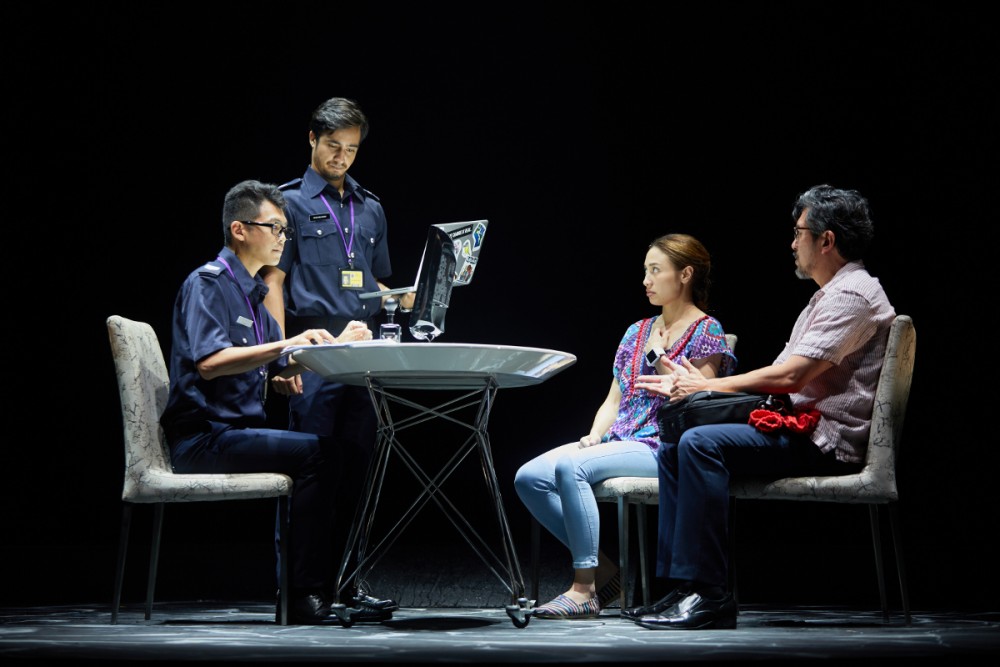 First, an uncanny storm destroys Leslie and Maxine’s house before they could inherit or sell it. Becoming homeless and risking becoming an ‘alien’ in London due to Brexit’s new regulation, Leslie is encouraged by Maxine to make the move to sunny Singapore. The dreadful storm acts as a trigger for their migration, just like dry weather is for dragonflies. This constant hint at climate change keeps surfacing as a didactic theme in the play. 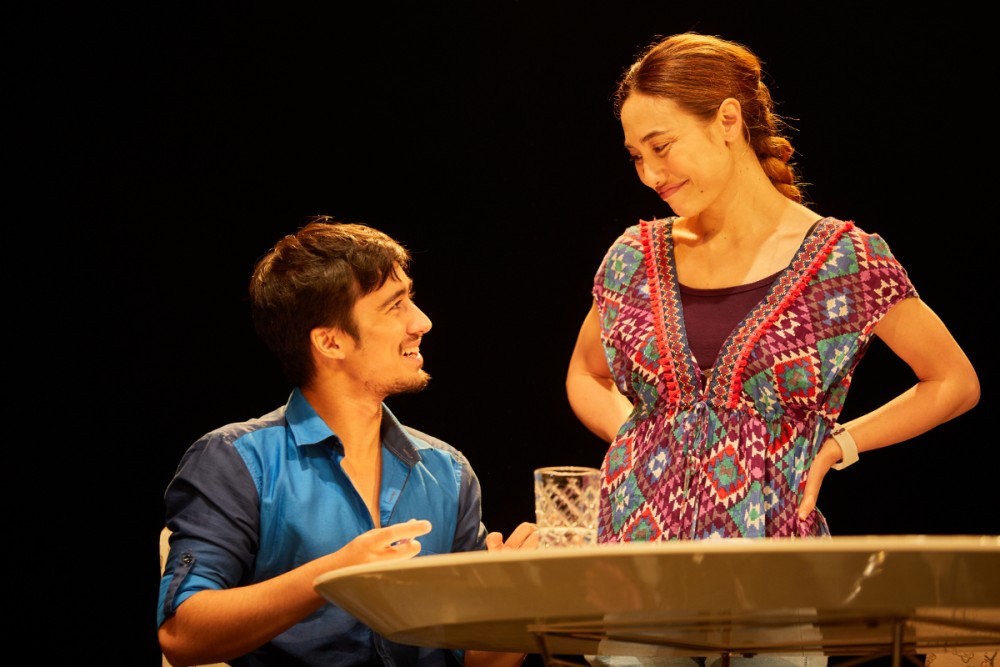 On the other hand, Maxine embodies sunshine, as if taking the place of her mother. She organises Leslie’s life and makes the decisive push to move what is left of the family forward. She is the altruist who ensures everyone’s welfare is taken care of, upholds equality and justice for migrant workers and the one who ends the play giving birth (to hope) against all odds. Actress Elizabeth Morse takes care of the role with a youthful optimism and cheerful glow.

Twice, death pushes Leslie and his stepdaughter to move from one country to another. They think the former is home until they move to the next. Is London still home without Leslie’s wife, Maxine’s mother? Can Singapore still be home after Leslie lost his mother? Will they ever get used to the rigidity and the heat of this island state? All the while we see that Leslie does not stop evoking the memory of his wife throughout the play as an escape or relief. The turning point in the play comes after the powerful scene where Leslie dialogues with the ghost of Sarah, who has remained silent until now. Leslie is reminded of the living’s instinct to adapt and to press on for survival, which effected a mindset change in him. Strictly speaking, he convinced himself, since the conversation is only a fragment of his imagination. 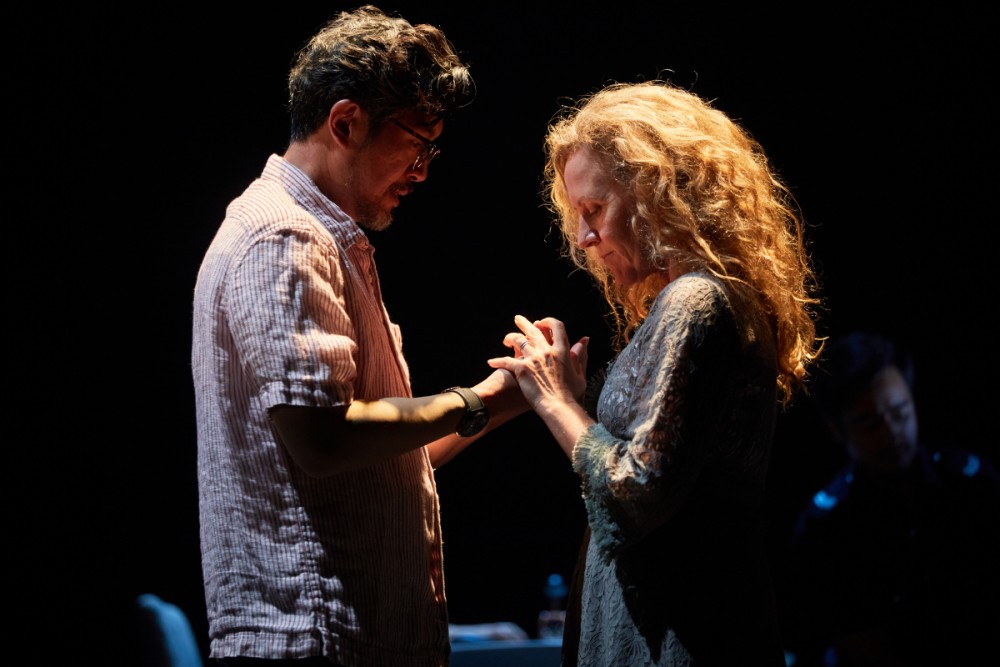 The choice of the play’s title Dragonflies is as apt as unique. Dragonflies do have a reputation for symbolising self-realisation and transformation that fits the theme of the play. And I really like the mechanical fluttering sounds of dragonflies substituting for the silent cries of the characters.

If the play has indeed intended to play up the environmental theme and the adverse effects of anthropogenic factors on climate, then a problem lies in the ending. The play wraps up with a racial tension instead of an incident attributed to the wrath of nature. Although this issue of xenophobia ties in with the mini episode of racial spite at the hospital and the Tekka Market riot in Little India earlier in the play, the emphasis on xenophobia at the end dilutes the didactic message on climate change. 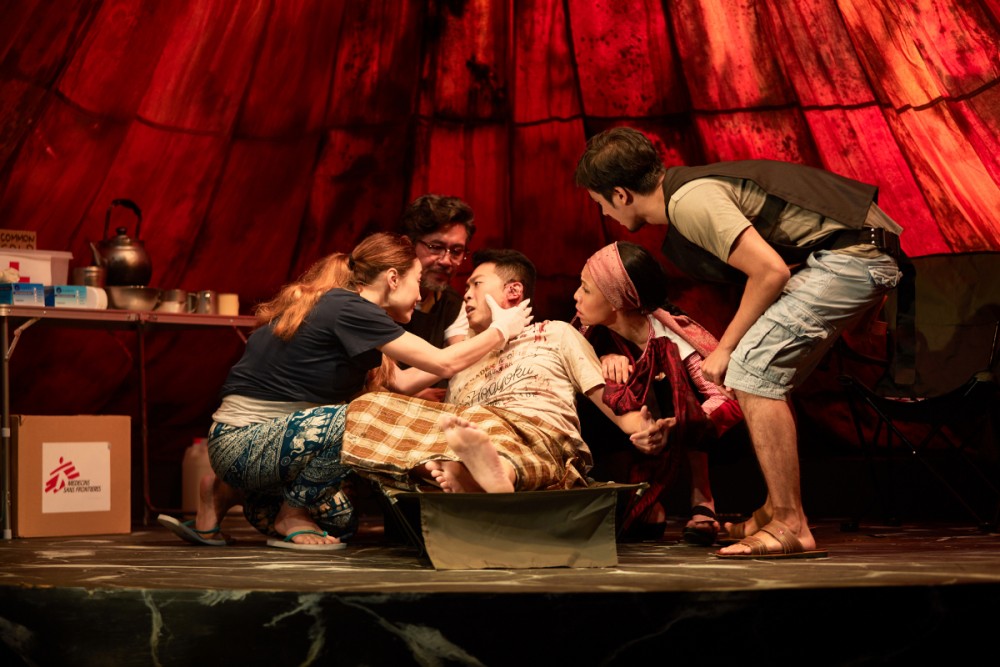 As a result, the call for transformation or reversing the effect of climate change does not come through strongly enough to induce a paradigm shift in the audience. Also, the issues discussed in the play are not new. In fact, the Little India riot took place five years back and the alcohol ban three years ago. Just like Leslie’s geography lesson to the self-entitled kids, the play’s moral messages seem a little dated and become hardly effective. 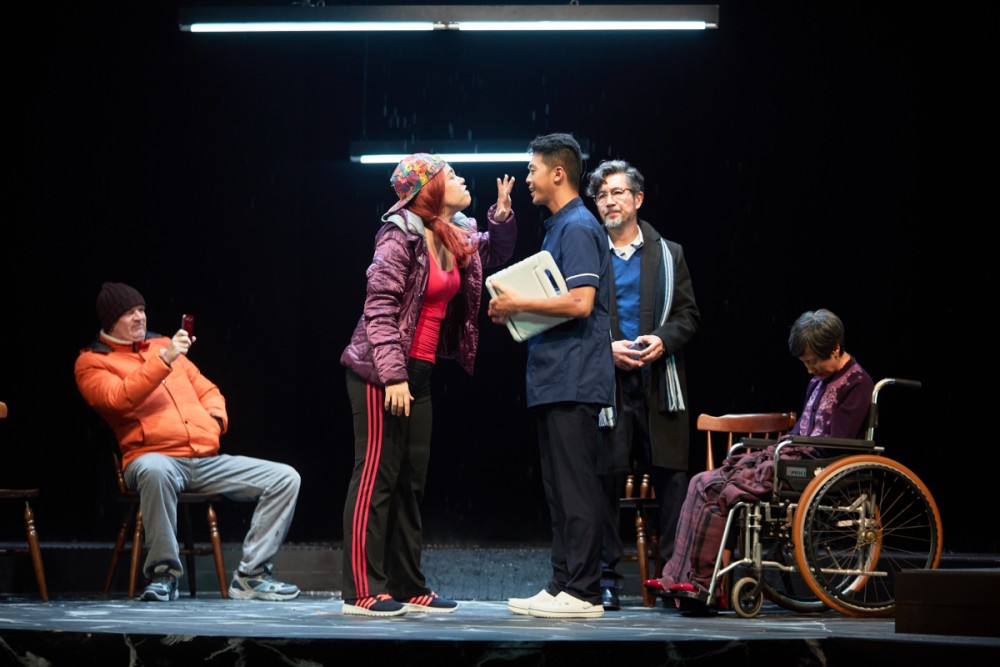 I also wonder if the characters are intentionally kept one-dimensional to keep the story easygoing, in order to cover so many issues at once. For a show that was commissioned by SIFA last year and also bagged the award for Life! Theatre Production of the Year, I'd have expected it to raise harder questions or offer deeper, fresher, critical insights.