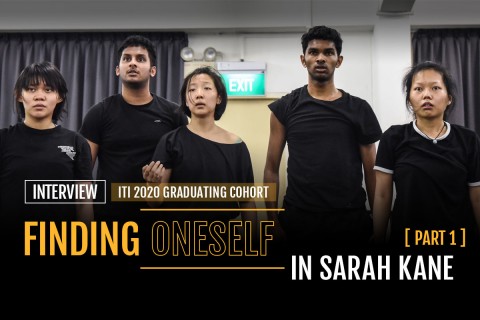 The graduating students of Intercultural Theatre Institute (ITI) are presenting 4.48 Psychosis by Sarah Kane this year. Combining lyricism with dark humour, the play is an unvarnished look at the difficulty of questioning and communicating with the outside world through the lens of depression. ITI will be putting a fresh, multicultural spin on this modern classic. They will be directed by award-winning director and ITI alumnus Andy Ng Wai-shek.

We spoke to the 2020 graduating cohort of ITI in two parts to find out their first impressions of Sarah Kane’s text and their experience working with director Andy Ng. 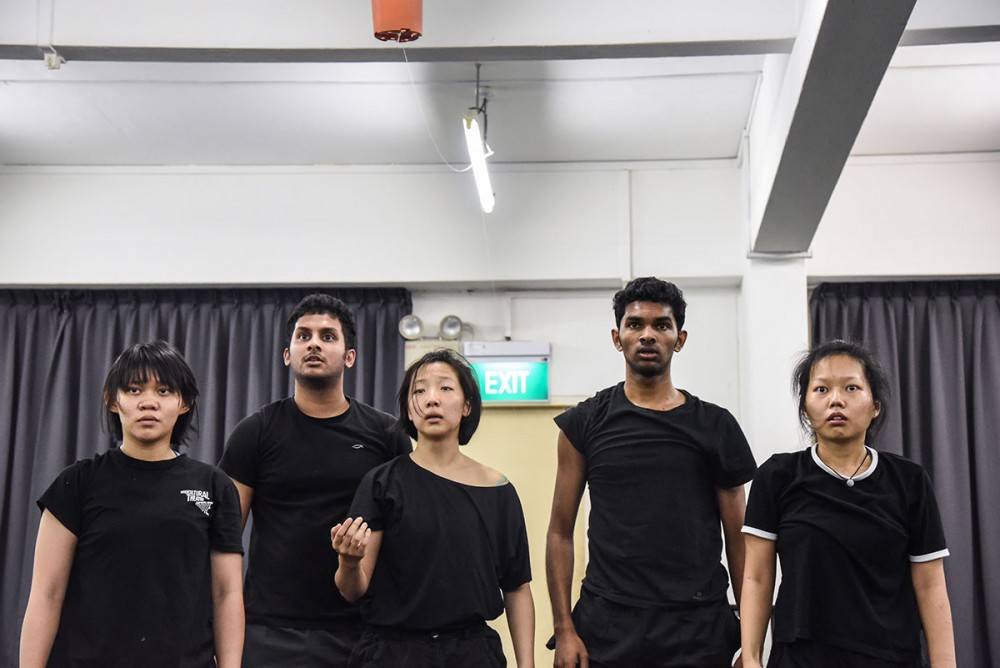 1. I had an interesting encounter when I picked up the playscript from the library@esplanade a few years ago. The previous reader stuck a post-it on it, describing the performer’s costume should be made from white sheets. What did you imagine your role was when you approached this script? As the protagonist? Or perhaps as an onlooker? Why?

Rhian Hiew Khai Chin: When I read the script for the first time, I felt a heaviness from the text’s vagueness and darkness. But after reading it a few more times, I found myself wanting to know more about the script, and a huge curiosity of how to stage 4.48 Psychosis. In the process, I see myself as both a storyteller and character. In some parts, I embody the storyteller attempting to understand what happened to this person, and experience the journey with her in the scenes of 4.48 Psychosis.

Ramith Ramesh: Actually I didn’t think of a role first, because to me it was not just characters. There were lots of images that stuck in my head, so I was deeply connected with those images. I was eager to portray images rather than a role.

Prajith K Prasad: Maybe it’s just me, but I honestly couldn’t imagine much. However, it did remind me of a lot of things that I wouldn’t normally think about, such as death, clinical depression and hospitals. So now after being asked this question I can understand why the performer’s costumes can be made from white sheets. 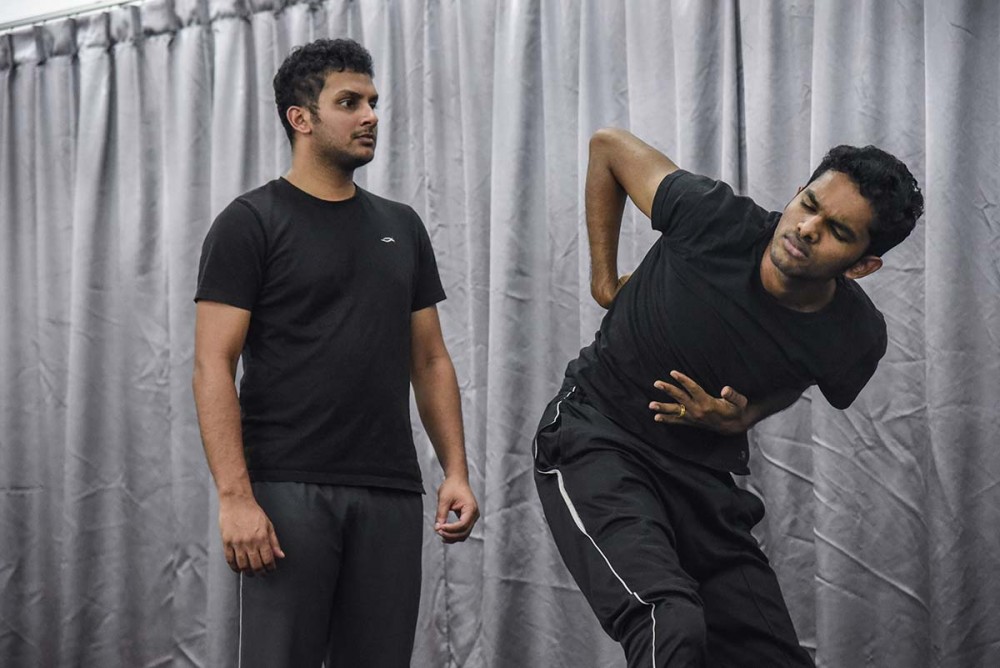 2. Was there any difficult experiences to look within yourself while working with the script or with your director? How did you navigate that? And where do you wish to move towards?

Prajith: Indeed, there were a lot of obstacles towards approaching the text, but the director made it easy for us as he made the form so palpable. And it, of course, asked a lot out of me as an actor to work this out in order to deliver since it is a subject with such great intensity. How I did that was only because of the training that I had from ITI and it also helped that the director was also a graduate of the school so we shared the same vocabulary.

Ramith: Indeed, there were a lot of difficulties while working with the script. Since we were approaching 4.48 Psychosis as a multilingual production, it required a deeper understanding of the text to connect with each other. Some of the parts gave me a headache to understand - why did she say these words? How do I adapt that into my performance? How do I deliver it in the way Sarah Kane wanted? These were the questions stuck in my head. Fortunately, as our director is an alumnus of ITI, he helped us cook this production in a very healthy way. Our training in ITI helped us deliver the text through our bodies as well.

Rhian: For me, the most difficult experience is having to keep digging to look deeper within the script, even up to the last moment of the play. It has definitely been a different experience in terms of approaches and aesthetics with director Andy Ng, and I’ve learnt a lot from him. 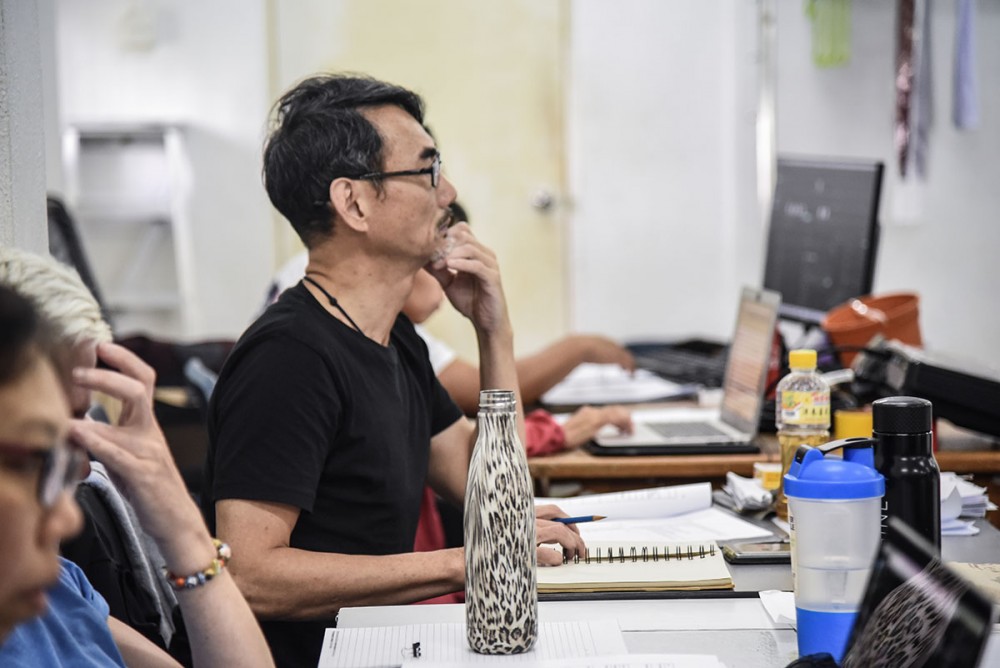 At the end of the interview, Prajith hopes that the audience will experience the show by accepting the invitation from the performers and the director to imagine what it would be like to be in this world of Sarah Kane’s 4.48 Psychosis, which, like Ramith has mentioned earlier, is like a special dish that they have “made together with the taste of different cultural perspectives and languages”. He hopes that it will be a visual and musical treat for the audience, to which Rhian adds that even with their eyes closed, she hopes the audience can listen in and still feel something; as long as you walk into the theatre, regardless of your status, she hopes you will feel embraced by the performers/performance.

Continue to Part 2 of the interview!