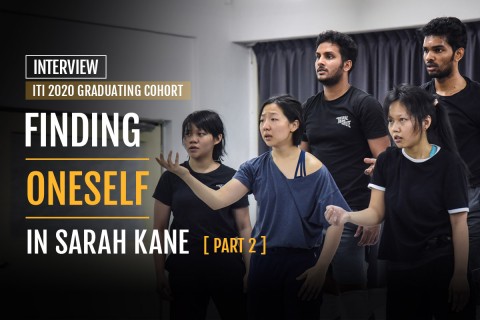 The graduating students of Intercultural Theatre Institute (ITI) are presenting 4.48 Psychosis by Sarah Kane this year. Sarah Kane's final play, 4.48 Psychosis, takes on a unique form that tries to communicate the experience of suicidal despair. They will be putting a fresh, multicultural spin on this modern classic, directed by award-winning director and ITI alumnus Andy Ng Wai-shek.

We spoke to Kyongsu Kathy Han and Li-chuan Lin (a.k.a. Aki) who have had previous encounters with Sarah Kane’s 4.48 Psychosis. 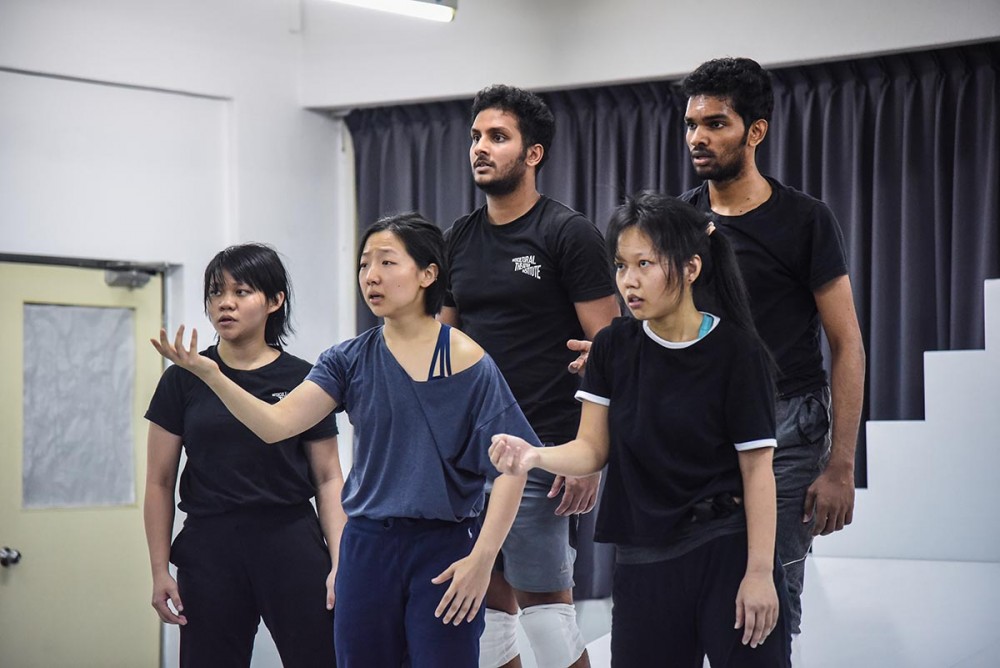 1. What did Sarah Kane’s work (specifically 4.48 Psychosis) do for you when you first picked it up?

Translation:
I first picked up this script 6 years ago when I worked in a theatre company as a marketing person in Kaohsiung, Taiwan. I have been suffering from emotional problems: I am sensitive, depressed, anxious and cry easily. Hence, I was shocked when I first saw Sarah Kane’s text, the thought in my mind was: I know. I understand. I know the agitations, the pain and the loneliness. I also had a feeling that "someone understands me". There were a few lines in the text, such as "I know it's not my fault. You've told me that so often I'm beginning to think it is my fault." or "Validate me/ Witness me/ See me/ Love me", which were the words that I wanted to express but couldn't.

To be loved. To be saved. To be seen. To be understood. Those were the thoughts or wishes that I had after I read the script. Also, I wish those who come to watch this play will come to understand that there is a group of people who are sensitive and depressed and hope that someone will extend a helping hand to them.

Kyongsu Kathy Han: The words on the page stirred something deep inside me. Not everything made sense, yet there was a deep understanding. The script felt heavy in my hands, and I knew I couldn’t take anything for granted when it came to Sarah Kane’s last work, her last human effort to connect with the world. 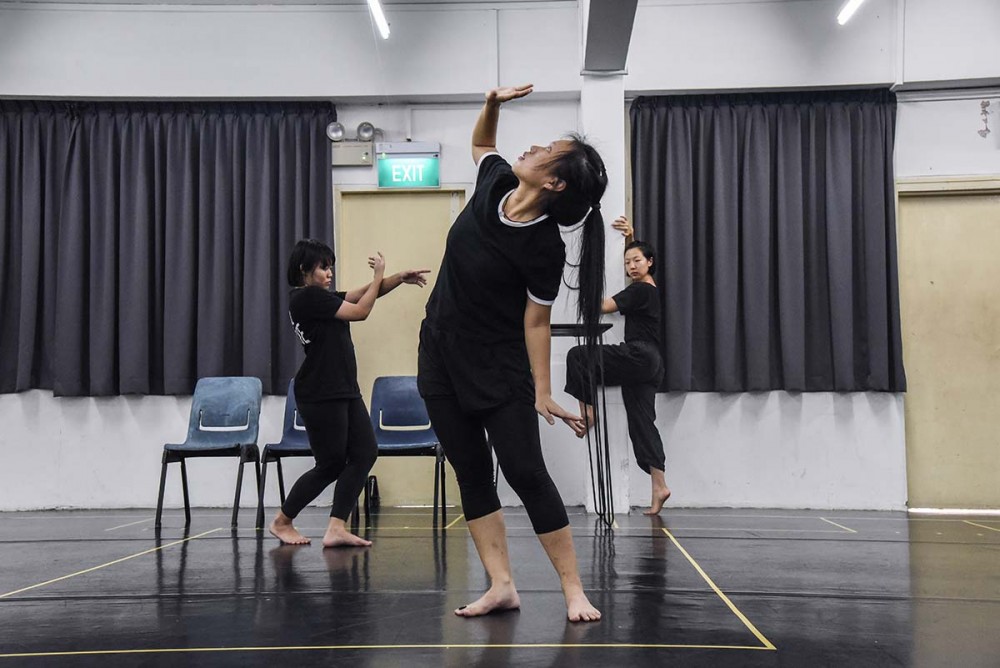 2. Did you have any previous experiences in watching Sarah Kane’s work or any adaptations of 4.48 Psychosis performed by others? How was the experience different from your current experience interpreting it?

Kyongsu: I did a production of 4.48 Psychosis when I was at LASALLE, directed by Natalie Hennedige. So I was quite baffled when I heard that I would be doing 4.48 again at ITI. I recalled the intensity of the work, the deep searching I had to go through as an actor and as a person. Truth be told, I felt daunted by the task of doing it again. But throughout the process, I began to appreciate this unforeseen re-encounter. The interpretation is different, the ensemble is different. And though I am constant, I too have changed. It was interesting to see what has changed and what still remains the same. The dualities were rich, and I learned again.

Translation:
I watched 4.48 Psychosis twice – the first time was in 2013 and the second time was in 2014. Both of them were productions of a theatre company in Taiwan that I worked for in that period. The first difference is language. The productions in Taiwan is in Mandarin, which is my mother tongue, so I can understand and make reflections easily and quickly. The second difference is the performers. The productions in Taiwan were performed by two actresses who looked like twins. They were one but performed as two bodies. They sometimes rely on each other, at other times they fought.

The performers for our 4.48 are from four different countries and cultures, so of course, there’s going to be a big difference. Our graduating piece combines 4 languages, so I am unable to infer too much too quickly from the languages since I don’t understand some of them. Therefore, we need to consider the tone of voice, the change of breath and the rhythm of speed to build our characters. We are not only thinking about the "information of words", but also "the musicality of language".

In my opinion, although we have different appearances, voices and physical work, we can treat that like the different perspectives (whether expressed or not) of a single person, speaking up in sync about depression and asking the same question. 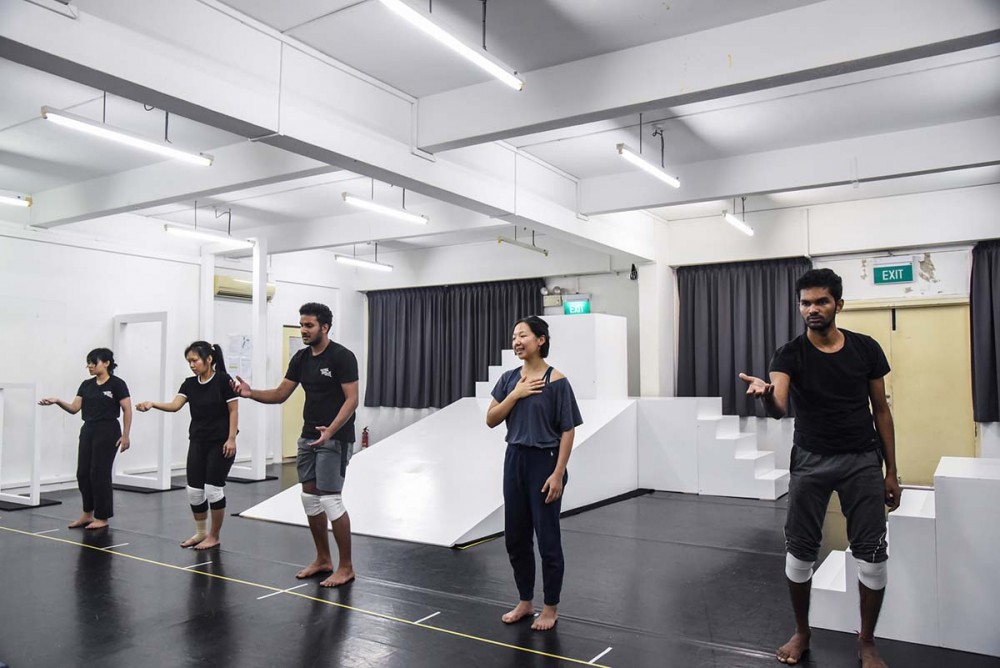 3. What did you imagine your role was when you approached this script? As the protagonist? Or perhaps as an onlooker? Why?

Kyongsu: When I read the script, I see a mirror reflecting Sarah Kane. The mirror cracks, and becomes shards of glass. Each shard reflects a part of Sarah Kane, and speaks. The shards are autonomous, yet not. They seek freedom, yet unity. I see myself as one of those shards.

Translation:
As I had a similar experience with depression, it's easy for me to bring myself into the perspective of the protagonist. I feel this text is the final thought, the final crying of s/he.

4. Was there any difficult experiences to look within yourself while working with the script or with your director? How did you navigate that? And where do you wish to move towards?

Kyongsu: Andy (director) expressed that he wanted us to speak in our mother tongue. The concept of mother tongue has always been elusive to me. I am Korean Chinese mixed, but my passport states that I am Korean. At home, I speak Chinese with my half Korean mother, and Korean with my Taiwanese Chinese father. And despite being fully Asian, I speak English most fluently. So what is my mother tongue?

My actor training has been predominantly in English, and I’ve acted mostly in English. Yet, I have been told that my energy or presence changes when I act and speak in Korean. More… authentic. What does that mean?

I think I came to ITI in search of answers to these questions. I wanted to embrace complexities, and test the bounds of human expression and interaction. And this production’s multilingual approach has given me the opportunity to do exactly that. We’re taking the consciousness of Sarah Kane in her last moments, and unpacking it in four different languages. How the audience receives it… I hope to find out.

Translation:
The difficult part for me is how to keep a distance between the character and myself. Like I mentioned earlier, I put myself in the script easily because I had a similar experience. However, it became a situation where I indulged in my own memories. It became "I" was in the play, instead of the "character".

How did I solve this problem? My counsellor had an interesting suggestion, he advised that I could use 100% of my experience and memory in the first practice. I could cry, feel angry, feel pain. Then after that, think about what happened in 5 minutes and to analyse the reason why I cried and felt pain, until I could reasonably see and understand the situation I went through. After I've cleaned and arranged my mind, in the later practices, even if I had brought my previous experiences, I can separate myself from the character slowly.

At the end of the interview, Aki hopes that audience would realise that everyone can have a dark and weak side, but we can face it and accept it. She also wants the audience to know that persons with depression or suicidal tendencies are not crazy or weak – they want to live – but they’ll need a lot of help and a hug. Kyongsu ends on a powerful note, hoping the audience would see/feel their sincerity.

Read Part 1 of the interview!