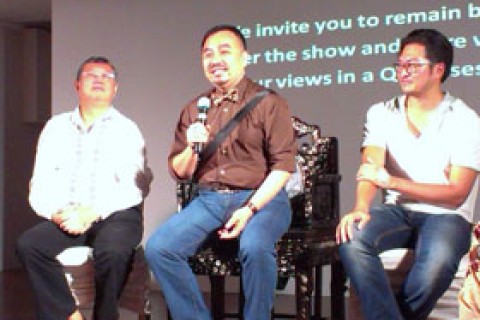 In the trend of appeal for identity seeking/definition, the Peranakan culture is certainly one of the major components. The historical and geographical aspects of Singapore that contributed to the uniqueness of this society also brought about the formation of the Peranakan culture. Even though the possession of this culture is predominantly shared with the other two cities of our neighbour – Malacca and Penang, it is a unique piece of creation originally brewed within the three societies respectively.

The Chair was Desmond Sim’s critique of the biased emphasis of Peranakan antiques and heritage towards monetary values when he created this script eight years ago. The dramatized reading of the script on this evening was presented in a more complete fashion. Yes, including the fashion, the presentation took care of the details to a certain extent that it was more than what we perceived of a dramatized reading. In The Chair, the chair was constantly at the centre of the stage, serving as the major link of events that happened at different places and times. As time went by, the role of the chair diminished (into the store room) and… (I’d like to let you watch the ending to be presented on stage in next February or March.)

I’d say the concept is an optimistic view of the development of the culture in the past and future, although there are unsatisfactory and disappointing snippets along the way. The non-Peranakan and younger members in the cast have been enlightened by the dedication of Sim and other Peranakan members in the team and the fascinating stories that had happened within and shaped the culture. The Chair not only emphasizes on remembering the past, but also stresses on new creation and further development of the culture to continue moulding the identity. And, to me, although I’m not a Peranakan, I feel this special blend of the refinement and exquisiteness of Malay and Chinese cultural elements is something that will continue to impress and inspire generations to come.