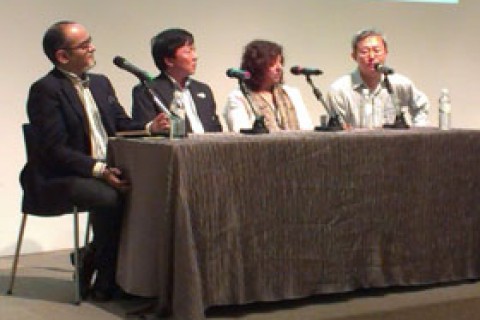 I chose to deviate from my original plan and selected this session as I was still kind of in the process of concretising the concepts of a Singapore identity or culture. Although the discussions didn’t yield a scientific definition of the term ‘Singapore literature’, the dramatic lineup of panelists had pointed out some directional leads to a better understanding on issues of identity and culture.

A fact that looks trivial but still deserves a thought was shared by Koh: we are just seven years away from the 200th anniversary of the founding of modern Singapore. He reminded everyone that the history of the society we live in is actually not too short as many had perceived, and urged us to be confident in possessing and practicing our own culture, even in the midst of influx of foreign cultures to the society.

As an immigrant herself, Chand saw great sources of stories within the society that was formed by immigrants since its founding. Leaving their home countries of different cultural backgrounds for various reasons (many were painful ones), immigrants came to this small island, struggled, survived and built their homes. Chand saw these as great stories of survival that the society, especially the younger generations, should feel proud of.

When asked by the moderator Huzir Sulaiman that whether we were looking back too often and not looking forward, Koh explained that a balance of the past and future is ideal but artists in Singapore are facing ‘resource shortage’ in looking forward and at the same time preserving the past that is being wiped out too fast. In order to look to the future one has to keep the past stable and sound. I guess in this respect writer’s ability to ‘slow time down’, as what Boey believed in, is useful in helping the society to maintain a certain speed of progress in order to recollect enough memories and ponder the path into the future.

The society is still evolving. This is for sure. And the culture that is being shaped by the people in the society is evolving too. As I have been enlightened at the session, I feel it is important for the society to have a space to evolve. As this space is widening, it is time for the people to (re)gain self-consciousness, confidence and courage (3Cs?!) to either hammer or mould a cultural identity that we can be proud of.