[Review] The Abducted Justice in Accidental Death of an Anarchist 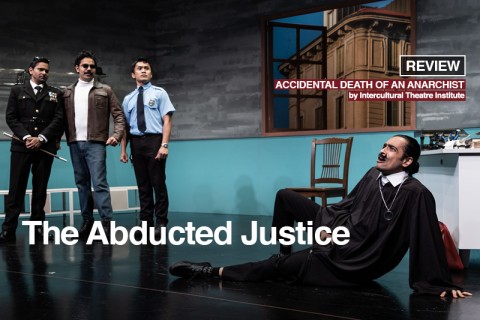 What we’ve caught before from Intercultural Theatre Institute (ITI)

We’ve caught several productions performed by each batch of ITI’s graduating students since 2017. This is the first farcical satire we encounter. My impression of the ones we’ve previously caught was that of solemn, dark, and sometimes, imposing. Nonetheless, all of the productions tend to be retrospective for a good reason, and some more introspective than others. Two of my favourites are the recent FIVE (the anomaly grad show presented digitally via Zoom, in between the undulating phases of COVID-19), and RevoLOOtion (a light-hearted but gruelling forum theatre on communal issues and oppression).

RevoLOOtion places audience in a tight spot to help the story’s protagonists (the oppressed and oppressors) get out of their current predicaments. The performers will simulate the audience’s choices and suggestions to enact possible outcomes if something is changed in the story. 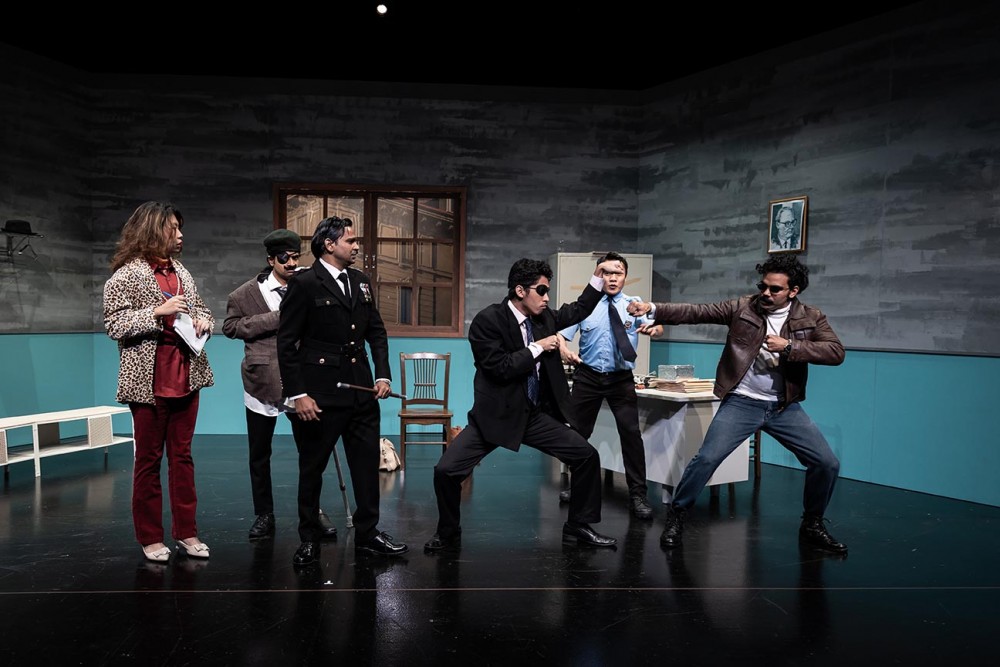 The false endings in Accidental Death of an Anarchist

In a similar slant, Accidental Death of an Anarchist ends by giving the audience a (pseudo) choice: to save oneself but risk being perceived as an accomplice to the anarchistic rebels, or to empathise with the corrupt police officers and save them from the bomb explosion. Accidental Death of an Anarchist is not a forum theatre; when performed according to the original script by Dario Fo, the audience will only see the outcome for the latter option being played out. The reporter in the story who decides to save the police officers, ends up being sacrificed.

Accidental Death of an Anarchist written by Dario Fo is centred around the meeting of a madman, a group of policemen, and a reporter. The convening of these three groups of people can be read as an analogy of the political confrontation that Fo wants to dramatize. The idea that Dario Fo wants to bring forth is iconoclastic, but the styles he adopts are inherited from early forms of professional theatre (commedia dell'arte) known as Italian comedy.

In the original incident that inspired Fo’s play, the truth behind the death of the anarchist that occurred during a sus police interrogation was concealed. The script fictionalises this ambiguity by assigning the madman (played by Kewal Kartik) to become the bearer of inquiry to expose the dirty laundry in the police institution. 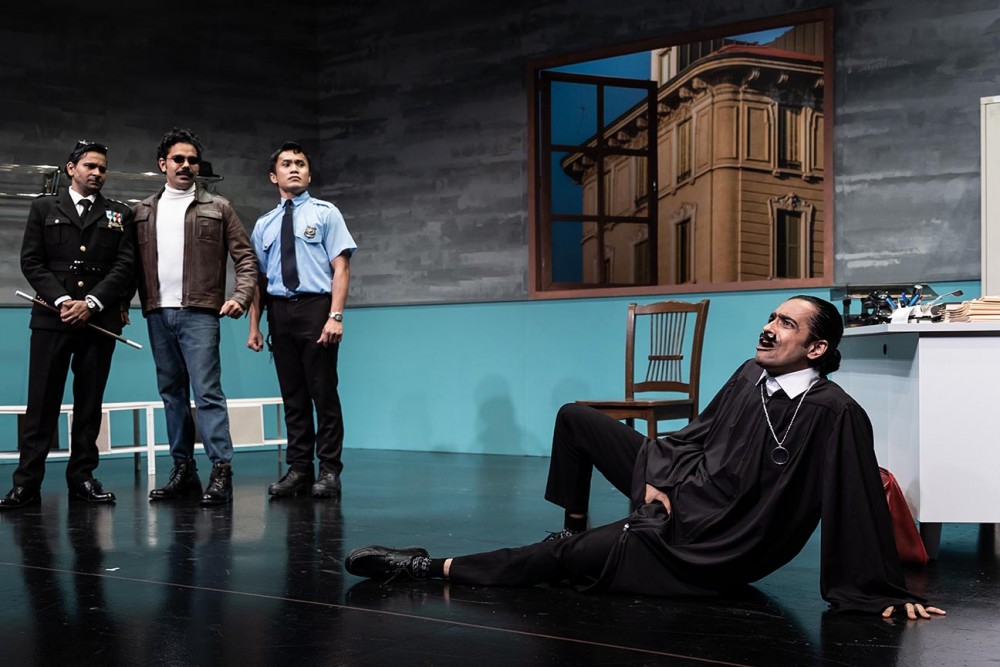 The madman’s identity symbolises statelessness and he is literally a “master of disguise”. It is his caricatured impersonation of several roles that enables him to confront false authority (police) and political romanticist (reporter). The reporter Miss Feletti (played by Lin Jiarui) symbolises benign justice, while the troupe of policemen could represent the pronounced hierarchy that exists in an authoritative institution, and their status as footmen or instrumental devices of the state.

The script cleverly contrasts two different approaches used by the only two characters who were after the “truth” in the story, to bring out the point that a benign reformist approach is clearly not enough to expose the truth behind a state cover-up.

Fo’s choice of having to use a ‘madman’ as the protagonist seems to signal that only the seemingly illogical (illogical to the mainstream) have a shot at overthrowing the status quo – that one needs to assume a state of statelessness or lawlessness in order to unmask the corrupt. This also reinforces his advocacy for the anarchist group, whose unfair treatment and death led to the writing for this play.

The abducted justice in Accidental Death of an Anarchist

While Kewal does an entertaining barrage of caricatures demanded by his character, Jiarui does a refreshing take on the reporter, Miss Feletti – the visiting reformist journalist, punching the high notes into the brawny episode. He plays the impeccably-dressed Miss Feletti in drag, which was a spirited interruption to the on-going masculine raucous racket to drive the plot forward in the exposé (although more time could have been given for him to develop the role of Miss Feletti). Miss Feletti is said to be inspired by journalist Camilla Cederna, who was known to be an assertive, aggressive, high society rebel, appearing at court hearings in jeans at the age of 60 in the 1970s.

Nevertheless, Jiarui brings with him an air of intellect, an astuteness to uncover the truth behind the perceived injustice, yet remains gullible to an extent, distracted by the madman’s words. His character Miss Feletti deviates from her original path of trajectory. This act signposts how intellects often get lost in the maze of flowery language and impractical theories, too much optimism and compassion, that they eventually lose sight of their initial aim and hence, lose the battle. 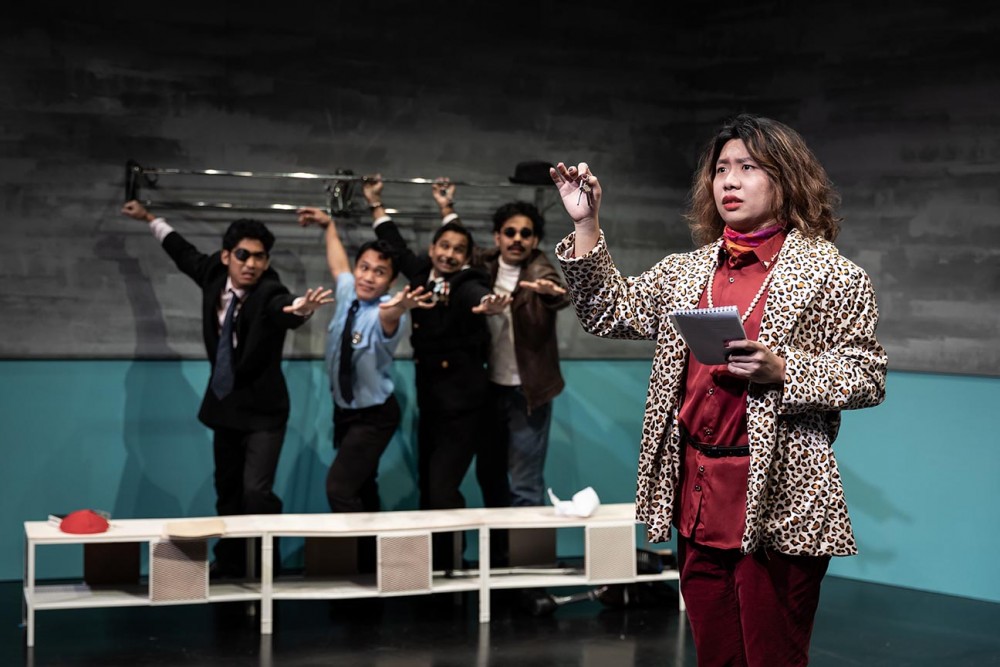 In the false ending, a bomb is about to go off; the reporter Miss Feletti is thrown the keys that will release the handcuffed, corrupted police officers. She is asked to pick a side – to leave the corrupt officers behind and thus becoming an accomplice to the anarchists, or to be compassionate and empathise with the police as being oppressed by the state.

To let them go, Miss Feletti signals patience and compassion for an optimistic improvement in the system of the state, adhering to her role as a reformist. The stand in Fo’s play (and the ITI’s loyal rendition) seems to be that Miss Feletti would have to choose anarchy over compassion if she wanted to live. If she chose the latter, fulfilling her role as a compassionate reformist, the lackeys of the state go scot-free while she will have to die, along with justice.

Justice is seen abducted twice in this play. First, assigning a madman to expose the truth behind this state masquerade does not address the need for justice. The lawlessness character of the madman is more like a convenient deus ex machina for the playwright to air his rants. Second, the introduction of media (Miss Feletti) would have been a good opportunity to discuss how justice was denied or could have been served. But Miss Feletti’s character is often misled and silenced by the madman, abducting her of a chance to redress justice.

In the true political incident that inspired this play, justice was indeed abducted from the wronged victims. However, in Fo’s play, little mental space was given to allow audiences to mull over the intricacies that contributed to the case, its consequences or simply small acts of kindness that could have alleviated the societal tension prevailing then. Perhaps, Fo has wittily mirrored the injustice and exposed the scandal in his play, but it serves more like a political rant than a reflective catalyst when he continues to perpetuate the abducted justice in his play. Perhaps, I’d love to have seen a modern iteration that could push it further than simply re-enacting the futility and helplessness of the incident. 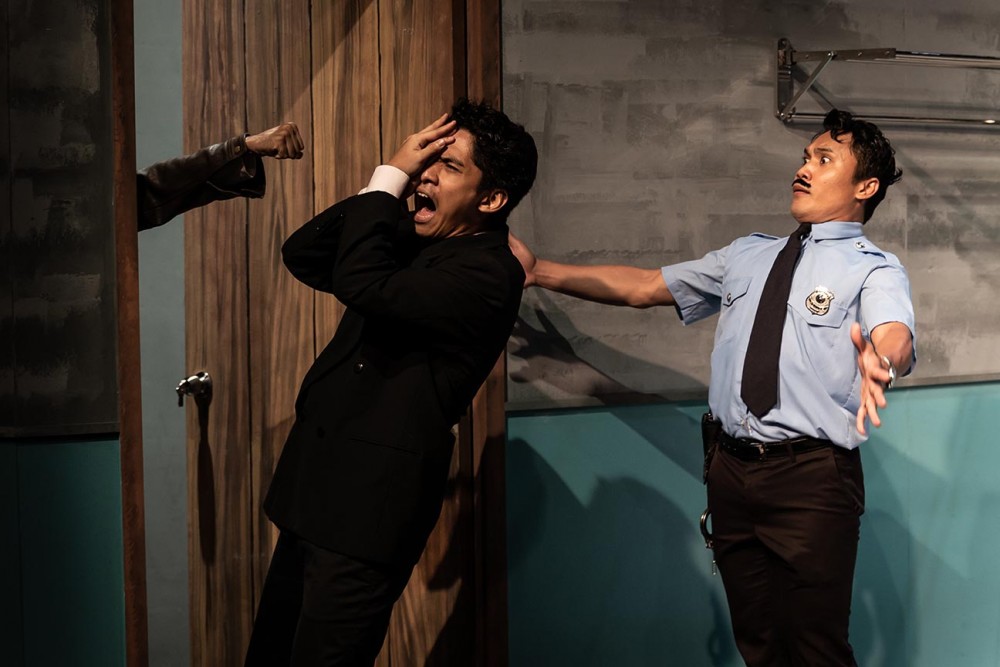 Accidental Death of an Anarchist (Emery)