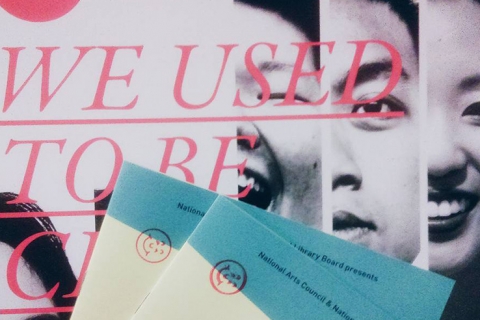 The Young Adults novels in Yishun Library jumpstarted my love for fiction. I very quickly moved on to discover the enchanting philosophy of Paulo Coelho. But as the magic wane off, I threw myself into the surreal world of Murakami. The library has been an incubator for my literary exploration. Falling in love with local writers and their writings in recent years seems to signal an innate and pressing need to recalibrate myself, to anchor myself in the real world. So, I was excited to learn about a double bill happening in the Woodlands library. Not one, but two plays, penned by two young playwrights being performed in the heartlands! Will anyone come to watch?

In Counting, Farah (Shafiqah Efandi) and Laila (Nessa Anwar) bump into each other on Orchard Road years after an abrupt separation. Their spontaneous encounter triggers a Pandora box of reminiscences. They talk about the intimacy and innocence of their friendship, which blossoms into a romantic kind. Their relationship is, however, kept largely under wraps due to the social stigma of homosexuality. Not long after, their growing discrepancy in societal views and religious beliefs become an elephant in the room, wedged between them. Their ambiguous relationship ended, following a heated argument on the most trivial of things. The play unfolds as the protagonists literally unfold pieces of fabric to sit on. Each piece sets the ‘space-time’ context as they recollect episodes of their past.

Understandably, Counting employs dialogues and recounts to relate these issues to the audience. These are the most straight-forward forms of storytelling, but they are also monotonous. Perhaps, the work functions as an outlet of expression to relief the playwright herself. (I hope it did.) But the play is simply jam-packed with too many issues that we have no time to digest, and the direct narrative form makes little impact on the audience.

In Holidays, Eleanor (Zee Wong) returns home for the holidays, with the words ‘Endless Summer’ splashed across the front of her T-shirt. What follows is a chain of events one would expect to really happen in real life when a friend returns home for summer break: eat, complain about being objectified by relatives, confess about a break-up, attend a peer’s wedding. A dismal note hangs in the air for the entire length of the play. Except, when Eleanor’s artsy friend, RJ (Deonn Yang) chows her way through a $2 McChicken burger on stage. The play empathises with youths and their growing-up phase, but fails to shed new light on issues faced.

On the other hand, I have seen Zee Wong perform in Upstream (从头开始) – another play that deals with the protagonist’s upstream battles and struggles to return home. But I would take the latter over the former anytime. Both depict a situation of self-loathing and confessions, but Upstream leaves the audience with much more room for emotions to brew than Holidays.

Jean Tay shared at SWF’s Words-Go-Round: “But plays are not about theories. The best plays are about people.”

Yes, Sabrina’s Counting and Euginia’s Holidays are, essentially, plays about people. People and their relationships. Their changing priorities, and how they deal with it. But the double bill is akin to a teenager’s confession – a little too honest, a little too ambitious. Each play deals with too much emotion and too many issues in 30 minutes. It is as though this play is stuck in the Young Adults fiction section of the library.

I am sure both playwrights have a lot of things to say. I look forward to them making plays about people the best plays.