[Review] The Death of Einstein and the Director in the Carpark

18 Mar 2018
Article by Sam Kee
Photos by Tuckys Photography, Courtesy of Esplanade – Theatres on the Bay 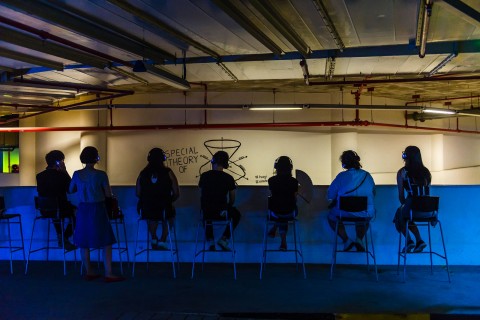 If you could not find what you were looking for in Cut Kafka, you can find some of Kafka's absurdity and darkness here. The carpark, a temporary space in passing, could be likened to a limbo state constructed by your raw unconsciousness to deposit some of your darkest secrets (cue Inception). Underground, an imposing ceiling, windowless and exposed pipeworks renders the carpark stifling. It makes one wonders why such an indispensable facility is designed like an introvert. The carpark comes to represent an oppressive and intangible system to whom may come. By participating in this bizarre situation, you might have unwittingly become one of Kafka's protagonists. 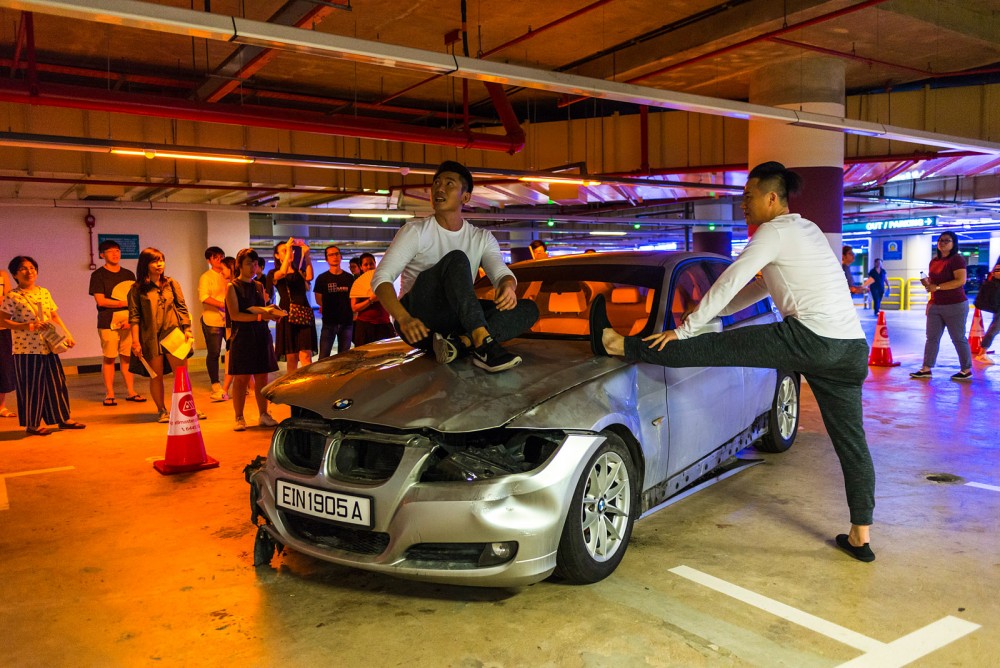 On the surface, it looks as if this performance-installation is trying to string together relativity and traditions. Let’s talk about time in relativity first. Take for example the stars in the sky: We are always staring into the past of these stars; we never know how they actually look like right now. The stars may no longer exist as you look at them twinkle from where you stand. From your position relative to the space where these stars exist, there seems to be a bend in space-time dimension — we suddenly have the ability to go back in time, to witness something's past. Have we then travelled back in time? Regardless, it is significant that we are present to witness a moment in the passage of time.

Fit this idea onto the artwork: Could we look at a vehicle in the present and see a moment in the past or the future? Can we look at the traditional art form of Kun opera, where Zhang Jun is the vessel or the time capsule, and see the origin of Kun opera, or its future? Can we plot George Chan in the same time span as Zhang Jun and see where the two universes meet, intersect or interfere with each other? 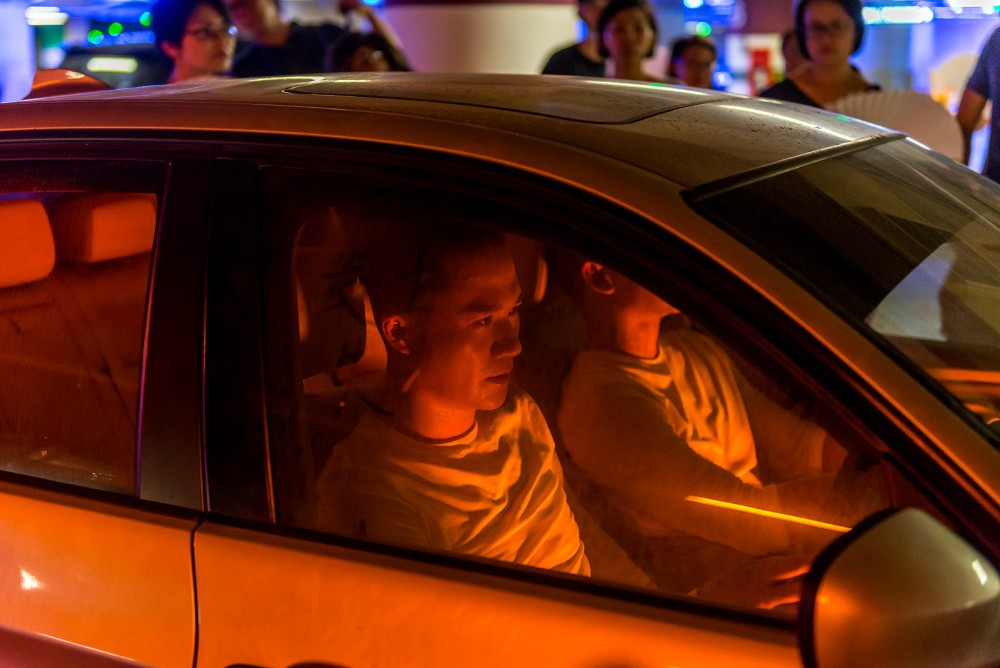 Like two heavyweight heavenly bodies, their masses give way to attractive gravitational forces that tugs at each other, causing them to keep apart and be pulled towards each other at the same time — like how two cultures would interact in the presence of man and time.

Director Liu Xiaoyi continues his foray into avant-garde expressions of the stage, hoping to bend the time-space between us and a culture that exists 600 years ago, and between the art of modern Western musical and the traditional art of Kun opera. He continues to explore and experiment with the collision between cultures, and the relationship between artists and onlookers. 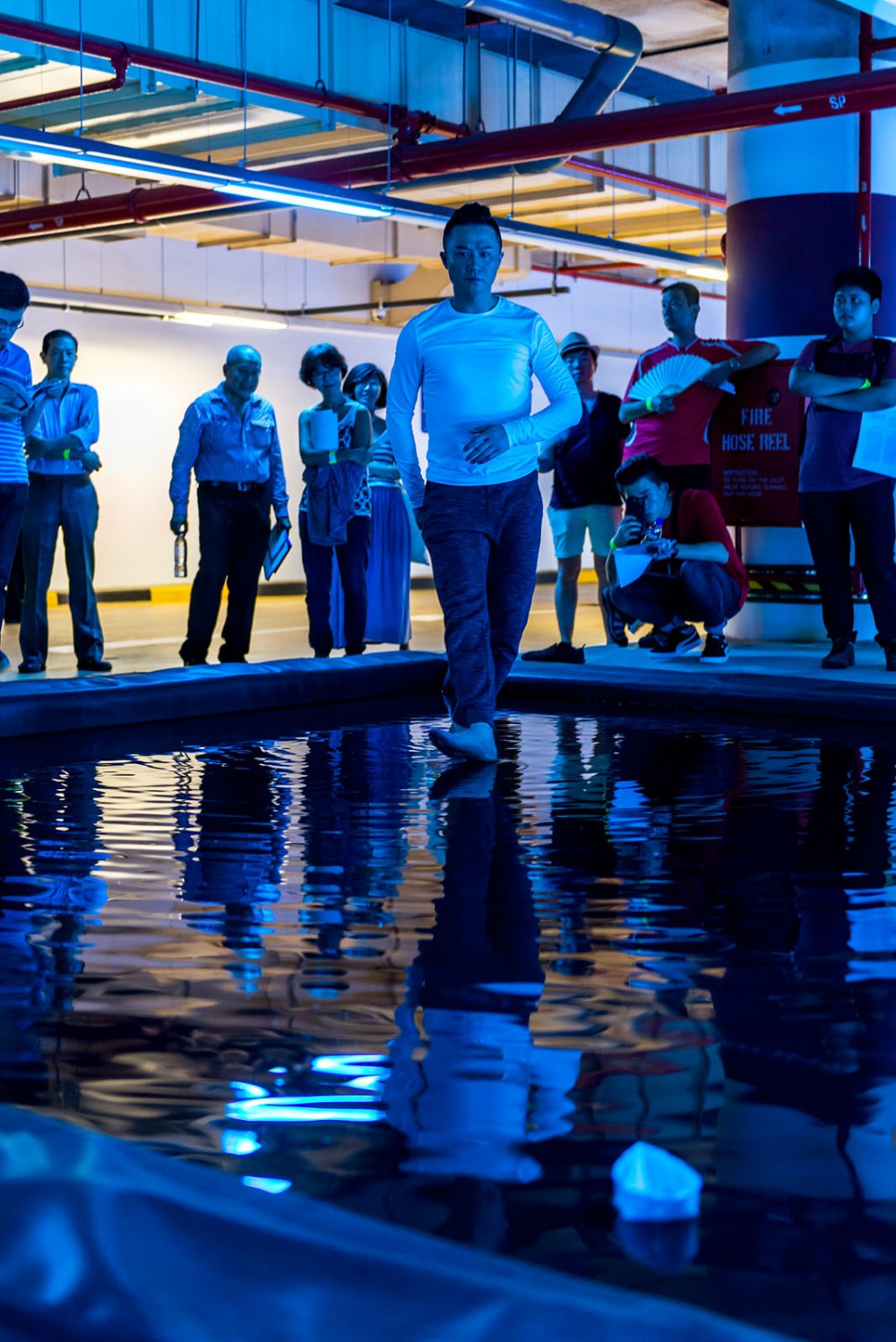 Underlying these facets, Einstein in the Carpark is also very much about the death of the creator, since Liu claims that all these symbols are meaningless to him. He has merely synthesised and arranged a series of events. Participants are forced to make their own narratives, to make meanings out of the limited and carefully curated installations. And their responses seem to be what Liu is after. (But I really shouldn’t be making conjectures about what he is after.)

In The Death of the Author, Roland Barthes rejects the idea of an author’s intention, and pushes for a reader-response criticism in the 20th century:

“The reader is the space on which all the quotations that make up a writing are inscribed without any of them being lost; a text’s unity lies not in its origin but in its destination.”

Loosely interpreted, the creator’s intent can never be absolutely known by the audience. But the audience’s impression of the creator’s intent is a voracious engagement with the artwork itself, unto which meanings could be mapped and mined. Especially in this case, the installations and short bursts of performances make no sense on their own, unless the audience actively project their understanding onto the installations and make meanings independently. Then, the collection of these meaning-making would form the text, that Barthes asserts, is “drawn from many cultures and enters into mutual relations of dialogues", rather than from one, individual experience. 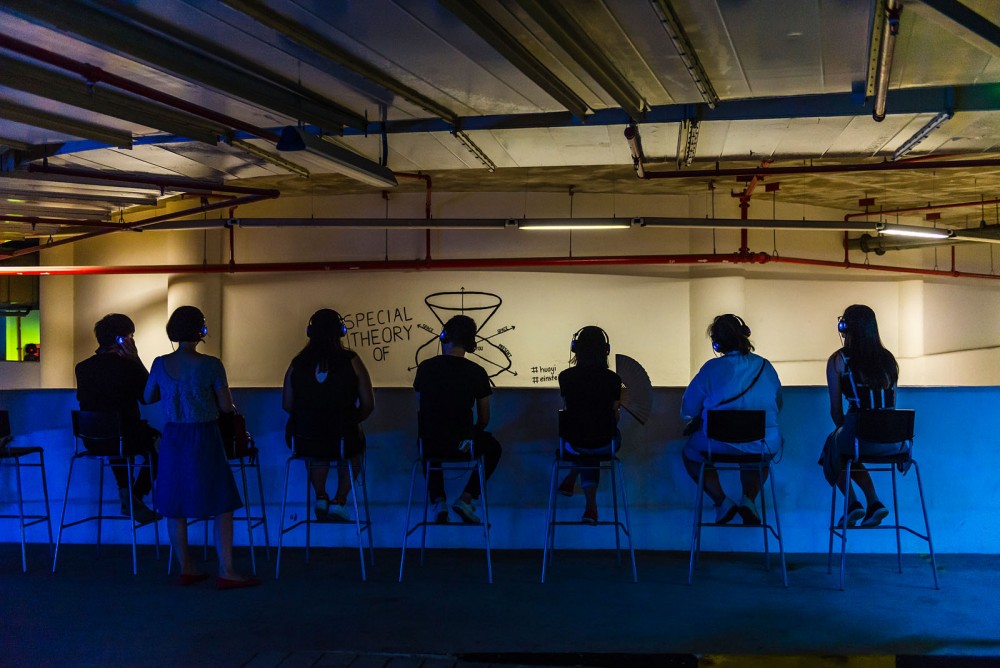 The text becomes part of the performance and you have unwittingly co-authored the play. Maybe this is also why Emergency Stairs has been conscientiously collecting and translating responses to their shows since their inception.

I will end with my favourite bit of the show: Standing opposite the past-present-future-funnel-of-time graffiti, headphones on my head like a pit crew, with Liu narrating in my ears about unrequited love. If light could bend round that curved wall of the spiral carpark ramp (like gravitational lensing scientists use to look behind blackholes), one would be able to catch a glimpse of the near future — whether or not a car is going to come crashing your way.