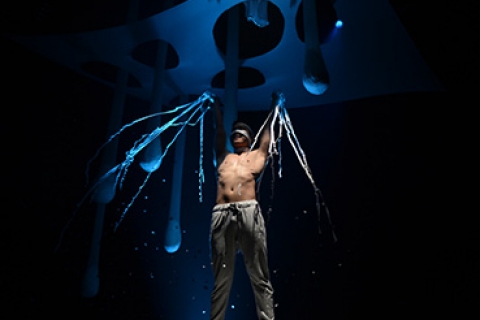 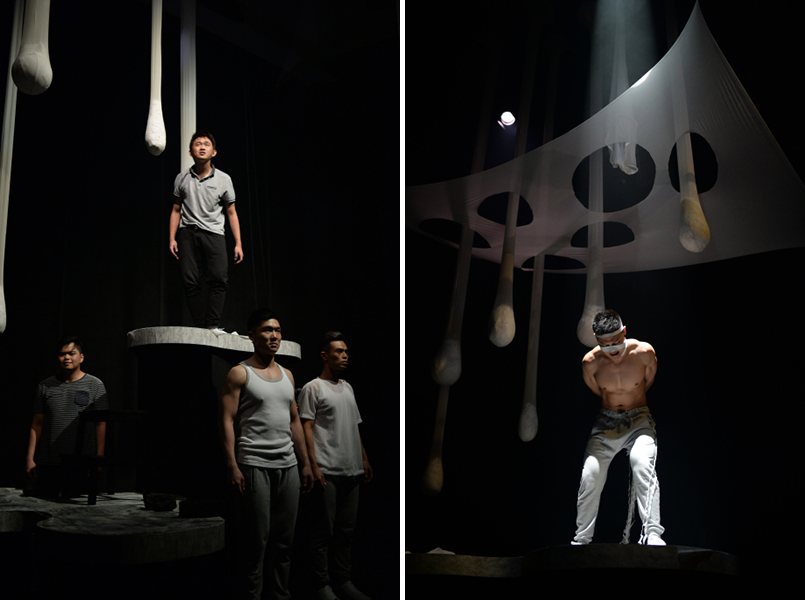 Shar Pi’ee, co-writer for GRIND, facilitates our entry to the Blackbox via the backdoor. (Someone chuckles.) We pass a few graffitied debris on the way to the Blackbox. But, unfortunately, we do not have time to dwell on these static installations, and none were too conspicuous. We enter a dark enclave, not looking unlike an underground cult. Topless dudes perch atop pillar-like platforms, repeatedly chanting scripted lines.

The set, designed by Chris Chua, appropriates an uneasy air. What looked like stalactites at first glance, turns out to be giant milky-white globules. These viscous drops of semen-like residue suspend in mid-air, evoking a post-sex pensiveness. They cluster above the respective platforms, drawing attention to the four protagonists. There seems to exist an interesting power play between the audience and the protagonists. The boys look like prized trophies placed on pedestals to be gazed at by us. On the other hand, the audience stands awkwardly throughout the show, not knowing where to place our hands. And at all times, forced to look up at the boys (although technically, we are free to move about on the floor). I cannot quite decide who has the upper hand.

In contrast to the intimidating set, the monologues are easy to swallow. The four performers take turns to confess their life issues. Surprisingly, these issues are not at all unique to the LGBT circle. Although the play is touted as a ‘contemporary gay play’, most of the issues discussed are rather universal: yearn for a blessing from a beloved sibling that may never arrive; physical insecurity coupled with an unhealthy obsession with the social media; tormenting conflict between religion and self-identity.

Perhaps, this is how the playwright wants us to think about the concept of prejudice. On hindsight, I may have entered the theatre space holding certain ‘prejudices’ about the gay community, resulting in false expectations of a ‘gay issue’. The play seems to be trying to close the gap between ‘them’ and ‘us’. Ultimately, we are all dealing with the humanistic struggle with love, identity and bullying. We are not so much different after all.

Of course, the play does raise some agonising issues unique to the gay predicament, such as the denial of government housing, adoption of children, differential treatment in the army. But mostly, these controversial issues stem from fighting against the ‘system’. The play does not – and is unable to – shed new light on these issues. But there is progress.

A pseudo-Pink Dot party rounds up the play at the end, signalling that the activist protagonist, Long, has succeeded in his pursuit. It is also interesting to note that this event is approved by the same ‘system’ that denied the above privileges. The protagonists finally came down from their stands, to be on the same ground as the audience, reconciling the disparity of power in the theatre space. Then, they disappear into the crowd, silently declaring that we are now on equal footing. Are we..?

What I also see is an attempt to establish the root of the gay identity. At one point, the playwright inserts biblical references to the word ‘sodomy’, alluding to the impenitent sins that wrecked the cities of Sodom and Gomorrah. There is also a short history of the ‘gay scene’ in Singapore being told. And the only protagonist who gives in to the struggle with faith, and ultimately himself, dies. The play seems to suggest there is no compromise in the eyes of god. But dig deeper, it is he who cannot accept his own identity.

My only gripe, which amounted to my disappointment for the show, is the pre-show pep-talk. The facilitator preempted us to expect much crudeness, vulgarity or nudity. But for the most part, GRIND is simply a very serious (emo) show, with one exception of a split-second nudity. And I have already forgotten why he needed to get naked.