[Review] FLUID: The role reversal of the theatre and the audience 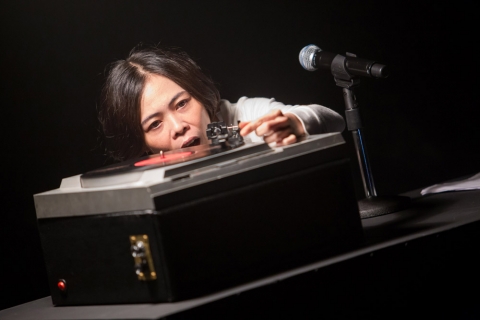 Having experienced a few of Liu Xiaoyi’s plays*, I did not bring any expectations into the theatre. His experimental plays were almost always completely unimaginable, even after diligently reading their synopses and his interview articles.

FLUID (Chinese title: 水往上流) is said to be an exploration of the definition of theatre and its meaning, specifically how it matters to the director himself. Would there be a naked cashier standing on the stage later? Would it be a wordless or voiceless play? We entered the black box. Little did we know, we have already unknowingly stepped onto the theatre space.

The stage was diagonally segregated into two: one demarcated by a mass of transparent trash bags, the other sat an ensemble of table, lamp, record player and microphone. Despite such a seemingly cold and rigid set-up, I felt at home, somehow assured that whatever that may come will surely bring us warmth. 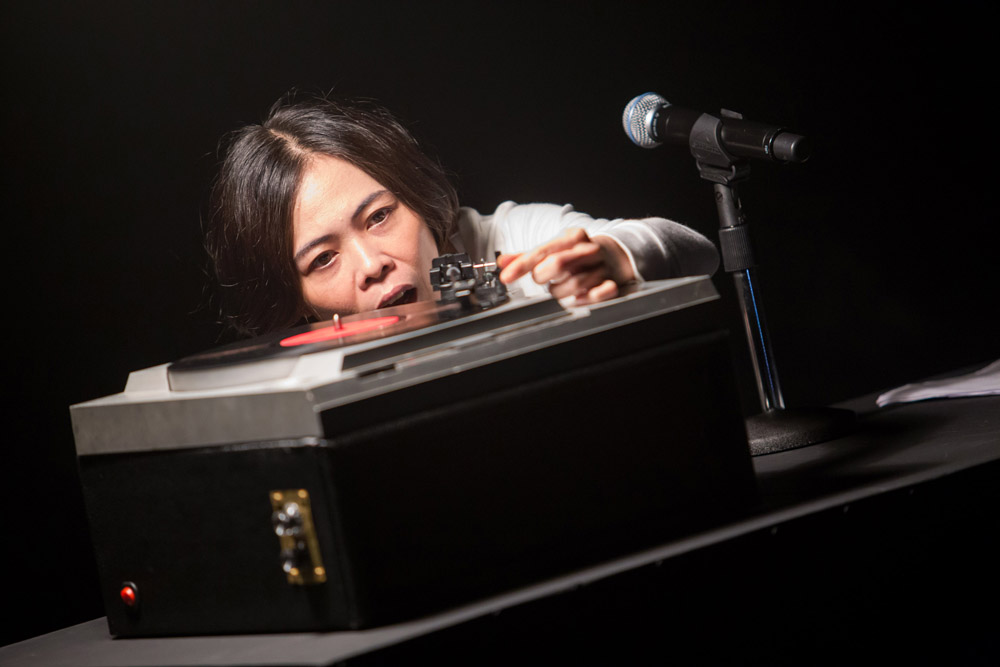 Li Xie sauntered into the theatre, the same way we did, from behind the heavy black curtains in total darkness. She found the lamp and switched it on, beginning the play. The light projected onto the main lead of tonight’s show: the record player. She cautiously placed the needle onto the vinyl.

The vinyl spun, spinning a seemingly Murakami-esque tale, discretely making references to what I believe are intimate experiences of Liu himself. I’ve never seen a more beautiful storytelling approach that converges both classic and contemporary storytelling. The axle driving the show is the narration done by the vinyl player, sometimes broken. Li puppets it, yet, she has her own story to tell – sometimes reflecting the story – seamlessly stitched with her theatre specialty – forum theatre. Simultaneously, dancer Lim Chin Huat expresses moods and emotions parallel to the narration with his bodily movements amidst the rustling heap of plastic bags.

All at once, our five senses and emotions were engaged. Although the narration was droning on passively in the background, we were all ears. Kept on the edge of our seats, we wanted to know if the fictional character (Old Wang) will concede to his teacher’s request to strip himself bare beneath the gaze of others; we wanted to know under what circumstances would he give up shame, rationales and his masquerade to give in to arts. Is this arts? 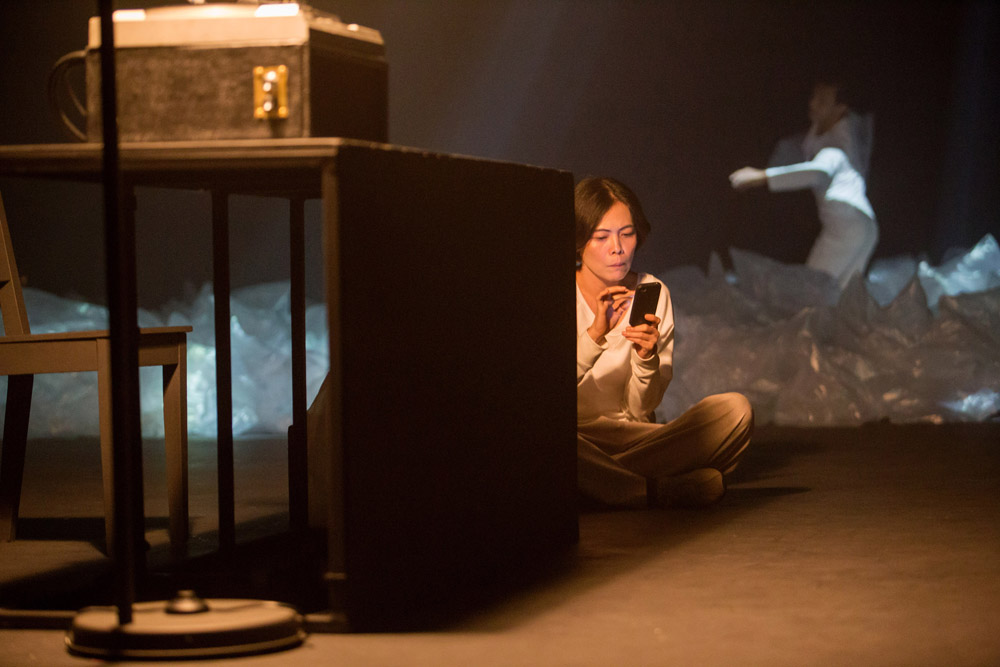 At one point, Lim stepped into Li’s real world and she dived into his. Both found freedom in different sense: Lim a microphone, and Li a forgotten dream. Eventually, they had to return to their rightful roles. The vinyl ended, and the theatre darkened. Li switched off the lamp, threw one last look and decided to run back to the table to deliver an optimistic ending to the tale. She wrapped up the story of Old Wang with him recalling the warmth and happiness he felt when he first experienced arts. He was reminded of its innocence and why he came to the mountain in search for the arts in the first place. He chose to give in, at last. In the absence of others’ judgement, he took off his clothes and accomplished the act his teacher demanded of him.

Li left, disappearing behind the curtains. We were left in the darkness.

Suddenly, the curtain drew open, revealing the glass wall of the black box theatre; we sat naked, exposed, to the public. Instantaneously, the audience became the watched. Subconsciously, I was thinking, is this against our will?

The questions plaguing the director – regarding what theatre is, why a theatre needs audience, why actors need to be watched – were suddenly inflicted upon us, the vulnerably exposed. Still immersed in a puddle of questions, we saw Li, through the frame of the opened door, walking down the stairs in the far distance. As if she was Old Wang, arriving at the foot of the mountain. Then, Lim discovered his freedom and ran out, bringing the play to an end.

“In everyday life, ‘if’ is an evasion. In the theatre, ‘if’ is the truth. When we are persuaded to believe in this truth, then the theatre and life are one.” – Peter Brook on ‘The Immediate Theatre’ in his book, The Empty Space.

Today, we see director Liu Xiaoyi baring his soul to us, putting theatre and life as one. And he has done it beautifully. 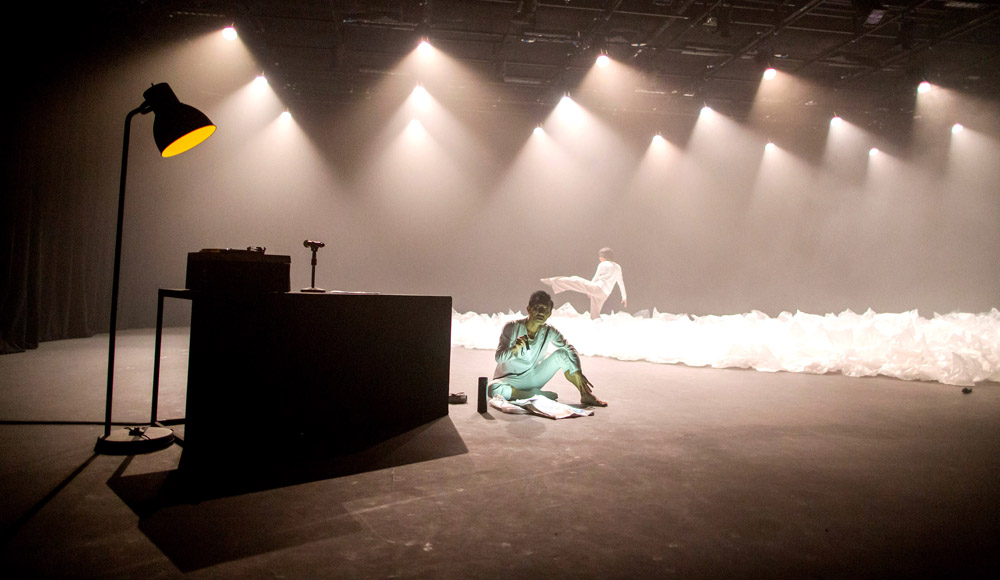 FLUID runs from 3 to 12 July at the Flexible Performance Space of LASALLE College of the Arts. More information:www.artsrepublic.sg/m1-chi-theatre-fest-fluid