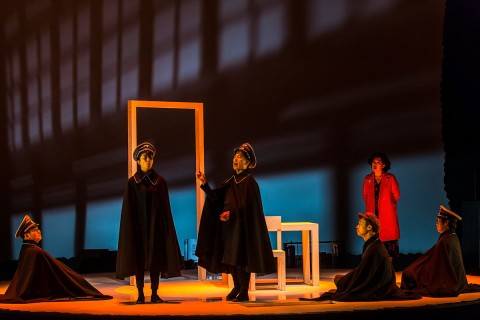 There are many common qualities between last week’s Citizen Dog and this week’s Framed, by Adolf: The static noises used to demarcate realms, the nakedness of the set, the use of a dim-witted character, the discourse on human nature and the idea of truth, realism and post-truth. I don’t think this is planned, but we don’t know how much influence one Chong has on the other along the way in the same company. Perhaps, the company’s rapport built up to some sort of mutual, common understanding. 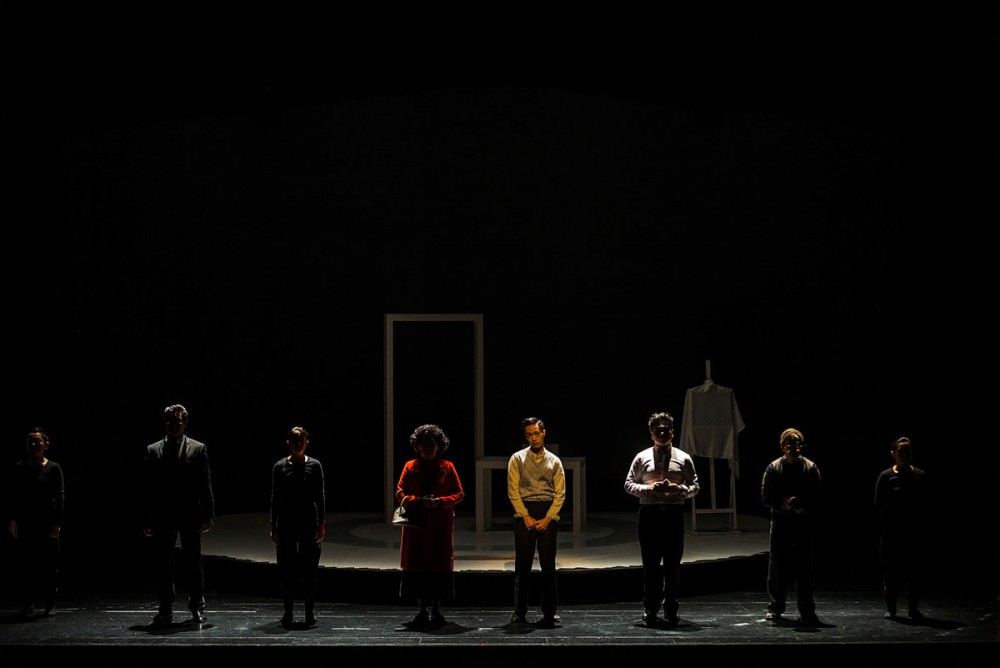 The story in Framed begins only when the names and roles of the characters in the story are projected on the surtitle board, introducing each actor in turn. The cast stands in a row facing the audience, on the front edge of the stage. They are each gifted an object by a crew. And at the cue of the static noises, they take turns to channel the role they are playing, much like someone tuning the knob of a radio in search of the sharpest, clearest channel.

Prior to that, the ‘prologue’ of the play already happened as the audience files into Victoria Theatre. We can see the actors ‘getting ready’ at the dressing tables on the wings of the stage: hairdressers, chit-chats, wigs and all. This display of a ‘transformation’ from actor to role is a device supporting director Chong Tze Chien’s choice to reveal the natural state of the actors as themselves to reconcile the use of their own ‘dialect’, a relatively neutral Singaporean English in a play assumed to be set in Germany. The display of ‘transformation’ alienates the audience enough to suspend disbelief and accentuates the implanting of the consciousness of the character into the performers’ bodies. (Very much like the consciousness-mapping scene in the intriguing Netflix sci-fi series, Travelers)

At the front of the stage, the curtain is descended slightly from the ceiling and from the left and right wings to border the stage, framing the stage, framing the field of vision of the audience. We are reminded that this play is also ‘framed’ by Chong. The story surrounding Hitler is told from his perspective and framed within the context that he is interested in and concerned with.

Frame, the word itself, has several meanings:

1. Bodily structure of a person
2. An arrangement of parts that gives a form or support to something as in the frame of a house
3. An enclosing border as in a picture of the series on a length of film
4. A case or structure for holding something like the frame around a photo
5. Particular state or mood as in to put something into context

Framed, by Adolf cleverly attempts to tackle the above definitions. The play reveals a ploy in parts. And within the play, a ruse is set up by rearranging fragments of truths to frame a context differently to different parties. 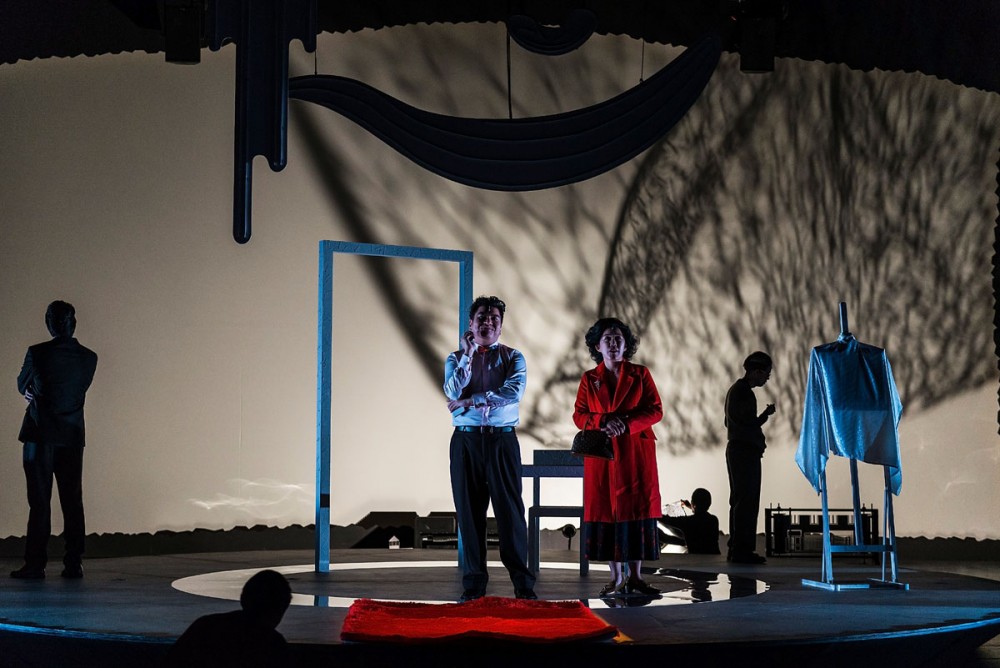 The duality nature of things is evident as a theme in the play. The protagonist Abdown/Anton (Joshua Lim) holds two identities; the seller of the painting (Serene Chen), who seems to be pandering to the auctioneer and the buyer, is actually plotting her revenge against them; the two roles Hitler plays being an artist and a politician at the same time; the two-faced buyer (Darius Tan) who markets underpaid labour as corporate social responsibility. Lastly, the most obvious motif: the double-sided canvas painting. In the play, Joshua as Abdown questions his gentile friend: Aren’t all gentiles Nazis? And near the end of the play, he exclaims in exasperation: Can’t a Jew be a Nazi?! Even when he strips naked at the end of the play, he is unable to prove his own innocence. 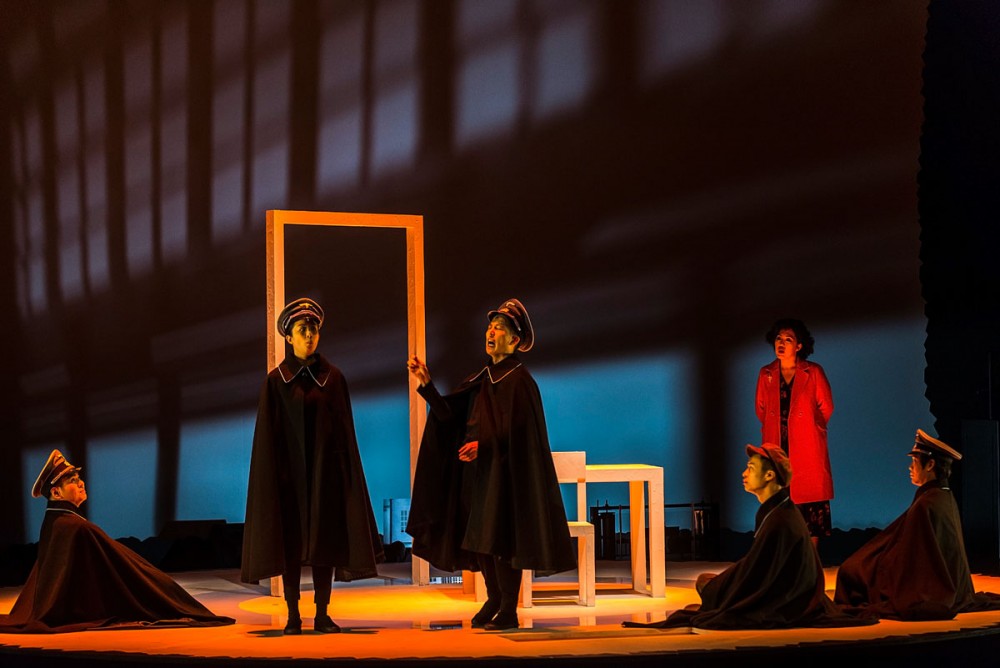 But the play is not so much about the binary nature of things. Rather, it is a discourse on the idea that both identities can sometimes exist coherently in one body. Most people tend to think that identities are mutually exclusive to each other. As a result, one is able to provide a skewed, incomplete truth of a person or phenomenon, and the reader finds it acceptable. That is how the seller (Serene Chen) manages to upstage the auctioneer and buyer in the ruse she set up. Instead of focusing on the qualities of the painting, the seller victimises her grandfather, Abdown, and presents the business deal as about restoring the innocence to her grandfather’s name, which is priceless. (Like the MasterCard advertisements.) The buyer (Darius Tan) himself asks the seller to present a ‘captivating’ story behind the painting, rather than talk about the qualities and history of the painting.

The seller passively manipulates their perceptions by weaving a story that aims to appeal to their emotions, rather than present a complete set of objective facts. With the buyer, she even attempted to use an emotional blackmail. 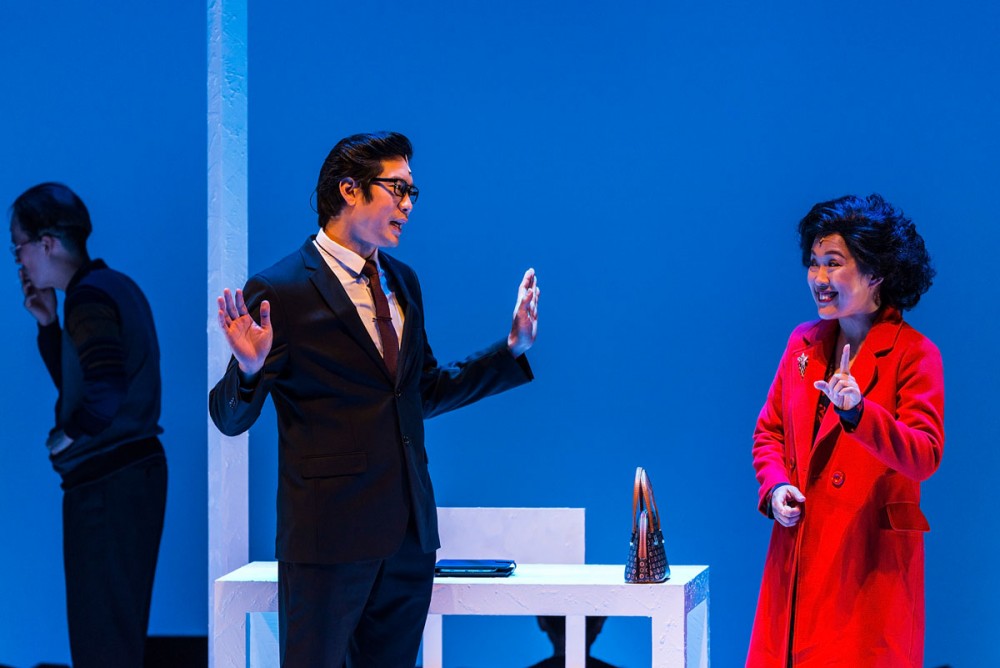 The entire ruse leads me to think about the concept of ‘post-truth’. In this post-truth age, where the algorithm of the internet, search engines and social media only reinforces your own preferences and the things you ‘liked’, trapping oneself in an echo chamber, facts become futile. In the age where facts no longer mattered and truth cannot be verified, we see people lose trust in institutions and disregarding experts’ opinions. In the play, the auctioneer could jolly well have averted the hoax by going straight to the professor to verify his opinions, but he did not. Although he did look up the story on the internet and aired his suspicions about the background of her grandfather, he eventually settles for empathy — empathy for the poor man who will never be able to clear his name of Nazism, because nobody can verify the truth behind his identity. Moreover, he overestimates his authority, thinking that he gains upper hand by recording the business conversation on CCTV as a sort of evidence against the seller. 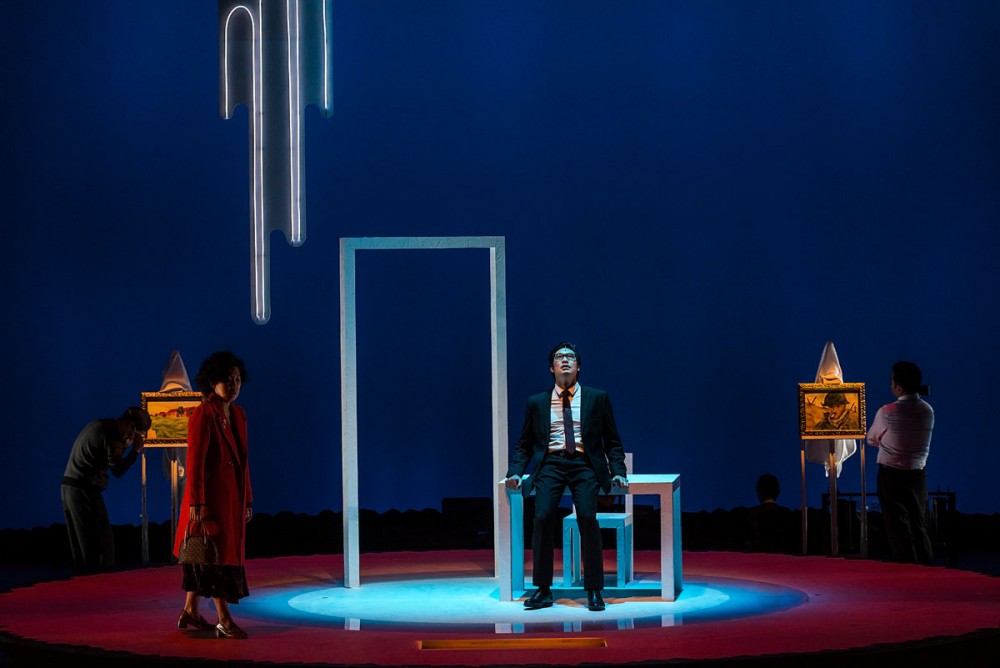 At the end of the play, we don’t even know which part of the seller’s story is true, or if the story exists at all! The person who manages the last laugh is not one who merely seduces or fools, but the one who can keep her composure while pulling strings to manipulate the course of events.

Framed, by Adolf is a clever ploy served like a dish of exquisitely wrapped sushi, on a white, circular, pristine platform. While appropriating truths, the play reveals controversies surrounding history, art, value, market, politics and truth itself. 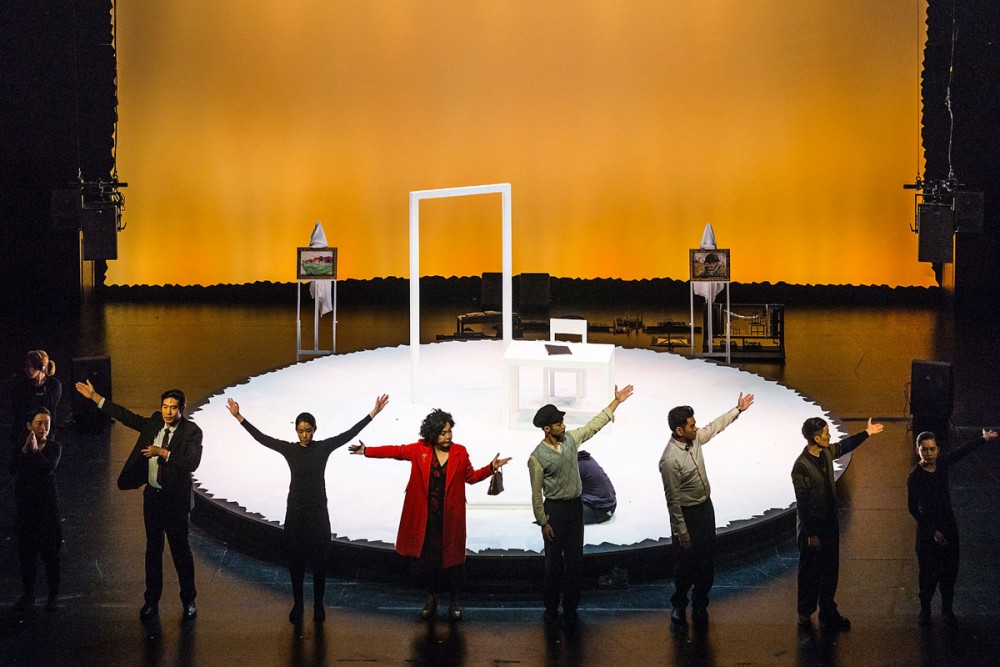