Organised by: The Finger Players

A seller peddles a great and undiscovered artwork allegedly painted by Adolf Hitler himself. The controversial but artistically groundbreaking work could potentially shock the art world and rewrite history. Behind this art work lies a greater and incredible story about the seller's Grandfather -a Jewish simpleton who was mistakenly tried as a Nazi war criminal for owning this Hitler painting.

Hoping to authenticate the work, raise its value and restore her grandfather's good name, the seller hawks this newly-discovered painting to a calculative billionaire, a cynical auctioneer, and a cautious professor.

However, none of them believe that her grandfather had bought the painting from Hitler himself, much less that he had concealed his true identity by adopting a new name and persona as a Aryan-German, and subsequently a Nazi soldier, just to prevent this great art work by Hitler from falling into the wrong hands.

As the auctioneer, professor and billionaire seek to uncover the truth behind the seller's story about her grandfather and his Hitler painting, a deeper truth about falsehoods, injustice and historical whitewashing emerges.

Framed, by Adolf promises to intrigue and stir your imagination, provoke and tickle your senses, and haunt your consciousness and conscience. 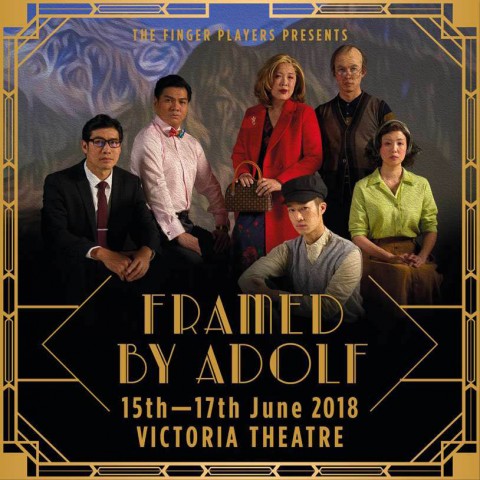