A response to the dramatised reading of Euginia Tan’s Habits 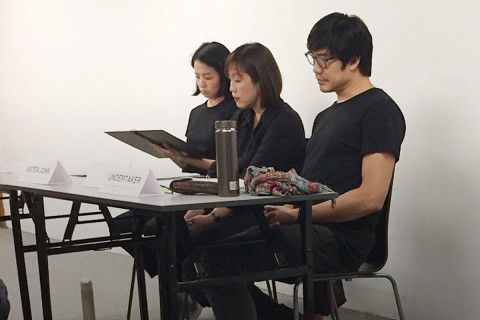 Previously titled The Man In The Coffin, Habits is a play that attempts to explore faith and kinship under the veil of religions, funerals and rituals. My first impression, though, is how strongly Euginia Tan comes through as a literary writer — her words seem to belong on the pages of a Maths Paper Press novel. But, reading the playscript are Zee Wong, Serene Chen and Tim Nga — they sound like they know the characters so well that the dramatised reading exceeded my expectation. 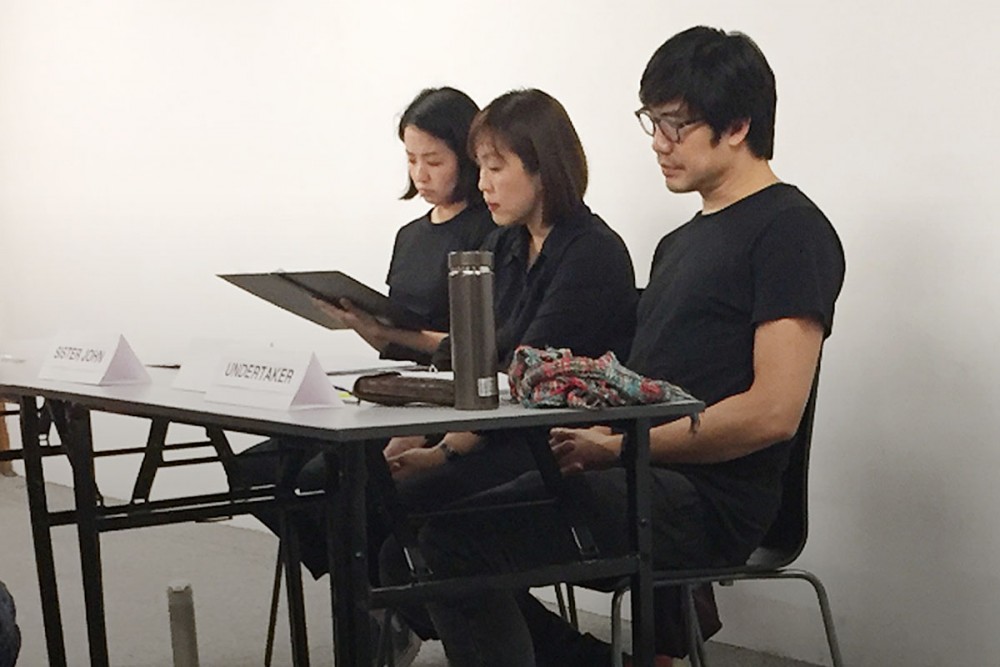 The play involves a Singaporean girl, Shih An, trying to get through the funeral arrangements and procedures for her father, together with her aunt who has been away for a long time in the US as a Catholic nun. In the midst of coping with an unfamiliar family member, logistics, angst and grief, Shih An has to deal with the absurdity of a mix-up in the dead body sent in place of her father’s. Hence, the titular man in the coffin.

First, it is clever to borrow the idea of a funeral, which is a ritualistic procedure itself, to scrutinise other rituals we do in the name of faith or religion, and through these rituals/practices/habits, discover the meaning of faith in religion, in people and in the form of love.

Then, we discover the playwright’s use of pun in the choice of the word ‘habit’. It could refer to the unhealthy drinking habit that the protagonist’s father acquired or it could refer to the religious cloak that the aunt wears as a Catholic nun. Either way, the playwright seems to signal that faith or religion is synonymous with habits: the way they can both be acquired or donned on; they can be practised or renounced; they could be healthy or unhealthy depending on your motives and the extent you rely on it. If followed blindly or ‘consumed’ inappropriately, then a religion or faith could be just as unhealthy as a drug addiction. This idea nicely pans out in the scene where the protagonist’s aunt decides to remove her gown/habit, an object that identifies her beliefs during the funeral processions one night to avoid people’s misappropriation of her role. The religious object does not define her and that the removal of an object of representation does not make her any lesser than she is. She does not become any less faithful nor uses it as an excuse to relinquish her duties.

The Catholic aunt character seems like a more nuanced character than the rest. Perhaps because this character stems from Euginia’s own experiences with her aunt living in the Home of the Little Sisters of the Poor. Euginia states in her interview with Centre 42, these women are “still very human and grapple with their individual relationships to the faith”.

Consequently, I have my reservations about the protagonist, Shih An, fitting into this theme. For example, what is her role in this? Is it just to passively receive? What is her ‘habit’? What is her back story about not wanting to face the other relatives? Is she just a product of an Oedipus complex — having lost her mother, having dealt with a drunk or perhaps abusive father, and now conveniently acquiring a motherly figure?

Personally, I enjoy the idea of ‘the man in the coffin’ more than ‘habits’. This unfinished sentence sounds like the perfect cliffhanger to have on the first page of a successful page turner. It urges the reader to read on to find out: Who is the man in the coffin? Why is he there? What’s his back story? Is he not the protagonist’s father? If so, then where is her father? If so, then who is the man in the coffin?! The coffin as a symbol also works to accentuate the idea of constrained spaces, alluding to the lack of space and freedom the protagonist faces when her alcoholic father was still alive. During the post-reading, the performers themselves revealed a ‘deleted scene’ from an earlier version of the script they’ve read: the three oddballs of a character squeezed into the undertaker’s car in search of the body he’s lost. This claustrophobic scene would have aptly brought out the idea of the constrained space each individual has (in the society) and the struggles one has to make to get out of such an undesirable situation.

Somehow, the play needs to reconcile these two seemingly divergent topics so that one feeds off the other and resonate a stronger universal theme on humanity than just the exploration of kinship.

Our first encounter with Euginia's playwriting work was Holidays, staged as part of a double bill showcase, We Used To Be Close. Read our review of the double bill here.