You Can Reach The Sky - Interview with The Wanderlings

30 Nov 2018
Interview by Max Yam
Photos by The Wanderlings 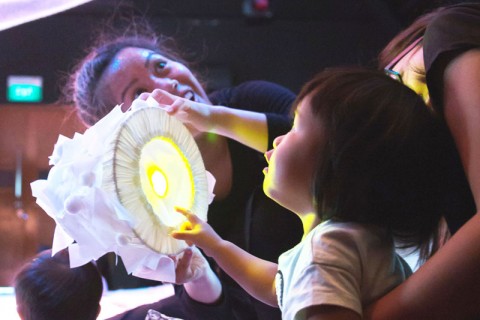 Singapore's first baby theatre production, You Can Reach The Sky, is back this December after a year of development and research. We spoke to Ellison Tan Yuyang and Myra Loke, the creators and founders of the company, The Wanderlings, about the inspiration and process of creating this unique, non-verbal and multi-sensorial theatrical experience for babies. 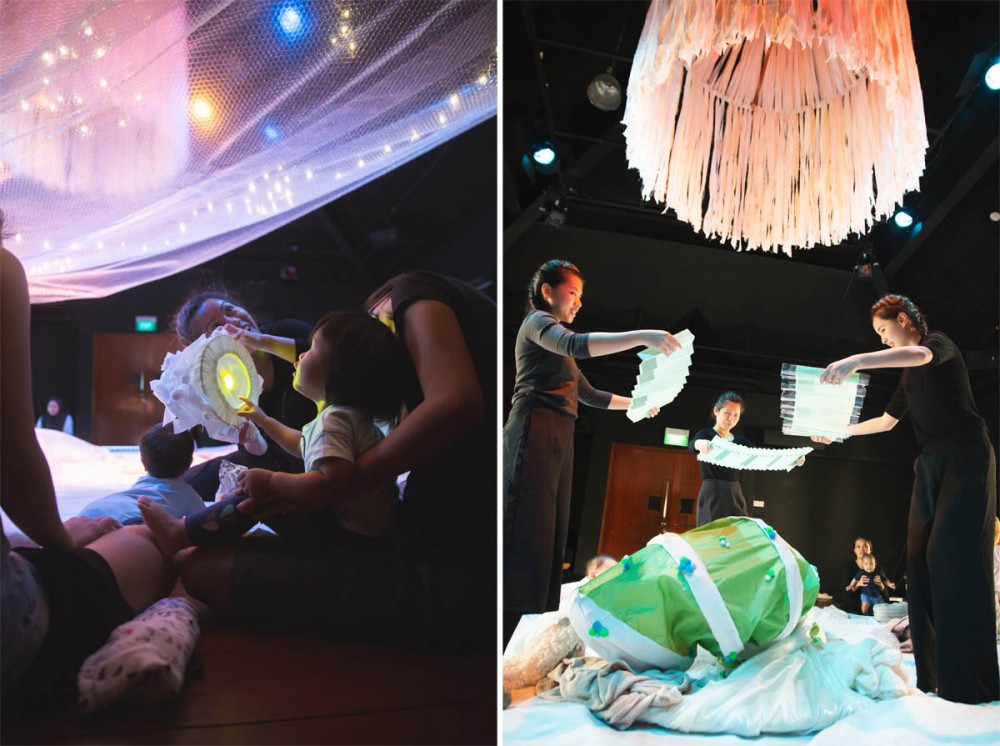 1. What motivated you to form The Wanderlings and stage Singapore’s first baby theatre production, You Can Reach The Sky? Are you inspired by a similar show elsewhere? Are you intrigued by interaction with babies? Share with us how you made the decision to initiate this.

Tan: Myra and I have been performing for young people in various productions for a couple of years, but the intended audience is mostly for children aged two years and above, that is to say, there aren't many offerings for children below the age of two. I think we both felt the gap, but didn't know how to address it. In 2015, I was accepted into a program in Tokyo called the Next Generation Program, organized by Assitej Japan. It is a program catered for artists who are interested in creating work specifically for young people - or Theatre for Young Audience (TYA). I got the chance to meet artists who have already started creating works for babies, and learnt about their motivations and processes behind the work. That is when my curiosity began.

The show is very much inspired by my family. My mum is a firm believer in engaging babies without technology. She would use anything you could find in the house - clothes pegs, mama lemon bottles, bedsheets etc to play with my nephew. This engagement is always very two-way - both parties are engaged and invested. Whereas in the case of an iPad for example, it's essentially very passive interaction. An image that got stuck with me during this [toddler] play is my nephew giggling and reaching out for a bedsheet that my mum flew over his head. His neck wasn't strong yet, but he kept reaching out and giggling, and that moment contained so much concentrated hope and happiness. My sister is also a new mother, and I feel there is a lot of anxiety on her end, taking on such a massive, new role. So the starting point, really, is to create a piece where babies can be engaged, and mummies can feel safe, and both parties would feel infinite.

Loke: You Can Reach The Sky was born over a conversation with Ellison while having really nice gelato. Haha. I remember us telling each other that we love babies and it will really be a dream come true doing what we love (theatre) with people whom we love (babies). And then we started. We saw a gap in the industry and having an emotional connection with the target audience is what I feel drove us/me to step into this. Babies are such complex creatures. At any one second, they could be experiencing many different types of stimulations and emotions. As we grow older, we tend to lose this kind of sensitivity because of our social environment and conditioning. So the name "The Wanderlings" came about because we like the word "wander". To wander is a luxury for us adults and it's something important for babies as well, but we observe a potential lack of wander. We are quick to give the babies an iPad to play with when they are fussing around because we think they're "bored". We hope that through The Wanderlings, we can provide a safe and comfortable space for babies, young people and adults to wander; to explore an object or emotion or thought without distractions; to negotiate with the stimulations they are receiving and eventually through this process or experience; to feel light and infinite. Hence, we use a dandelion as a motif for The Wanderlings, which is also the main character of You Can Reach The Sky.

Tan: In 2017, a lot of our creative decisions were intuitive, and very heavily based on the test-showings we did. We had a narrative, which we split into six segments, and we tested each segment heavily with various elements. And for each test-showing, we would observe which element the baby would respond more eagerly towards (they were more stimulated). Of course, this test has limitations, the biggest limitation is assuming that all babies are the same, but at that time, that [factor] was what we were interested in discovering, so we stuck to that.

In early 2018, I was in Tokyo for the same program, but this time they invited a Doctor who specialises in baby theatre, and who also specialises in the neuro-behaviour of children. Her approach is very scientific, almost methodological, very easy to follow and learn, and that really change things for me. I start to see clearly how I can marry narrative, shapes, textures, movements and sounds to curate a specific journey for an individual. I begin to look at the audience (or the baby) as an individual with more sensitive needs, instead of just a baby and that really change things for me.

The new staging takes care of all the parties in the space - from babies to mummies, and even grandparents. Every new element we introduce into the show is layered, to scaffold the experience of the show. We find that it is also very suitable for individuals with special needs.

Loke: Space is very important as well. The staging in 2017 and the one we had in October 2018 were in different spaces and this influenced the way we designed the show and how we move as performers. With different spaces comes different sets of challenges and stimulations. In 2017, it was at The Artground, where we had moving lights. In Centre 42 this year, we did not have moving lights but we had natural light. Both shows looked different aesthetically but it was still amazing (:

In the recent October staging, we had audience members from very varied communities. When you get people from a vast background, you get a variety of energies and responses. We got to see how the space and the show transform differently each time. It is as if You Can Reach The Sky is constantly changing and evolving, and it is something that excites us. 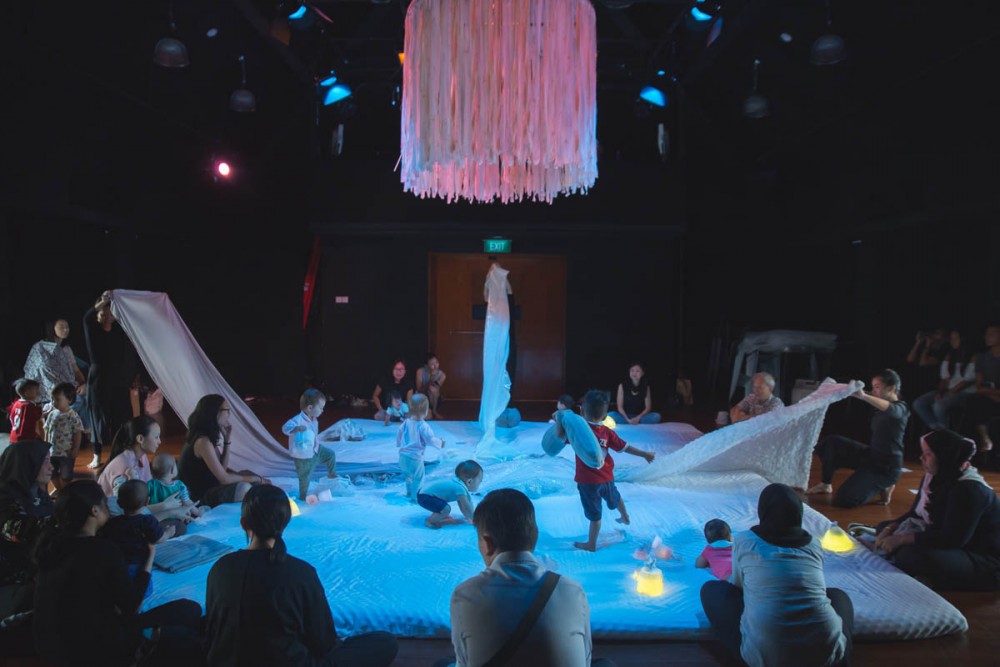 3. How are babies different from adults as theatre audience, from the perspective of theatre-makers?

Babies are different from adults in many scientific ways - cognitively, psychomotor-wise etc. Their attention span is shorter and their reactions are more organic. They're much more sensitive and intuitive. But we also have to recognise that the baby is essentially an adult who is free from cultural influences, prejudice, judgement, and layers and layers of pretence. So in some ways, the same philosophy applies to both groups of audience - sincerity, and a lot of heart.

4. What do you think parents can take away from the show?

The entire show is made out of very recognisable household items, and can be bought from hardware stores/Ikea/Daiso. We invite the audience members to stay in the space after the show, and we introduce them to the elements within the show and show them how everything is made. The intention behind this is to let them know that they can do this too. Two-way engagement is so much more precious than a one-way one, and it can happen anywhere, even in your home. Anything at home can be made magical as long as you make it so.

5. Share with us, how the experience of producing You Can Reach The Sky change the way you create other forms of theatre.

Tan: I became very aware of the audience experience from start to finish. I think when we make theatre for adults, we don't really think about how the audience feels before entering the space. For mothers with babies, it's an entirely different ball game. They travel here with diaper bags, a baby as heavy as a sack of rice, who might be making a fuss. They might be going to a new place, somewhere they're not familiar with. Before reaching the theatre, they're already a bundle of nerves. We want them to enter the space and feel safe and reassured immediately, so we take very special care to curate their experiences even before they come for the show. It gets me thinking about the way we care for our audience members. I suppose that extends to the care we have for people in general too.

Loke: I used to be really particular/anal about the images I want to create on stage, as a director or as a performer. However, with You Can Reach The Sky, there is just no one show that is the same. They respond to the show very directly and every response is so different from another. Sometimes, we have to give up certain important moments or change the trajectory of the show during the performance itself, because they may be moving our props around or be sitting on our set pieces, or they might seem more sensitive or scared. I used to feel like "Oh we didn't get to do this. What a waste". But now, I recognise what is important as a performer is to just be in the moment with my audience and to really listen to them and ride along with them. It shapes how I create my work, as every decision is made with the audience in mind and how they relate to what I propose on stage. 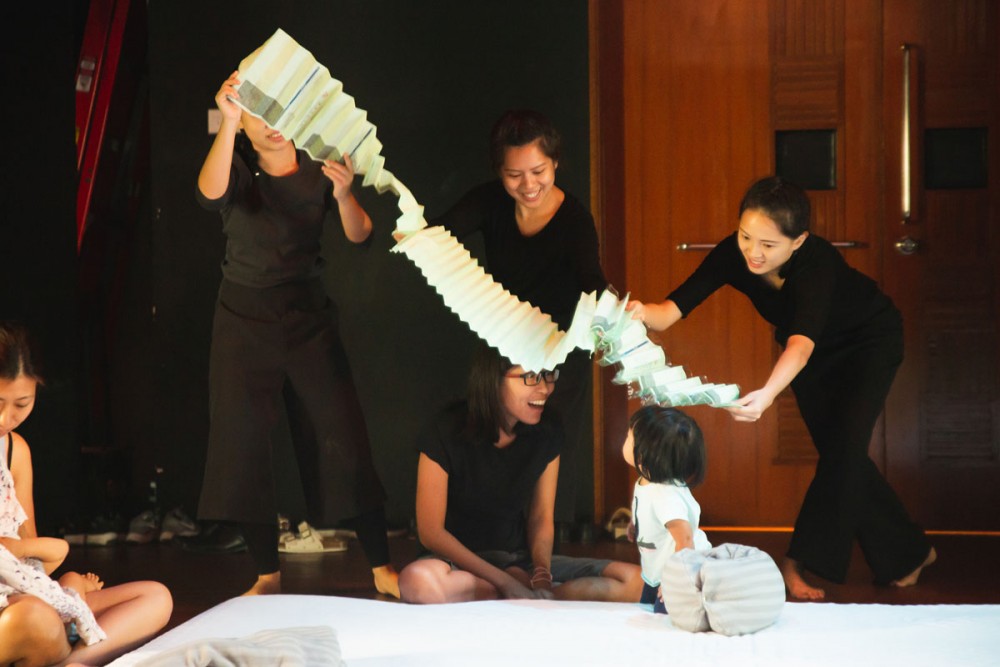 You Can Reach The Sky
by The Wanderlings
Date: 23 - 28 Dec 2018
Venue: The Artground, Goodman Arts Centre
Visit event page