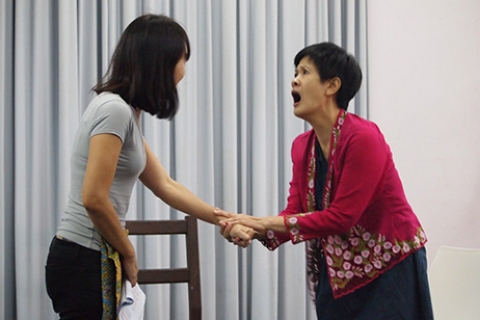 I always think that birthday celebrations could be more than shiny parties and gleeful gatherings. Birthday presents, too, do not need luxurious appearances and lavish wrappings to serve their purpose. This is especially so for our beloved arts centre – Esplanade, when it celebrated its 10th anniversary two years ago. A performance with a simple set and two actors ranting and raving, was commissioned for the celebration. Set to be restaged next month, Rant & Rave is a dramatised history of the theatre scene in Singapore, focusing on discussions and debates between artists, reviewers and other personalities from past to present. Award-winning director Chong Tze Chien wrote the script and directs a two-(wo)man cast in this creative reconstruction of the precious memories. 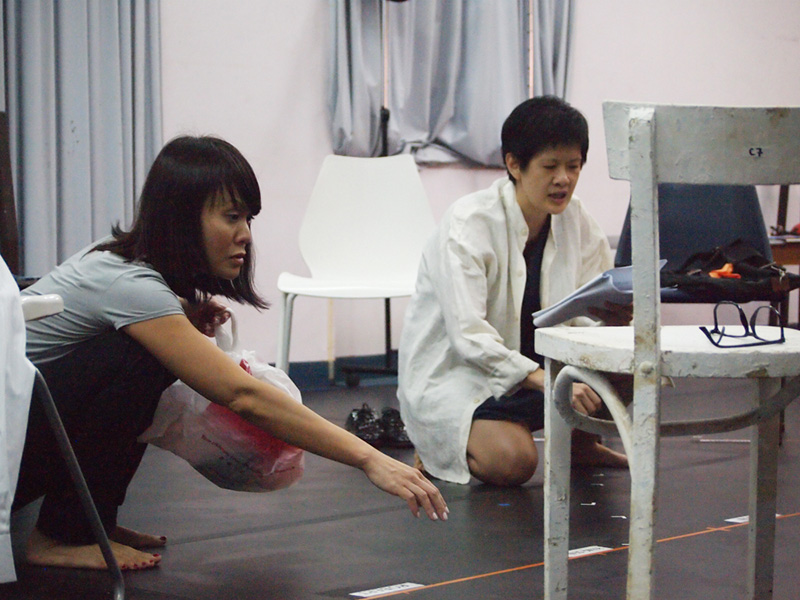 We were honoured to be given an opportunity to preview the show during their rehearsal in The Finger Players’ studio at ONE-TWO-SIX Cairnhill Arts Centre. Chairs set in a circular formation occupying the central area of the performance space suggested dynamic exchanges of speeches and actions. And this was soon realised by the capable cast, Karen Tan and Janice Koh. Even without their full costumes and props, Tan and Koh delivered an energetic performance and brought us on a roller coaster ride of emotions. I was most impressed with their witty and accurate portrayal of a wide range of personalities. These characters were mostly male, of different races, spoke in different accents and languages, and possessed different habitual body languages. In this preview of merely 20 minutes, I had already lost count of the number of character transitions that took place on stage. Amazingly, even in a dense scene like this, the flow of scenarios was clear and engaging.

An immense amount of archived information and materials were contained in the performers’ speech and projected visuals in the background. Unfortunately, a complete choreography of movements and positioning, which is crucial to complement the heavily text-based content, was somewhat lacking in this rehearsal. I foresee more interactions between the performers, the set and the space in the actual performance, as I would legitimately expect the circular formation of chairs and the projections to provide an effective platform for an hour of earnest reflection and entertaining experience.

Rant & Rave recollects some of the most important chapters in our arts history and presents them in a digestible form for the audience. This concept is commendable as we, in Singapore, tend to get things to move on and forget how things come by. The Finger Players invites us to recall these buried memories by handling serious issues with an amusing tone. Will the presentation be compelling enough to trigger thnking among the audience? Will this presentation contribute answers to what our arts should be like? Will a work with much localised content generate universal artistic value? Or, will it solely provide an avenue to rant and rave about our outrage and frustration? Could it be a meaningful memorabilia for our nation’s 50th birthday next year? Let’s find out.

Rant & Rave is part of Esplanade’s The Studios series. It runs from 1 to 4 May 2014 at the Esplanade Theatre Studio.