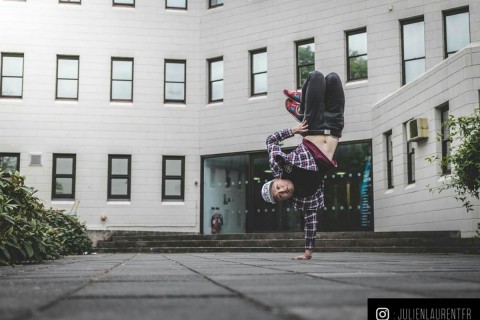 dead was the body till i taught it how to move looks into the struggles and pressures faced by our youths today. Sometimes, life throws you a curveball like the death of a family member, or at the same time, having to deal with your mental health issue and the possibility of losing the capacity to earn a living, what/where/who can you turn to?

As Dominic Nah prepares for a career in teaching, he discovers a pressing need to revisit his life events to understand himself better. And hopefully, find a way to reconcile with his past so that he can be himself truly. This play is based on his biography and Dominic plays himself.

We speak to Dominic to find out what some things mean to him.

1.   What does physical movement in theatre mean to you? How and why did u get interested in this aspect?

Physical movement in theatre is not an easy language to speak with. But if I were to take a stab at it from my current perspective, physical movement is about embodying as free and full an expression that I possibly can, in service of a given story or experience. But the difficult thing is that there is so much to unpack and unlearn about my own body, and its stilted and awkward ways of moving.

When I was younger, while in my school's drama club, I would find myself feeling that there is more I could do to express myself, or my characters, if I could learn a physical vocabulary of movement. But it wasn't until I picked up parkour for a year when I was 20, and later discovered b-boying in my first year of university, that I [began to have] a more concrete understanding of what my body could potentially do. As a form of expression in theatre, [physical movement] isn't something I have been conscientiously applying as yet. Perhaps, this production has given me a critical start to think about how I could approach physical theatre from here on. 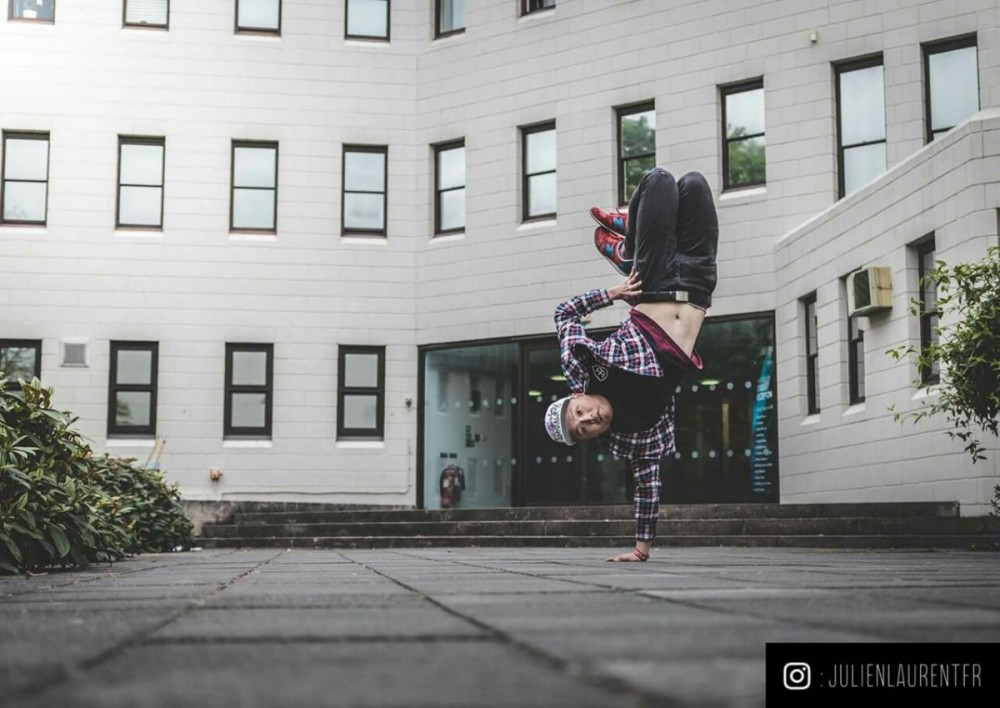 B-boying is so many things at once for me, to varying degrees at different times. It has turned out to be an outlet and an escape into an imagined community when I find myself stuck in other parts of my life. Most times, I see it as an ongoing pursuit of me wanting to develop a form of my own expression where words cannot reach. That sounds a little abstract and fluffy, but if I may, let me use the fact that movement does not lie: If I record myself or others watch me move, everything of me is revealed in the movement; if I am slack and unconscientious, it will be discernable; if I am committed and present in the moment, the moves will carry that through. The movement does not lie, and the key is in the moving.

I suppose I also relate (in some oblique way) to the socio-economic environment [that gave rise to] the origins of b-boying in the underprivileged Bronx of the 1970s. Even though I have earned the privilege of studying in university, I have always had a strong attachment to my family's working-class background. This has led to an increasingly complicated relationship with class status for me over the years as I have picked up opportunities through education I never believed possible for myself while growing up. I might be appropriating the culture here but to me, b-boying as a core element of hip-hop and having its roots in the streets reminds me somehow of the just-getting-by background I've come from and in many ways still am.

Actually this has got to do with the highs and lows that I find myself swinging back and forth into, sometimes being in depressive slumps and other times very excitable and more impulsive. It's my silly little metaphor to externalise my mental health condition I've seeking help and working on, and I was finally being diagnosed on the lower end of the bipolar spectrum (cyclothymia) in the last year after struggling a long time with a nameless spectre. It's something I'm quite open about as a means of reaching out for support but also taking responsibility for my own health and not to use it as a crutch or an excuse.

4.   Is the University of Warwick what brought you and Edward (Eng, playwright) together for this project? How did the collaboration come about?

Yes, it was. We were both Singaporeans studying at the University of Warwick and we had a common interest in theatre and the literary arts. We worked on a couple of the Warwick Singapore Society productions together in 2016 and 2017. In May 2017, I was supposed to perform in a student production called Springtime in a Small Town written by Edward, but I bailed and I was basically hiding away from the world in my [room]. I guess I was in a really bad slump then. He came to look for me to see if I was better. Over time, he realised that perhaps there was a story there, especially since I had told him about the trip I made to the Bronx in New York City a month earlier, during which I went on a quest in search of some of the original and old-school practitioners [of b-boying] and ended up meeting several of them, as chance and fate would have it. Edward was very taken by that, what he called a 'fever dream' and later in 2017 he read some of my poetry which was rather autobiographical. Slowly but surely, the idea of a monologue work – weaving my personal life and my b-boying journey – started to emerge. These days, I describe the play as made up of his words but not his words, and my words but not my words. It is a really unique meeting point between the both of us. 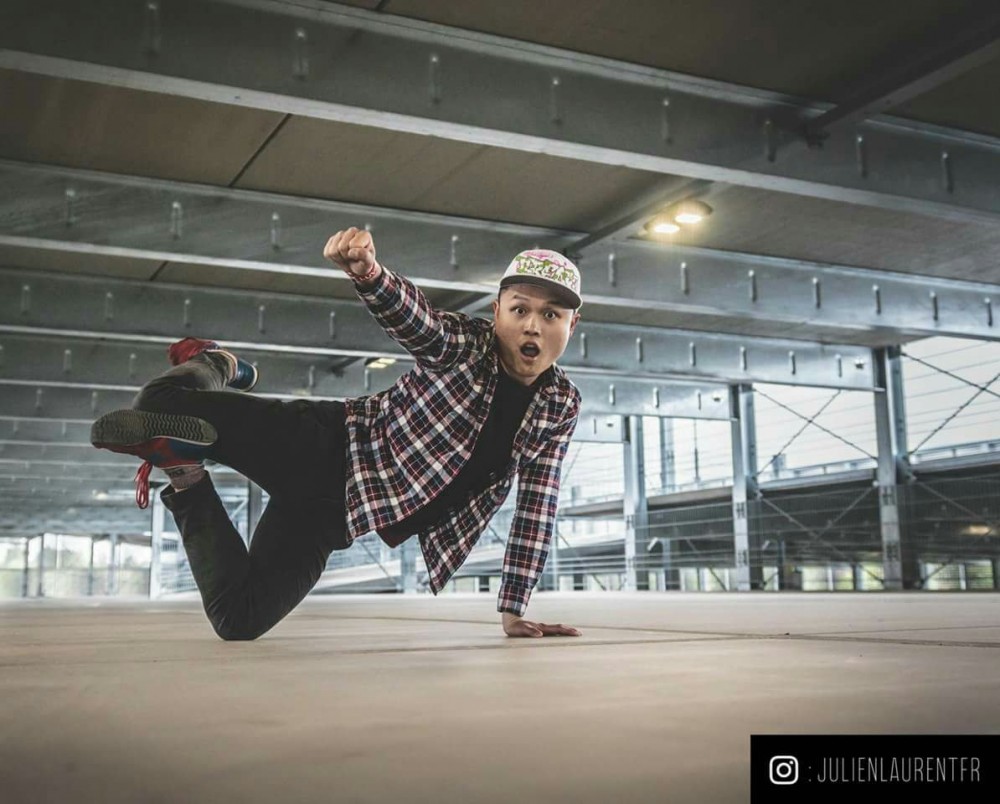 5.   The introduction to this play sounds like a very personal, introspective story. Will audience who are not into dance be able to appreciate the vocabulary or the struggles the protagonist may be going through in the play?

I have to preface my response here: Firstly, I think I am not a very good or experienced b-boy. Any experienced b-boy or b-girl will be able to estimate my experience level based on how I move. I've been breaking for about 4.5 years now on and off, much more so in the last 2.5 years but training progress has not been linear.

A consistent question we have asked ourselves in the creative process is how exactly are we creating a meaningful integration of monologue theatre and breaking as a dance form, in service of a story that is so individualised? What became increasingly clear through the dramaturgy, the writing and the direction was that my story is rooted in my search for role models and father figures, having lost my father through betrayal and death, as well as finding ways for myself to move on, move through knowing all this.

Also, we are clear that we are not putting up a dance theatre performance. Through my journey of discovering breaking and sinking myself into that culture, we hope to give audiences a glimpse of what breaking can mean to b-boys and b-girls. The movement is not in an abstract vacuum but always tied to my biography, and as an expression of emotional state.

There may be barriers to entry in understanding a dance form that audience members are largely not practitioners of, but having had a writer, director and producer who are all not dancers themselves, we have spent time finding ways to communicate the language and signs of the dance and subculture to each other. We hope [we have created] enough openings in the narrative and direction so that the segments where I dance come across as contextually and affectively meaningful in the story, even if audience members don't have the movement vocabulary to read in great detail.

Having said that, it is precisely the effect of a subculture that the nature of inclusion and exclusion occurs between those who have an awareness and those who do not. There will be layers of meaning in movement that we want dancers themselves to be able to appreciate, but that shouldn't detract from the narrative. At the core, the piece is unravelling but also preserving how integrated and instrumental breaking has been for me in the last 4 to 5 years of my life, as I wrestle with coming to terms with an unresolved tension with my late father.

Dominic NAH, editor-in-chief for UNSEEN, is an obedient rebel. Since completing his MA in World Literature (2016/17) and BA in English Literature (2013-16) both at the University of Warwick, he is back home in Singapore keen on integrating teaching, b-boying and writing into forces for unknown good. He is presently working on various projects on Google Docs with poetry, dramatic writing, screenwriting, prose fiction, essays and education issues (will he ever finish any of them?). He remains a proud Xinmin Sec, VJC and Warwick Uni alumnus, and carries a greymonkey around most days. Classroom interventions in Xinmin Secondary and Victoria JC converted this once fiction-hater to an aspiring literature teacher. This b-boy and wrestling fan is working on his writing, concentration issues and hopes to start connecting literature lurkers in Singapore.

About Bhumi Collective
Bhumi Collective is the point of convergence for artists making art in a borderless world.
We are a producing company which believes in the lesser seen, lesser heard and the lesser talked about, at our heart. We believe in facilitating the process of art-making between artists of different disciplines, from sparking initial conversations to realising ideas on the stage. We work across genres and forms to tell stories that embrace our differences in race, religion, colour and circumstances while constantly finding commonalities that connect us.
We are creators, we are producers, we are Bhumi.