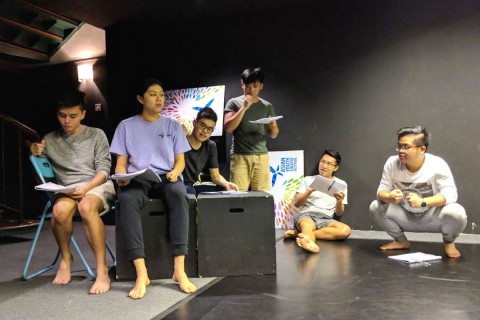 The Second Breakfast Company (2BCo) just staged a new playscript by up-and-coming playwright, Isaiah Christopher Lee, at the Gateway Theatre Black Box, as part of their main season. The Old Woman and the Ox is selected from a pool of over 40 scripts that the Company received through an open call in 2017. After working with Lee for over a year on the script, the play is set to explore themes of fear, guilt, loss and love. 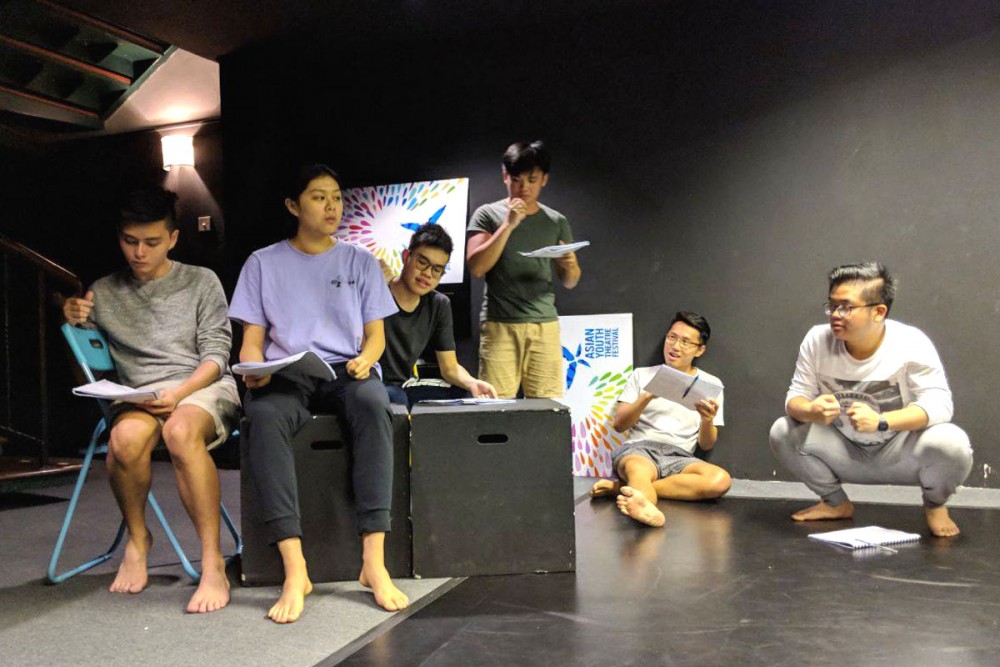 Artistic Directors Adeeb Fazah and Mark Cheong mention that they want to create an immersive and sensorial experience for the audience since the play focuses on the memory of trauma and one’s projection of expectations onto others and themselves. They hope to do justice to the story by evolving the way they use the stage.

We caught the play and thought the script is a challenge to stage. We speak to Adeeb to find out some of the rationales he had and difficult decisions to make as a director for The Old Woman and the Ox.

1. Can you tell us a little about your residence programme with Gateway Theatre, and the mentorship with Samantha Scott-Blackhall?

The Gateway Residency allows me to develop my craft as a director. Under the mentorship of Samantha Scott-Blackhall, I will be working on developing a work in the space. I am allocated some money and access to the rehearsal space in the building and will present my work(s) in the Black Box. Samantha will be guiding me through this, asking questions and giving me pointers and advice. Up till now, my only training as a director has been on the job, and I appreciate the mentorship that comes with the residency as it will be a fruitful way to look back at the things I’ve learnt over the years, and also to sharpen my skills as a director.

2. For The Old Woman and the Ox, what were some issues you had to work out with playwright, or with your mentor? Were there any pointers that you put aside because you had some ideas you wanted to experiment with? Or some parts in the script that you wanted to preserve in the play?

The text is so rich and dense, and yet it is full of ambiguities and mystery. This proves to be a fun element to the staging of the work because during each discussion, reading and rehearsal, we will discover something new about the story, about the condition of the characters. Of course, there are some knots that are harder to untangle, or some mysteries not easily resolved. So, a dialogue is bound to happen with the playwright. It helps that Isaiah is in the rehearsal room all the time since he is part of the ensemble. We will sometimes ask simple questions like "What does this refer to?" or "Who is this directed at?" and Isaiah will give us a teaser of what went into the writing - just enough for us to work with. Some of the stories are inspired by Isaiah's real experiences, so getting to know him on a deeper level was part of our process of uncovering the things that happen in the play.

Interestingly, one of the things I did without much of the playwright’s considerations in mind, was the physical space that we were building. The stage directions written in the playscript are also very precise and elaborate, but I did not follow them closely. I think it is important for me to fully digest the character journeys first, and see what significant things to have in the space. Some things I kept, some things I threw out, and some things I added; all to create the most cohesive universe that supports the story.

The advice I receive from Samantha have more to do with how I work as a director. Sometimes she would sit in to observe a rehearsal, sometimes we would have sit down sessions to catch up on what I have been doing and what needs to be done, and how it can be done. One advice she gave was to ask more questions in the rehearsal room, rather than giving instructions point blank to my actors. This helps us to get a richer interpretation and performance of the text. Beyond that, Samantha has allowed me to exercise my own creative license as long as it follows some kind of logic.

3. After directing and creating serveral plays, have you found some signatures that you’ll like to keep for future plays, or are you still finding your style?

I find my reading of scripts involves a lot of visual imaginations of what the play might look like being staged. I'm always thinking of the “stage picture” as a starting point for communication. I read somewhere that a lot of communication is visual, so I feel strongly that each mis-en-scene should require meticulous thoughts. If I were to remove the words from a play but still run it, will the performance be able to communicate the same ideas?

4. I think you have a penchant for ensemble.

I've come to love the ensemble as I can have more to play with when creating the stage picture. At times, I get lost in a mass/mess of bodies on stage, but when it comes together nicely, the ensemble can elevate the story to a new level. I've also come to realise that I cannot leave black patches of stage flooring untouched anymore - I need to fill them up with some textures or colours, because black feels like a void; it feels like I haven’t think about what to do with that part of my picture. Alas, in many situations, my control over the stage picture becomes less of a priority for whatever logistical reasons (eg, no money for flooring, focus is on the text or ideas surrounding the text, it is a one-off performance, etc).

5. What are you gravitating towards?

I think the more productions I work on, the more potential I unlock in a way I can tap into different elements of theatre. I think I mentioned this earlier about orchestrating the mis-en-scene to tell a story. I'm inspired by performances that can bring together multiple elements to create a subtle yet sensorial experience that can move the audience in more ways than the cognitive effects of the text.

Beyond visual composition, I think I'm also amazed by performers who can fully harness the power of the breath. I find myself telling actors to 'breathe more'. I think as an audience, I yearn to hear more texture - smoothness or roughness of how a person communicates using words. Beyond enunciating the words, how does your act of saying the words inform the audience about the conditions of a character?

After working on dead was the body till i taught it how to move, I think a lot more about an actor's instruments. Working with many young (and young-ish) actors, I see much potential to condition these bodies and their instruments for performances. Hence, I have started thinking more about warm-up exercises that help condition an actor's control over their vocal instruments. I guess these are some simple exercises that I find useful in opening up and conditioning the voice, which I have  had the oportunity to learn from various teachers over the years.