At the Rehearsals of The Struggle: Years Later 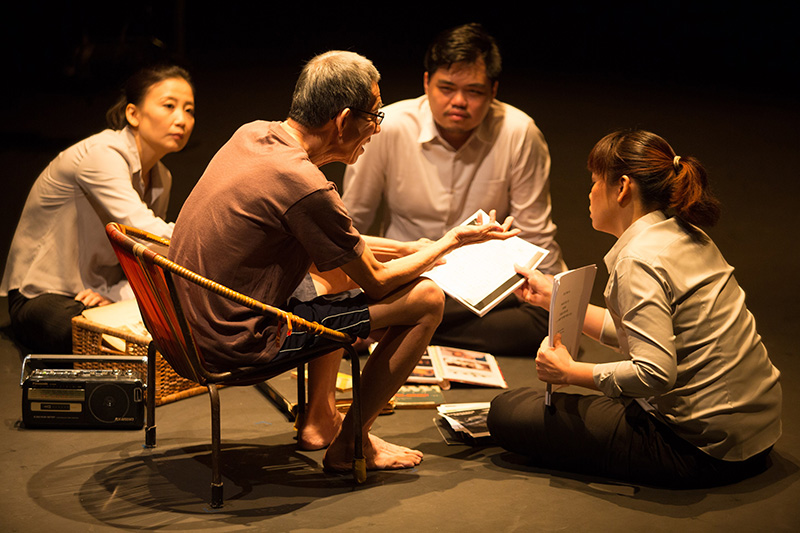 Before we had a tape recorder (the kind that records television programmes) in our house, we had a radio recorder. It was a routine in my family to record Comedy Night (搞笑行动) (featuring Liang Po Po) on a cassette tape, for us to revisit on another night. Ya, we only had an audio recording of the show, cued laughters included. But the audio recordings alone never fail to make us laugh again when we replay the familiar scenes in our heads as we drift off to sleep.

I was overcome by nostalgia when I heard an audio recording at the rehearsals. Director Liu Xiaoyi managed to inject a segment of a 1970’s crosstalk performance in his adaptation of Kuo Pao Kun’s The Struggle. I was told the casette tape was retrieved from veteran thespian Yong Ser Pin’s archive. The team came across the recording while lending their ears to Yong’s oral history of the struggles in theatre back then. This crosstalk recording will play a vital role in manifesting the spirit of the original playwright, Kuo Pao Kun himself. So, brace youself.

As the title of the adaptation suggests, the director aims to explore the struggle of the working class against impending capitalism – on hindsight. He attempts to bring relevance to the piece of foregone history by injecting a present-day perspective. It becomes particularly apt that Yong plays himself (amongst other roles) to reminisce the past, and also reflect on his role in the original play, 46 years on.

Similar to Xiaoyi’s previous plays, The Struggle: Years Later does not seem to have a linear narrative structure. Xiaoyi reveals that he is more interested in seeing how the different storytelling forms applied to each scene play out as the story unfolds. The first scene at the reherasal opens with a clinical 1-table-2-chairs setting and evolves into a wild-goose chase eventually. The structure of each successive scene gains complexity to parallel the storyline.

No stranger to collective creations, the “eclectic ensemble” – including Yong Ser Pin, Kuo Jing Hong, Doreen Toh, Felix Hung, Chong Woon Yong, Ric Liu and Liu Xiaoyi – went through a series of workshops to produce this devised piece. I believe collaborations were made with several artists, one of whom is sound artist Darren Ng. So, look out for the subtle play on sounds.

We have yet to see the sets or any projections yet at the rehearsals. Based on our past experiences with Xiaoyi’s plays, we cannot wait to see how the visual projections will complete the acts.

In 1969, Kuo Pao Kun wrote and directed The Struggle, which was banned by the government two weeks before its opening. The artistic team was forced to replace the performance with poetry recital and skits. The Struggle remained as Kuo Pao Kun’s only script yet to be staged. It reflects upon the social turmoil resulting from rapid urban development and people’s struggles against these changes back in the 70s.