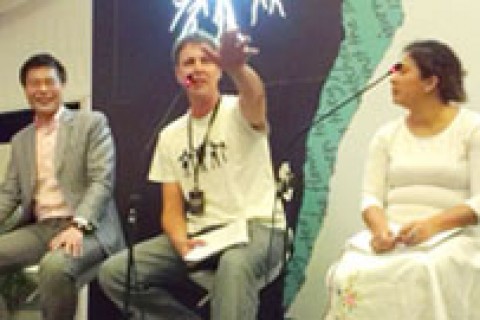 We rushed to the ilovebooks.com Pavilion for the closing debate, as we knew it would be a popular event; but having said that, we were still shocked by the crowd that had already accumulated inside. I wasn’t sure that such popularity was due to its reputation as an entertaining event, or the significance of the topic that was going to be debated.

“Sinking Roots Here is Little More Than Shopping and Eating” was the motion of the proposition. I think this would be a sure-lose idea if the debate was carried in a serious tone. However the atmosphere inside the jam-packed pavilion suggested otherwise. Witty introduction of the equally witty debaters by the moderator, the forever elegant Gene Tan, confirmed that this closing event would end the festival with a bang.

Lye Kah Cheong, Neil Humphreys and Zizi Azah, who made up the proposition team, cited various historical and societal ‘facts’ to convince everyone that all the wants, aspirations and desires converged to two simple points: shopping and eating. Gwee Li Sui, Ovidia Yu and Adrian Tan opposed the motion by quoting piping hot news concerning several people ‘over-manipulating their passion’, and stressed that these ‘passionate stories’ (a.k.a. scandals) and the attention they generated played a better role in uniting Singaporeans.

It was actually not hard to guess which side would win the debate. The opposition with points that grasped the pulse of the society had been leading in the popularity race and won the final deciding vote. The proposition was rather restricted by the prevailing interpretation of the terms ‘shopping’ and ‘eating’, although I personally thought they had done their research and showed more evidence than the opposition did.

Again, events like this would be a guarantee in popularity and audience participation. As much as the people are not sure about where they came from and where they are going to, I feel the people are sure that they need spaces for voicing out what they think and feel. One of my findings in the festival is that, the people have lots of doubts to clear and opinions to put forward on any issue that includes words like ‘our’ or ‘Singapore’ in the title. While we discuss ways to increase readership, I guess the themes that will possibly contribute to some of the best-selling books have emerged.

I still don’t know if the crowd was actually interested in the debate or the anticipated entertaining factors. I just hope if these topics do come out in the books they will be lining up at the cashier counters of the few surviving bookstores in Singapore.