The stage is bathed in a jarring wash of neon purple and green lights – an ominous greeting. Four mounts of shredded paper lie motionless on stage and one atop a table adorned with four chairs. The Finger Players’ latest restaging of The Spirits Play, begins with the faint sound of rustling leaves, then, three ghostly figures (Jo Kwek, Myra Loke, Jasmine Xie) appear, dressed fully in black. Reminiscent of the three witches from Shakespeare’s Macbeth, they cackle, groan, and retch, creating an unsettling and suspenseful atmosphere. They speak cryptically about snow, rain, and blood, painting fragments of an immense destruction in the aftermath of an unnamed war and setting a dark tone for this evening’s performance. 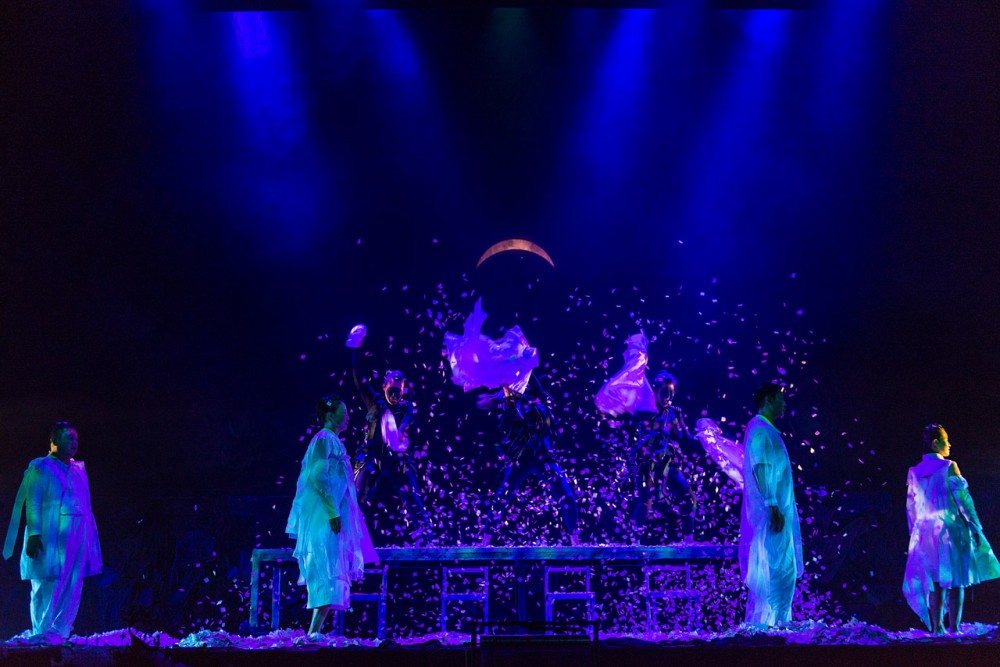 A Kuo Pao Kun classic (and also one of his heaviest plays), The Spirits Play is a haunting, anti-war work that features five unsettled spirits who share stories about their experiences in the war and reasons for their deaths. Since the plot rests on the monologues of the five ghosts, the characters and anecdotes essentially form the bedrock of the play.

As the spirits come to life, the first three – Mother, Man, and Girl – begin recounting their past lives. The Mother (Doreen Toh), who was left widowed with her son after losing her husband to the war; the Man (Tay Kong Hui), whose idealism was shattered upon witnessing the brutal deaths of his fellow soldiers; and the Girl (Tay Wan Sze), a nurse who was forced to serve her country(men) as a comfort woman. Their initially measured recollections quickly escalate into anguished, emotional outbursts when confronting the physical and psychological traumas they suffered. The second set of monologues explores the clashes in perspectives between a dogmatic General’s (Johnny Ng) absolutist views on the necessary sacrifices for an arbitrary “greater good” against an empathetic Poet’s (Alvin Chiam) nuanced views on the complexities that eclipse the General’s justification of the war. All five actors not only deliver compelling performances of their interlocking monologues, but also capitalise on each other’s energies to maintain a steady sense of momentum towards the climactic confrontations and revelations.

One particular feature of The Finger Players’ production that stands out is the centrality of rhythm, most literally manifested in Kuo’s script where the lyrical cadences of vivid mandarin adjectives imbue the work with a poignant and poetic quality. The play’s rhythmic cohesiveness is further enhanced through sound designer Darren Ng’s choice of sounds, especially the ominous drum beats that punctuate the ghosts’ ritualistic dances at the start and end of the play. Praise must also be given to director Oliver Chong’s sensitive and masterful grasp of timing in his choreography of the actors’ movement, which synchronise perfectly with the raw sounds to create an impression of larger supernatural forces at work in this hellish netherworld, thus reinforcing the play’s eerie atmosphere. The Spirits Play is also richly peppered with cyclical motifs that engender a pervasive sense of entrapment. The diction of the work features several instances of circumlocution, such as in the ghosts’ musings and their repeated references to an endless changing of seasons. On a visual level, there are projections of a moon that wanes and waxes as the play progresses and the recurring appearances of planes and bombs created through the use of shadow puppets, which serve as a stark reminder of the war’s ever-looming presence. Finally, and perhaps most saliently, the play ends in the way it begins; rather than obtaining closure, the characters are left to despair over the futility of their struggles.

In its exploration of universal issues such as the human propensity for violence, Kuo Pao Kun’s timeless play presents an incisive, unflinching reflection on the woeful grievances that innocents suffer and the unchecked dangers of wilful ignorance in the context of a war. With the growing threats of terrorism and nuclear missiles, The Finger Players’ polished performance of The Spirits Play comes at an apt time and provides a powerful cautionary warning – or perhaps, reminder – about the death, decay, and destruction that war brings.

About the reviewer:
Alicia is a Liberal Arts graduate with specialisations in English Literature, Critical Theory, and Classical Music. She is fascinated with the ways in which the arts examine, reflect and enrich the human condition. Her main interests revolve around the intersection of various art forms in the production of multi-disciplinary works and their potential in communicating new ideas and challenging artistic conventions, especially in contemporary society.