10 May 2014
Article by Mary Mazzilli
Photos by Pangdemonium 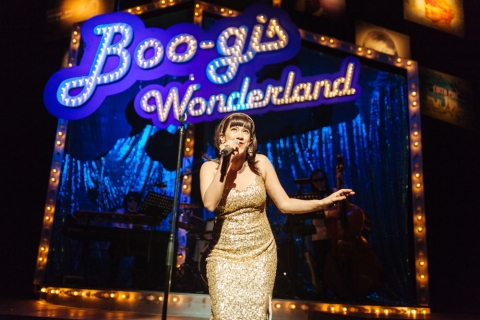 Jim Cartwright’s 1992 The Rise & Fall of Little Voice is a new Pangdemonium production now running at Drama Centre Theatre till 18th May. 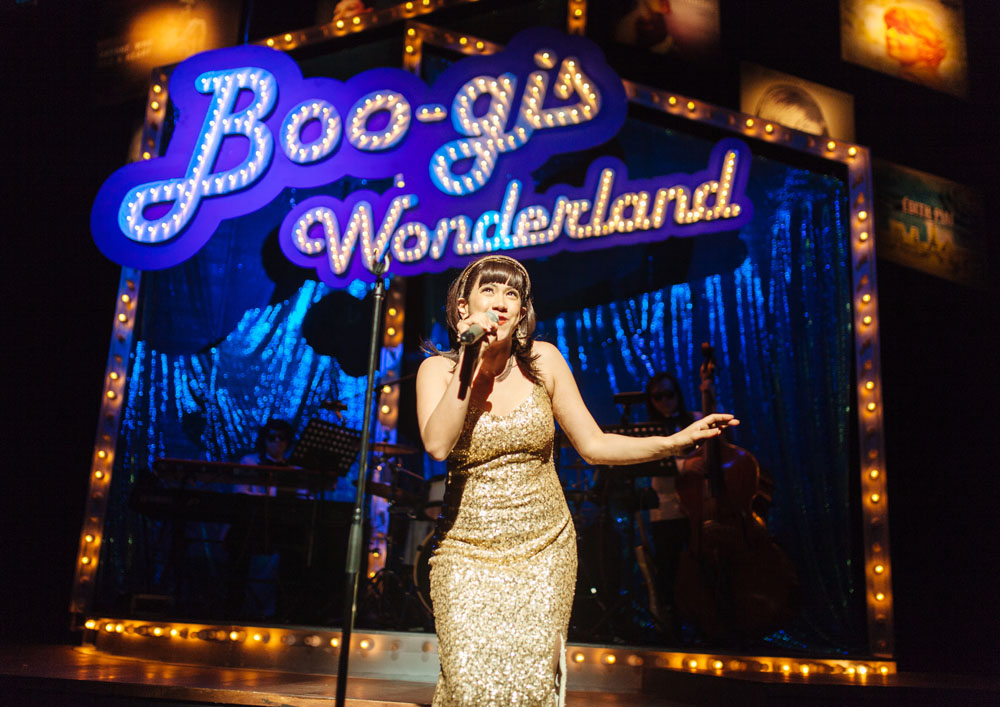 The play that won the Laurence Olivier Award for “Best Comedy”, the Evening Standard Award for “Best Comedy” and was adapted in the 1999 Mark Herman’s acclaimed film, Little Voice, tells the story of the shy LV (Mina Kaye), who spends her days listening to her late father’s old records. It is a coming-of-age tale that sees LV searching for her identity as she struggles to reach out to the adults around her, especially her loud, lowly and alcoholic mother, Mari (Denise Tan), who is more interested in her men than her daughter. LV hardly speaks; she shuts herself from the world, but she has a secret talent – an extraordinary singing voice. When Ray Say (Adrian Pang), Mari’s shady boyfriend and talent scout, overheard her voice, he puts a plan into place to make LV a big star, mainly to boost his own career. Mari also sees in this her ticket to a fortune. However, LV who just started bonding with Billy (Shane Mardjuki), a reserved telephone engineer and light enthusiast, is reluctant to showcase her voice to the public. But none of the adults really seems to care.

The script presents a heartfelt and humorous story that Pangdemonium managed to tell it as their own, honestly and earnestly. This is Pangdemonium’s first production that is set in Singapore; many local references and jokes injected a local flavour. The use of a cabaret setting also succeeded in making the audience – some of whom were seated at round tables in front of the stage – a part of the show, transforming the Drama Centre stage into a cabaret venue.

A three-men music band, complete with bass, piano and drum, welcomed the audience as they took their seats. Rishi Budhrani played the host, (and also Mr Boo, the owner of the cabaret venue) opened the show with several jokes about the band and Singapore, and went on to introduce the play itself that was about to begin. The band on the revolving stage gave way to the internal set of Mari and LV’s apartment. They came back later as part of the cabaret event where LV was supposed to sing. Rishi and the band never failed to entertain and humour the audience. With the likes of a stand-up comedian, Rishi was always looking for the next joke to tell. This element of humour injected by Tracey Pang worked very well in localising the play and making it truly Singaporean. 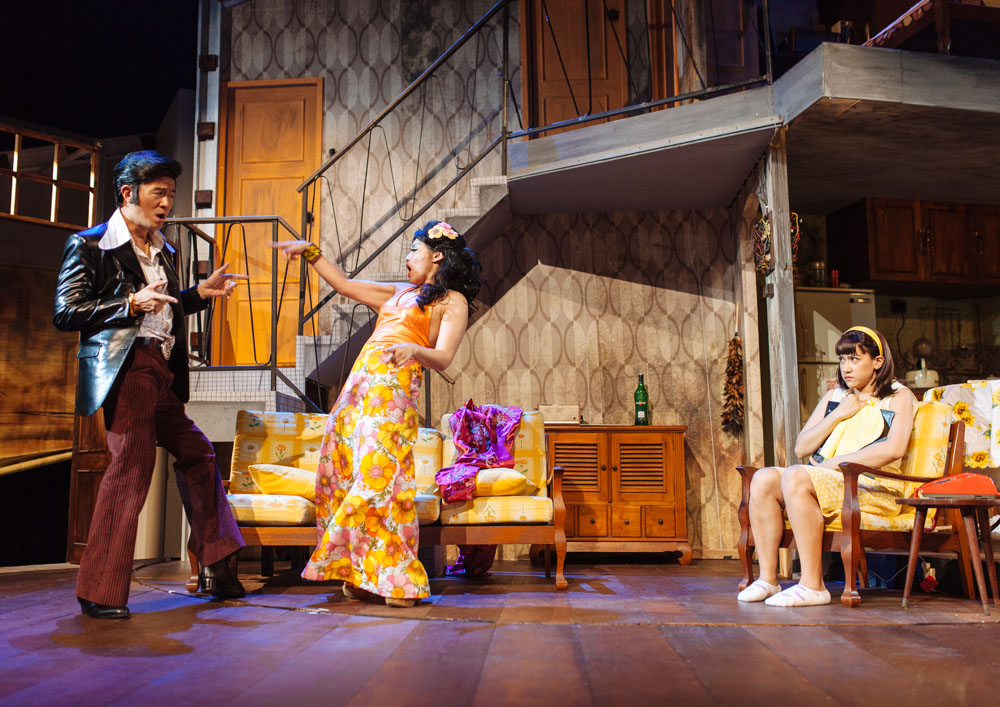 The humour of the play was also well carried through, via the comical performances of the hilarious Denise Tan and the maverick Adrian Pang, not forgetting also the delicious Siti Khalijah, who played Mari’s confidant. In the first half, the show was never short of laughs, although at times at risk of being slightly too spastic and a bit banal. It got it right in the second half as it introduced the darker, sadder part of the story, when everything and everybody fell apart.

I feel that the real protagonist of the show was really the musical culture that this show celebrated. The pictures that were hung from the stage ceiling commemorated the famous divas like Shirley Bassey, Marilyn Monroe, Barbra Streisand, Edith Piaf, Judy Garland, etc. The voice of these old icons was LV’s world, until she learned otherwise. The brilliant vocalist Mina Kaye fitted LV’s shoes perfectly as she put on LV’s submissive talking voice and powerfully sang the legendary tunes of the famous divas.

This is a show that offers everything from humour, sadness, a moral lesson about greed and growing-up, vocal brilliance and as always with the Pangdemonium, a well-done, high quality production of Broadway or London West End calibre. 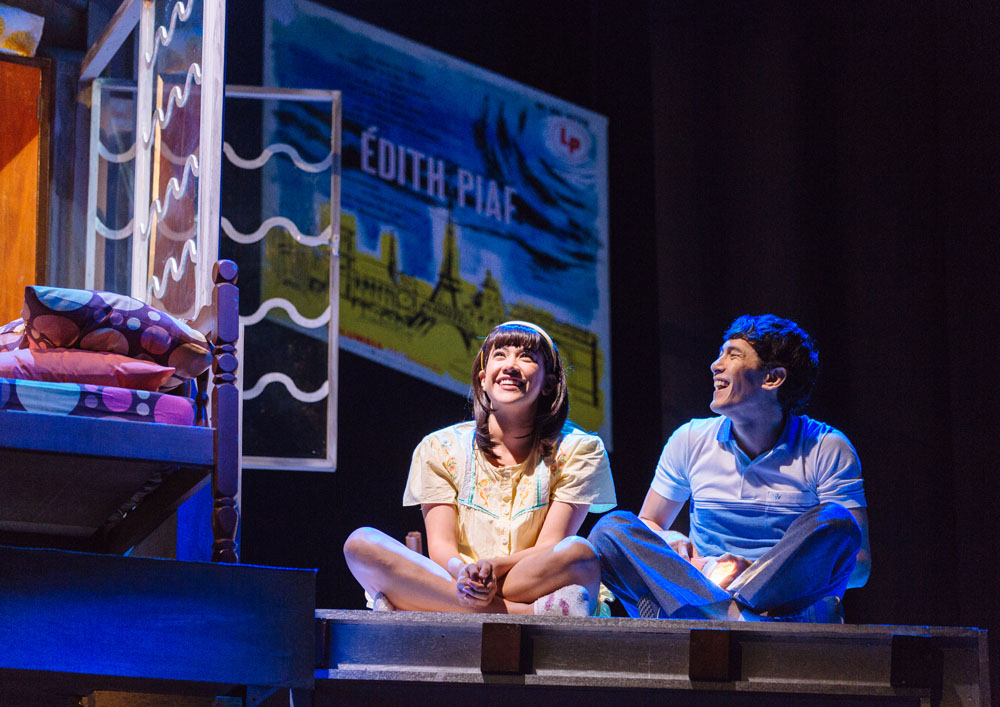