23 Feb 2017
Article by Sam Kee
Photos by Jack Yam, Courtesy of Esplanade - Theatres on the Bay 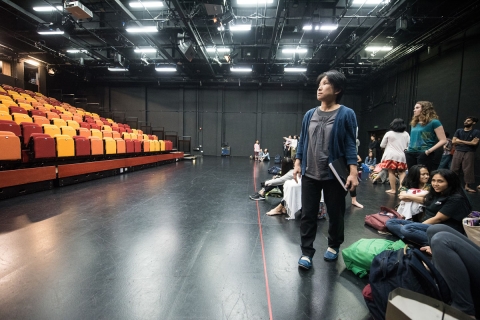 When Peter Handke wrote Offending the Audience, he admitted that it is ironic to have to use “theatre to protest against the theatre of the moment”. We look at Offending in the context of negation: taking the play out of the play to create an awareness about theatre. In the same slant, director Liu Xiaoyi exploits the 'audience' as a subject to confront the audience. 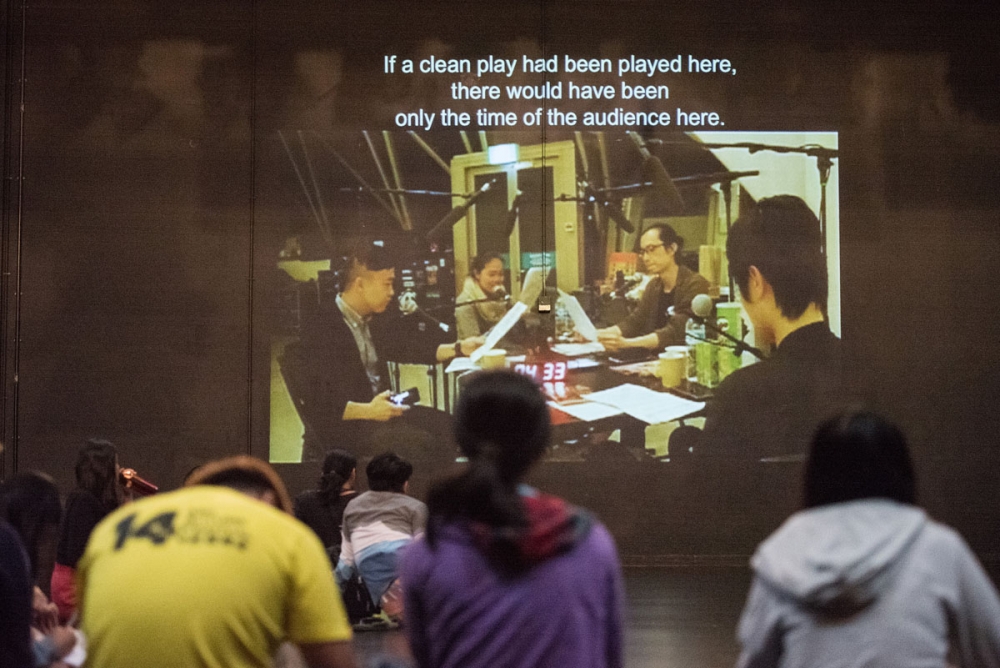 True to the disclaimers about the denial of a play, we do not immediately see any. We hear the cast's conversations with the director being broadcast over the sound system in real time, including surtitles that are typed spontaneously.

The first 'happening' that we see is the backstage crew pulling out the benches and installing the audience seats. On hindsight, it is quietly phenomenal. Most of us, who are sprawled on the vinyl floor, have to migrate to the remaining half of the theatre space. We are forced to confront the vacant audience seats – absent of audience. Or if you look around, you may see the ones who decide to take the time to run to the toilet, chit-chat or snack, they are also 'absent'.

In the spirit of Peter Handke, who has hoped to bring the audience's awareness to what a play is by trying to pull off a form of "anti-theatre", Liu's rendition of Offending has eloquently materialised the play's tagline "you will see no play." In the original script, Handke has the performers actually try to offend the audience by verbally abusing them (i.e. You jerks, you hoodlums, you scum of the melting pot). It would have been startling in the 1960s, but listening to an onslaught of profanities would have little effect on the 21st century audience, who by now would less likely be disturbed by experimental or alienation gimmicks. Liu has taken the insulting to a deeper psychological level, preserving the essence of Handke's play and created a whole new script whose structure sits atop Handke's play.

Liu's play unveils the mechanism of theatre: showing the audience the process of 'making' this play through the cast's absurd discussions, and literally revealing the structures that makes up the theatre space, thereby fulfilling the motion in Handke's text that “everything we could see with our eyes in this theatre has no other representations of itself”.

40 minutes into the show, the seats are up, but we are still sitting on the floor. Is this an insult? Or the theatre-maker is urging us to rethink our role in theatre? It is interesting to note that we are presently occupying the space that conventionally belongs to the actors – otherwise known as the 'stage'. No one seems to notice though. The crowd is getting noisier with impatience or because they increasingly feel at ease, I cannot tell. Amidst the racket, we see Ang Gey Pin weaving cautiously through the crowd, clearing a narrow path for herself. She clumsily summarises the 'play', criticises the ridiculous conversations that took place over the sound system, which were not put into action anyhow. She speaks on 'behalf of the audience'. She reasserts her status as an 'audience' by explaining that she has been sitting here all the while 'watching' the play. She claims that she is 'on the side of the audience', and empathizes with us because she does not agree with what the director and her fellow cast are doing. Here you go – I present to you the offended audience member. 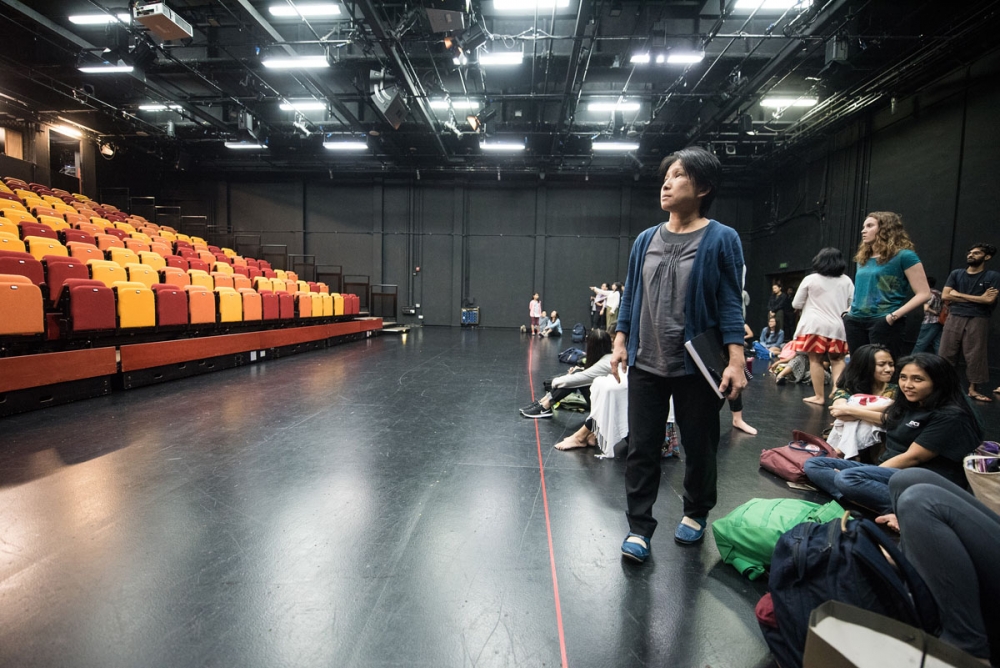 Coincidentally, Ang is the only cast who seems to be acting, made apparent by her deliberately archaic and stiff movements, and her over-the-top outbursts. This falls in line with the accusations that Handke wrote against the audience: “You were born actors/Play-acting was in your blood/You are accomplished actors/You ivory-tower artists”.

At long last, we are motioned to take the seats. The play has come to an end, and it is announced that a post-show dialogue will follow. When the lights went out, two bright green 'EXIT' signs on either side of the room aptly announces the end of the show. There is a buzz in the crowd, people genuinely look like they want to ask questions. Well, the joke is on us – here comes the insult to the privilege of being an audience. We hear pre-recorded canned questions being 'asked' over the sound system, with silent pauses for you to complete their sentences arbitrarily. In the original script, the curtain falls after the audience starts leaving in the midst of roaring taped applauses and canned reactions. In this rendition, it is a brilliant move by the director to include the fictitious post-show dialogue as a finishing touch. 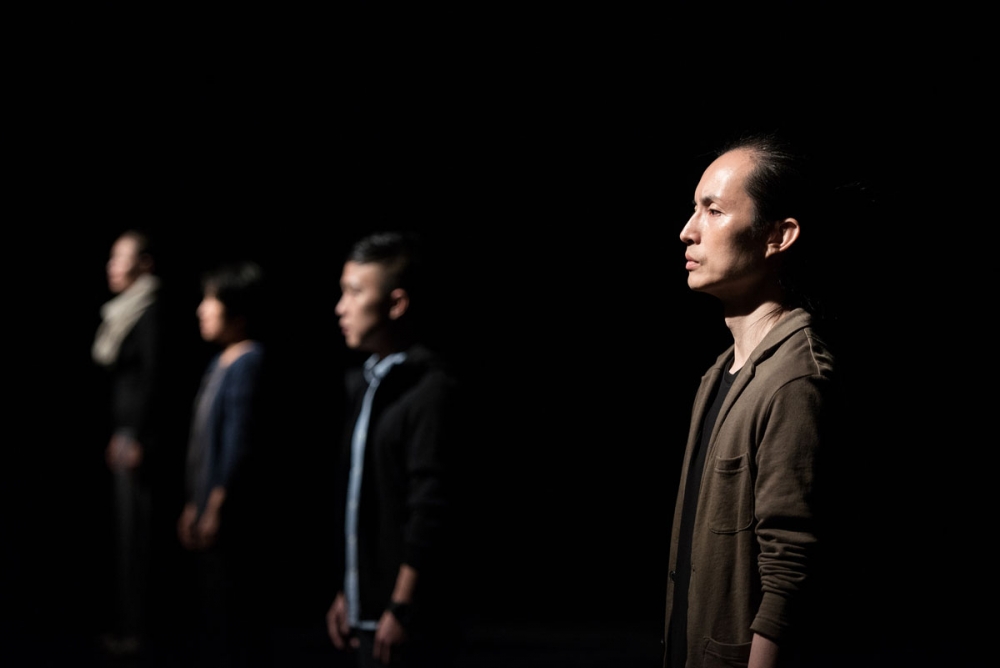 Liu has expanded upon Handke's use of paradox in the play by having an audience who is unable to successfully carry out its role as an audience – there is no play to be watched, and we are not occupying the audience seats. The stripping away of the conventional definitions of an audience is further accentuated by the empty audience seats. And the identity is challenged again by an actor who claims that she embodies the traits of an audience.

Liu has updated Handke's script pass the expectation of the original script written in the 1960s that was in response to the state of bourgeoisie in the theatre scene. He has created a spectacle without pictures in response to the normalcy of the passive audience.

About Emergency Stairs
Emergency Stairs is a yet-to-be-formed nonprofit, intercultural, experimental theatre company in Singapore. They believe that theatre is revolutionary, revolution is experimental, and experimentation is subversive. Theatre continually destructs and constructs our perceptions towards art, life and the world. Time, space and body are the basic elements of this revolution. They will approach intercultural dialogue openly, deconstruct the works of our predecessors boldly, and reconstruct the theatre of the future confidently.

Offending the Audience is their debut production.