[Review] Checking into a new medium 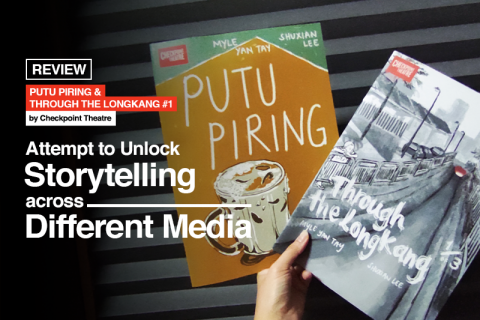 I must say I was quite surprised to receive a hardcopy literature from Checkpoint Theatre. I thought, is this a foray into alternative storytelling in response to the new normal of Covid-19? As much as I scorn the trending term ‘new normal’, one cannot deny that the abruptness, with which the pandemic hit us, did catalyse some necessary changes and made pronounce urgent issues that can no longer be ignored.

Flipping open the booklets, I find Checkpoint’s statement on the imprint page:

Checkpoint Theatre, founded in 2002, is a company of multi-disciplinary storytellers.
We focus on creating and presenting original Singapore content with strong writing, performances and direction, across different media, disciplines and platforms.

Is this an attempt by Checkpoint to unlock ‘storytelling’ across different media to rediscover it? The rise in graphic novel and visual literacy (see graphic novel Sabrina – first graphic novel to be longlisted for the Booker Prize in 2018) prompts me to look at visual direction being captured within the frames of fleeting strokes and organic lines in Checkpoint’s Putu Piring and Through the Longkang. I am also slightly unnerved by the fact that both books are sized and saddle-stitched in a way similar to a production programme booklet. It seems to mock my memory of watching theatre in-person, which leads to a tinge of sadness. The booklets do bring back some sense of familiarity though – the anticipation of hoping to find a good story, and waiting to be touched…

Putu Piring
On first read, Putu Piring seems to lament the loss of a traditional craftmanship of making this traditional ‘steamed cake’ made of rice flour, filled with gula melaka (palm sugar), and sprinkled with grated coconut shavings. The process of steaming these delicate pieces of ‘cakes’ has fascinated me as a child when I encounter them at the occasional pasar malam (night markets). I was enthralled by how fast the auntie’s pair of hands worked to get the metal moulds filled, flipped, covered and opened to a rhythm of clink-clanks, tending to several conical moulds at the same time.

The swiftness and precision of the craft seems to be aptly translated into the brush strokes in the illustrations. Illustrator Lee Shuxian’s choice of short tapered strokes, and a neutral, earthy palette, bring out a sense of poignancy – perhaps out of guilt, remorse or nostalgia. The colour palette is also reminiscent of a flurry of putu pirings being made – the greens of petite squares of banana leaf, the browns and gold accents of the gula melaka filling, the whiteness of the steamed rice flour.

I read the story several times more, twice over supper with my younger colleagues. Unlike reading a novel, illustrations in a graphic novel tend to pull you in to read it again. Each time, small details that you never noticed before jumps out to capture your attention. We pause and pore over a spread, trying to figure out something different from the last read:

Who does the young protagonist want to see again? The boar, his grandfather, or himself?
Was he resisting/trying to break free from a certain inherited baggage of traditions or culture?

Some of us thought that the ‘boar’ might symbolise his grandfather, someone he could not bring himself to understand until it was too late. Some of us thought that it was just the protagonist’s regret for the demise of his childhood and the reality of adulting. But we all agree that in the end that, whether it was a lost kin, lost childhood, lost heritage, the protagonist came to terms with himself eventually. And we are happy for him.

Through the Longkang [Part 1 of 3]
Through the Longkang seems a bit more colloquial than Putu Piring. Short outbursts in speech bubbles, and the use of colloquial ‘lah’ and ‘then?’ set an impatient mood for the story and quickens the pace. The dialogues, peppered with more questions than answers, and incomplete sentences work to build suspense, compelling a potentially thrilling encounter.

In this title, illustrator Lee Shuxian uses bold, dramatic charcoal strokes to outline silhouettes, shading in the darkness of the night that falls on objects. The duotone of black and red effectively brings out an intense, eerie sensation. Patches of sketchy charcoal on paper lends a rough, foggy impression to these ‘premonitions’ or ‘flashbacks’.

Earlier, I had opened the book near midnight, and quickly closing it upon spotting the horror theme. I set it aside for the night (I have a low threshold for horror – My last horror movie was Dark Waters in 2002.) But one can’t deny a certain mysterious charm surrounding frightful stories that continues to beckon despite one’s fear. I suppose this is also what the young protagonist feels when he encountered the dark mansion in the story – to be drawn in unwittingly.

This is just the first instalment of the series Through the Longkang. But I’m not sure if I have the courage to find out what happened to the boy in the next episode…

Putu Piring and Through the Longkang #1 are now available here.