Our Credo – SPCCPS in concert with Mark Hayes 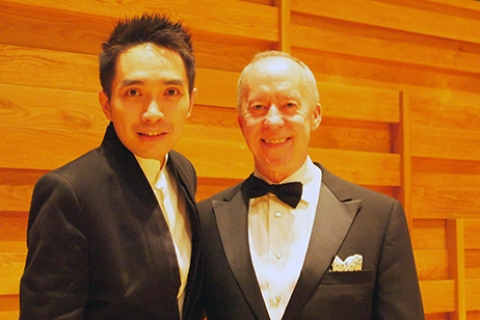 If there is an evening that bears testament to young people’s commitment to and passion for music, this was it. Tonight’s concert brought together primary school students in a performance of diverse repertoire that culminated in Mark Hayes’ uplifting choral and orchestral work.

The SPCCPS orchestra started the evening exuberantly with Leroy Anderson’s whimsical Fiddle Faddle. Steinway Artist Warren Lee took to the piano for the exquisite Andante from Shostakovich’s Piano Concerto No. 2 though the orchestra was mired in uneven pitching. Nonetheless the orchestra warmed up and excelled in Dvorak’s folk-ish Bagatelle Op. 47 No. 5 and the re-arrangement of Beethoven’s Ode to Joy. Music that represents joy, hope and youthfulness suited the spirit of the evening. The first half of the programme closed with a medley of tunes from the musical Les Misérables supported by the orchestra’s commendable brass section played to rousing reception. 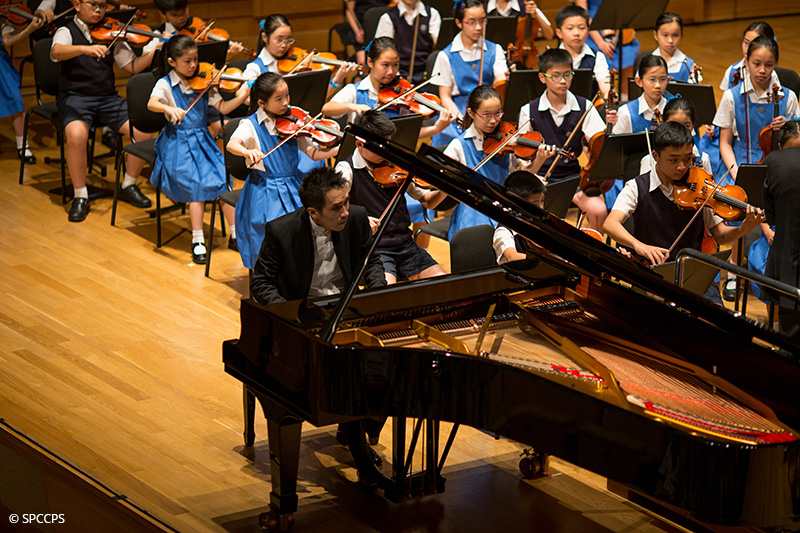 In the second half of the concert, the choirs delighted the audience with choral works of various styles and in no less than 5 languages. Starting off with a popular favourite, I Believe, the SPCCPS senior choir then performed Leroy Anderson’s The Syncopated Clock. Arranged by K Matsushita, the piece ends with a reference to the children’s song My Grandfather’s Clock and a jolly surprise from the performers. Of note are the choir’s lively renditions of two Cantonese songs: Mongolian composer Hugejifu’s work depicts the delights of an imagined summer vacation of stars from the skies; the other by He Chongzhi is an effervescent representation of shopping heaven that could have been staged as part of a Cantonese musical. Also performing were guest choirs from Raffles Girls’ Primary School and the all-boys choir from St Andrew’s Junior School. 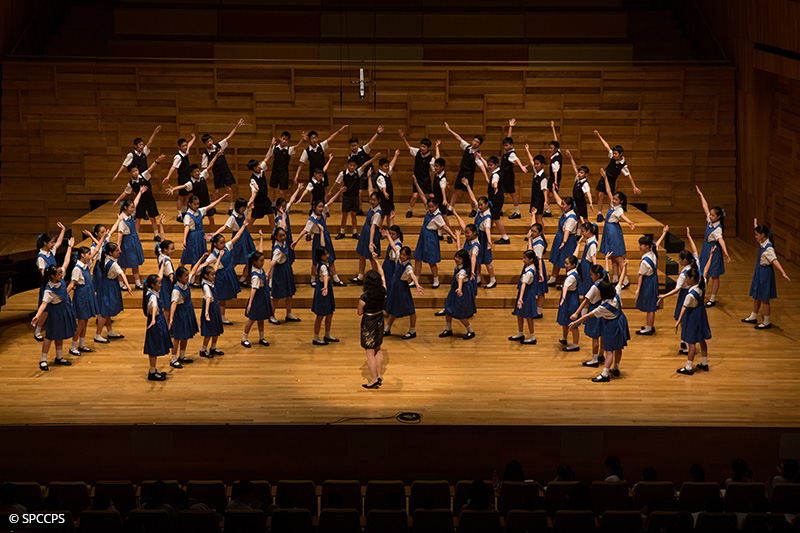 Prolific composer Mark Hayes and Warren Lee took to the stage to perform a couple of Hayes’ piano duets. But the students were the stars of the night when they returned to stage for Hayes’ uplifting choral and orchestral work Credo. As the night came to a close, the unaffected joys and passion of the young musicians were palpable. Kudos to the conductors, teachers and parents for supporting the programmes that make performances like these possible. 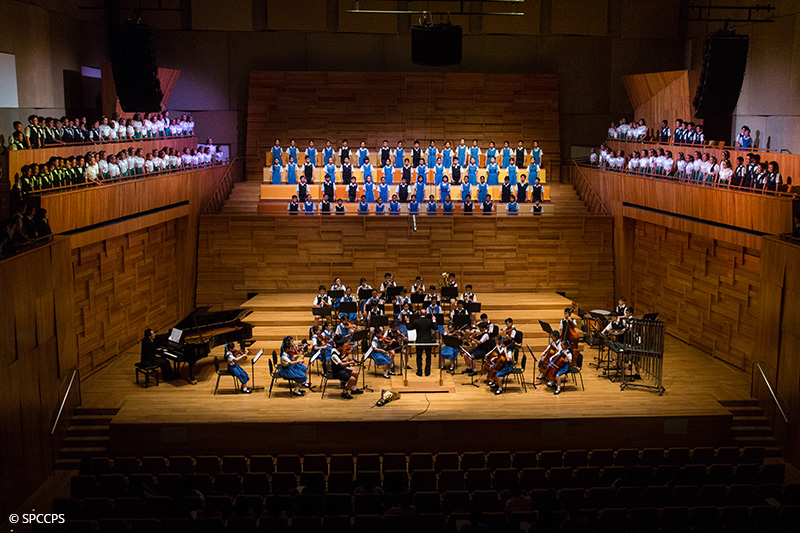 We caught up back stage with prolific music composer, arranger and conductor, Mark Hayes.

Hayes: It was. I was asked to go to London for an international children’s festival middle of 2000. There were 100 singers in Canterbury Cathedral in Canterbury, England. These were children from the US who had come over and I got to conduct them. We did the same thing with them again in London with orchestra. The first time was with organ, and again it was amazing to hear that done in that setting. Regarding Credo, I don’t have children of my own but I had really strong ideas about what children should sing and how they should feel about themselves so I tried to write a piece that was very positive. That talked about how their whole life was ahead of them: they could be positivity, they could be imagination, they could be determination. And I wrote the lyrics in “I” state, so like I am this, as opposed to someday I hope to be this… to put that in their mind. But also in talking about how unique and special they were, the last line is always I am a servant. So with the incredible creativity [and potential] that they have, there is also the responsibility to be a servant to the world. So that was my chance to say what I wanted to through a child’s grace.

Q: And with that there was the message that you wanted children to be the best that they could be through music?

Q: You have a statement: To create beautiful music for the world – it’s an amazing statement. And you yourself draw your music inspiration from a variety of influences: pop, jazz, classical, gospel etc. To go back to the beginning, what event or who first inspired you to explore the world of music?

Hayes: It was when I was 10 years old, I started piano lessons. The school I went to had a band program where you can start band instruments when you are 3rd grade or so. My parents said we’ll either pay for band lessons or piano lessons and you get to choose. So I chose piano and ended up playing bassoon later on. But piano was my first love. When I was 13, I started playing at my church. So it was like having a concert every week where you had to play in front of people and be prepared and all that. So I just grew up loving, loving music in that way and studied it in college; I was a piano performance major. And then I began starting to create things in college, started to write things down and arranging and composing then. But it started out when I learned to play the piano. My very first teacher taught me how to improvise. I was a reader: I knew music theory and classical music. But I also learned how to improvise which is the foundation of all things that I have done since then. I know that in Hong Kong and probably here, children start [learning music] really early, like when they are 3 or 4 or 5, so 10 is pretty late. But it was the right time for me.

Hayes: It’s extremely diverse in the United States. There are huge influences like Broadway musicals and pop. There are several TV shows right now, for instance the show Glee that popularised the idea of singing in a choir; before that it wasn’t so cool and now it’s very cool. And now they have talent shows like a cappella sing-offs where people sing in a cappella groups, some of it is rap music, some of it is harmonious and traditional in nature, but it’s got [into] the pop culture and people who don’t know music are watching things like that. So I think that’s really great. Unfortunately some of the music programmes in schools in the US have not been funded it’s not always [the case that] kids grow up knowing music in every state. But there are still many states like Texas, Wyoming and Iowa where choral music is really held up as an important thing. And the high school and colleges are amazing; there are some wonderful concerts. There are [also] community choirs, where people are not part of a church, they are not part of a school, and they just get together to sing. I write a lot of music for them and get to conduct them. So I think it’s still alive and well, very much so. I am aware that when I came to Hong Kong and Singapore, that sometimes the level of excellence here is even higher, than the children in the U.S. But it’s still very much alive. We have the American Choral Directors Association and it continues to grow. So that’s a good sign. 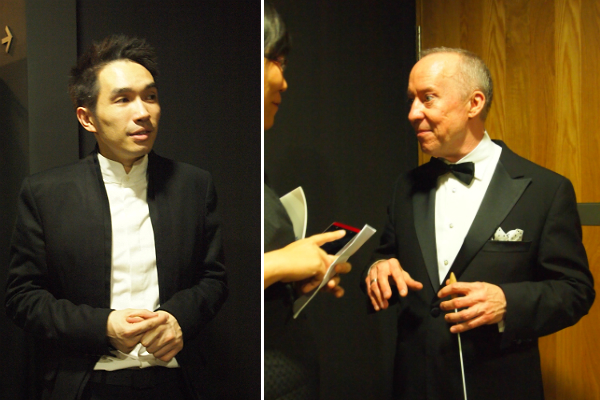 Also performing tonight with the students was Steinway artist Warren Lee. In addition to being a pianist, Lee is a music educator as well as music director at his alma mater, SPCCS. We managed to catch him back stage to chat with him.

Q: As a music educator, what do you think is the biggest challenge today in music education?

Lee: In Hong Kong, and maybe in Singapore as well, the pursuit of examinations, certificates and competition prizes, sometimes overshadows the real meaning of music, which is to perform and make music. I always say that music is a performing art and not a competing art, nor an examining art. But students, parents and teachers nowadays tend to love having a certificate and that is the biggest challenge. Sometimes they will treat a competition and exam very seriously… Sometimes it’s forgotten that music is supposed to be performed and shared. That’s why we take students on tours, to work with other children, other conductors and other composers to have a broad experience of music and not just exams.

Q: How do you balance that need for something tangible, like a certificate or a grade 8 pass, versus the intangible joys of making music?

Lee: You witnessed that tonight right? And I think that every parent in that hall tonight will understand that. That’s why I want to make more opportunity for this. I think it’s a necessary [evil] nowadays to have some competitions and exams. It’s a goal but it’s a wonderful goal. So we are not saying no to all competitions and exams; we need to have something like this. And this will give everyone energy to excel, to be better.

You are an alumni of St Paul’s. And as a pianist you started your career very young. What was the first thing or first person that inspired you?

Lee: My mom. My Mom is a music lover and she didn’t get the opportunity to learn music. So she put a lot of effort in me and my elder sister. So when my sister, who is three years older, was learning piano and I just tagged along. I was paying the most attention. And then one day when I was three years old, I just got up to the piano and played the whole piece that my sister was learning. And that’s how I started.