It is my first time attending theatre with my sister; I am not sure how to prep her and her toddler twins, since it is also my first time attending theatre for babies. I am worried she might see it as just another play session. But my worry is unwarranted. After the performance, I ask if she thinks it was theatre? She quips instantaneously: “Of course! There’s a story, a performance, lights and music. It’s different from those play activities where a facilitator comes around to troubleshoot each and every baby’s challenges, and then leaves.”

I think she has accurately pinned down a defining characteristic of good theatre - its effects lingers in your head and body long after the curtain closes. A good theatre does not try to solve your problem temporarily and then abandons you. One can take away more than that. 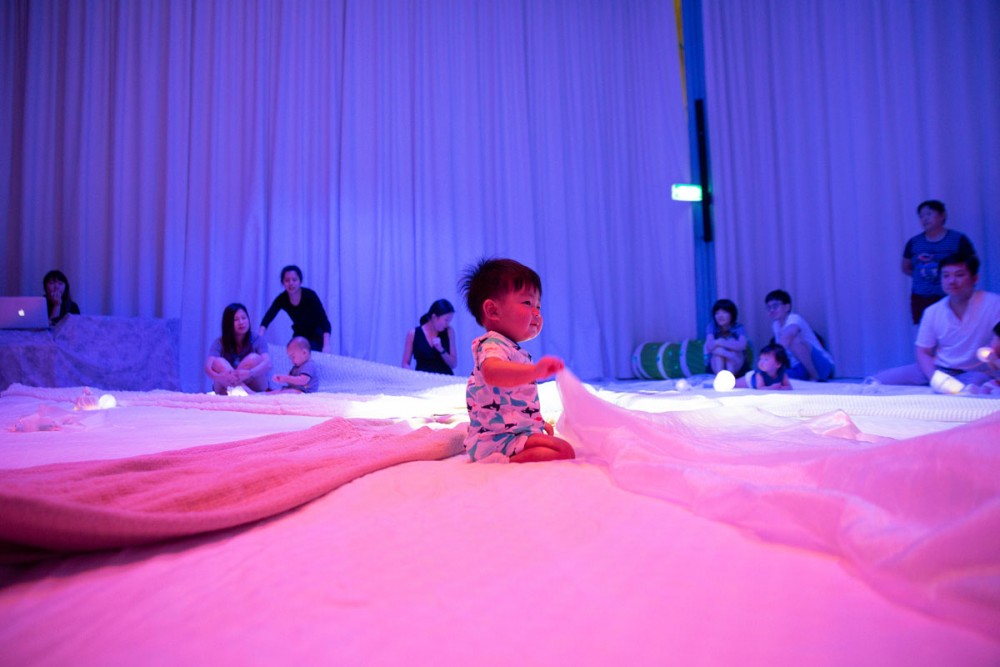 At You Can Reach The Sky by The Wanderlings, the stage is a squarish platform made of soft mattresses. Long drapes of differently textured textiles spread out radially from the centre. If you are looking for a typical children’s story or a plot, there is none. Despite so, I am pleasantly surprised by how easy one can recognise an intro, a climax and a calm, resolute ending in the abstract narrative. The tone and texture of the play starts out to be playful and light-hearted. I like that it is not overwhelmingly colourful nor cartoon-ish, hence exuding a calming and non-threatening feel, welcoming the babies to settle down. Those who got comfortable first, proceed to roll and crawl around on the mattresses as the performers take care to side-step them. As the story progresses into its climax, the music quickens, the lights (by Liu Yong Huay) become a more saturated pink/purple/blue hue, the babies stop what they were doing and become more fixated on the action happening at the centre of the stage.

At the crux of this play, the performers are listening to their audience, providing care and assessing the level of audience’s readiness. In this intimate encounter, the performers have to take the cue from their young audience to decide how close a distance to interact at and how long to linger the props over their heads. The performers take care to listen to the audience’s response to decide the path they’ll walk in the theatre space, weaving in and out of the parent-child pairs, outlining the perimeter of the stage. 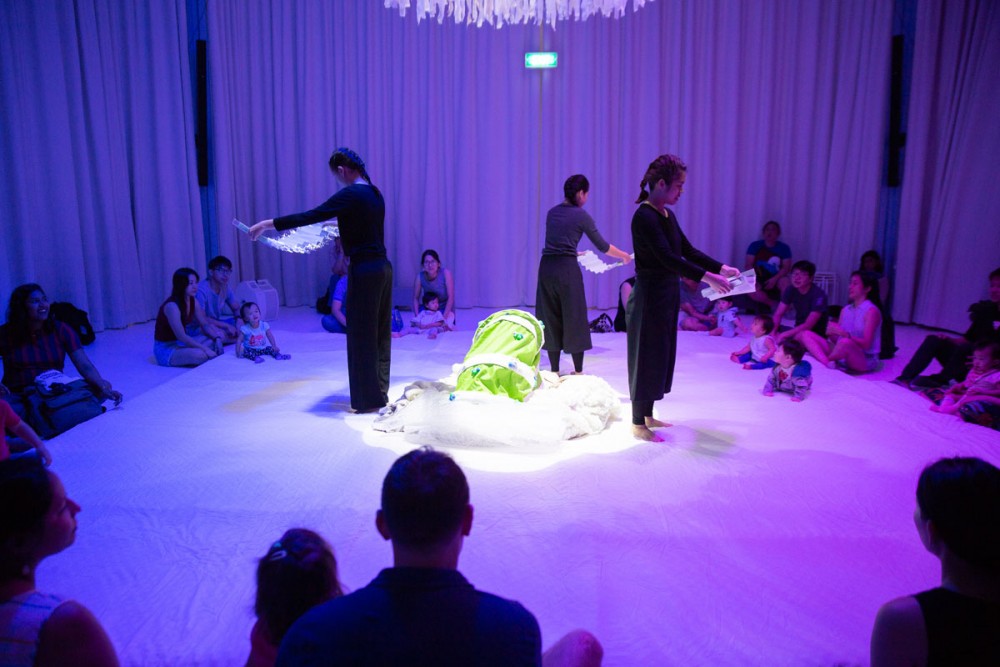 The first point of contact come in the form of wind. At the start of the play, performers (Myra Loke, Liew Jia Yi, Vanessa Toh) hover paper accordions, shaped like pieces of zinc roof plates over the babies’ heads, to caress them and establish their first instance of gentle touch.

Later, Myra walks around with a very interesting prop/character that resembles a jellyfish. It is my favourite prop in the play, made up of plastic containers, light bulbs, linen and a small household plastic rack (the kind with several pegs we use to hang socks or handkerchieves to dry). Myra walks around the theatre space with the jellyfish and begins to unclip small singular units of conical lamps from inside the jellyfish. She looks each child in the eyes, and passes them a lamp each. By now, the performers seem to have built enough rapport and trust with the audience; each child holds out his/her hands to receive the lamps without much fuss or hesitation. My nephew, Gerrard, is obviously happy with a new toy to play with. Later, he would proceed to balance his toy car on the flat face of the conical lamp. The lamp is child-proofed, wrapped in a white linen cloth. Gerrard then tries to balance the lamp on its vertex, but discovers the lamp would fall, along with his grey Monster truck. He seems inspired, and put up a play of his own: he repeatedly places the toy car on the flat face, balances the lamp on its tip, and shouts “Fall down!”. He half releases his hands on the lamp, half throws it, so that the car falls further away each time. He himself pretends to fall backwards along with the lamp. I came to understand that given something familiar and something unfamiliar but non-threatening, it signals to children that it is safe for experimenting and exploration. 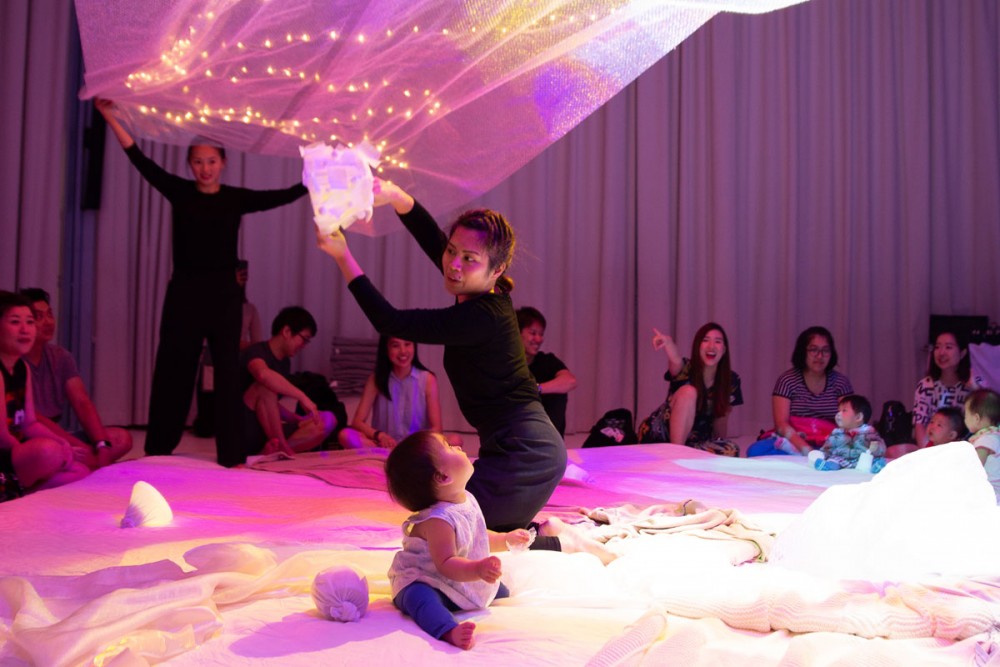 Nearing the end of the play, the performers descend a large plastic sheet with fairy lights upon us, literally bringing the sky down to the audience. The babies, attracted by the lights, reach out to touch the sheet instinctively, and are more encouraged to do so when they realise the sheet crinkles and rustles to their touch.

Is there more to theatre for babies than merely creating an environment where parents and babies can be at ease? Following Beck Juncker’s thoughts on the relations between professional theatre performances and children’s cultural life, I agree that theatre for babies should not simply “serve the pedagogical developmental work in daycare institutions”, nor to “contribute to formal teachings”. I like how The Wanderlings’ work focuses on bringing new experiences to toddlers by expanding their vocabulary of imaginations, and unlock the potential of common household items, in which parents can extend the affect of theatre beyond the show, in their own homes.