The exploration of the mind is not unlike the exploration of (outer) space. The mind, like the deep space, evokes an unfathomable vastness. Because one cannot see the boundaries, there is a sinking feeling that one might just accidentally tip over the edge while feeling your way around. Or perhaps there is no edge, then one is just destined to drift about aimlessly and infinitely in the vastness of his/her own mind-space. The absence of light threatens to swallow you into an abyss, just like how one might drown in one’s relentless thoughts.

Oliver Chong’s A Fiend’s Diary juxtaposes the expansiveness of one’s mindspace against the constraint in a physical space. Consider this ironic idea: Can one be entrapped by an infinite vastness? 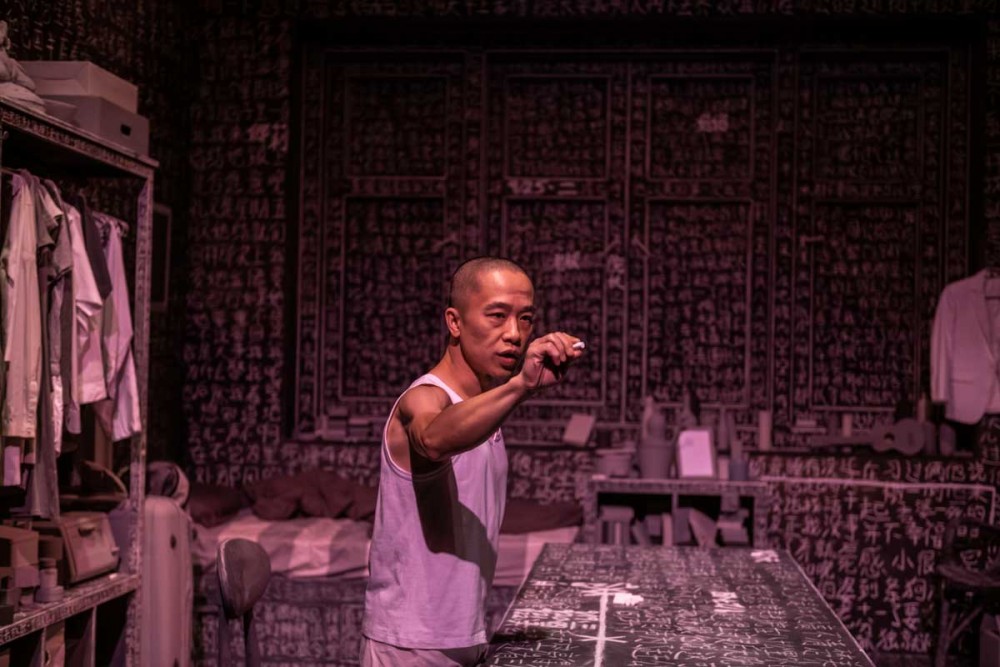 For some time, I find myself staring into the backstage of the set in the black box, where the artificial light has managed to shine through the four windows of one of the walls, casting a shadow minus a neat row of square shapes. It reminds me of the sunset, and somehow accentuates the loneliness and solitude of the space that the protagonist has caged himself in. Perhaps it is not vastness that traps a person, but the awareness that there are more uncertainties in this dark space than known variables. Is that fear?

A few minutes before the lights dim above the audience seats, there is a sound of a metal door swinging shut, signalling a cell being locked up. It is barely audible above the din of the audience waiting for the show to start. Later, a single piano note strikes, and continues to sound at regular intervals. Its rhythm clocks the audience into the fictitious world perched on the solitary pedestal designed by Chong himself. Sound design is helmed by The Finger Players’ long-term associate Darren Ng. In the play, sounds are picked up by local microphones positioned in the pieces of furniture on the set, amplifying the actual sounds of chalk on table, clanking of hangers, wringing of rattan, creaking of chairs and bed when Chong moves about. These sounds add to the illusion of the bedroom that protagonist seems to have been conjured by the protagonist in his solitary confinement. The set is a square room with two walls missing, orientated such that the vertex points towards the audience. We are invited to witness the protagonist’s life as he moves around his limited living space. The voyeuristic gaze seems welcomed as the monologue takes place in the form of diary entries.

We can also see that Chong decides to keep the fourth wall in A Fiend’s Diary, and does not address the audience at all. In an interview with The Straits Times, Chong mentions that he has no wish to ‘entertain’ the audience; he does not want the audience to “sit back, relax and 'enjoy' the show.” I agree there is a fine line between purposeful anti-engagement and disregarding the audience irresponsibly. In this case, a carefully calculated balance between enticing the audience to invest in the protagonist through voyeurism and not pandering to entertaining the audience is made. This is vastly different from Chong’s last monologue, Roots, from 5 years ago, which was described as “disarmingly sincere”, “engagingly charming” and “captivating” as he animatedly narrates his quest to uncover the truth of his ancestry.

At this point, I’ll like to interject with an observation made by late theatre doyen Kuo Pao Kun in 1988 in the The Straits Times:

“...Eastern theatre has been transformed from an organic community event into an alienated consumer item... we now go to the theatre purely to ‘enjoy a good show’... which means that apart from getting ‘entertained’ by ‘entertainers’, we feel in no way related to the players or the other members of the audience. To the contemporary Singaporean, the others’ presence in the theatre is essentially incidental.”

Kuo questions if this lack of relationship is evidence of an alienated modern society. But he insists that the present state of theatre, then, is a cold one, “bounded by a blatantly consumeristic bond.”

In the same vein, I see Chong’s tinkering with the degree of engagement in the play as an effort to “wake the audience up from the merchandising of passivity sustained by media and film”, and also a little heck, the audience members can take whatever they want from the play attributed to their own life experiences. This play is, after all, a play about the relationship between your self and the rest of society.

Our protagonist lives in the world fixated on the physical properties of other things; he emphasises on the descriptions of physical objects like colours, smells, shapes and sounds. He talks about the sweltering heat of the sun, the varying textures of the colour black (of his mother’s coffin, of the tar road, of people’s shirts), and the shape of his lover’s breasts. He offers little explanations for his actions or decisions. Chong uses a relatively monotonous and dispassionate disposition in delivering his lines for most part of the script whilst introducing the protagonist’s day-to-day life to the audience. He hesitates intentionally at parts of his dialogue with others when it concerns caring for others. For example, he pauses when the protagonist proposes to leave all of his late mother’s belongings to Thom, his mother’s fiancé, not out of sympathy nor thoughtfulness, but due to a kind of casual, logical convenience. 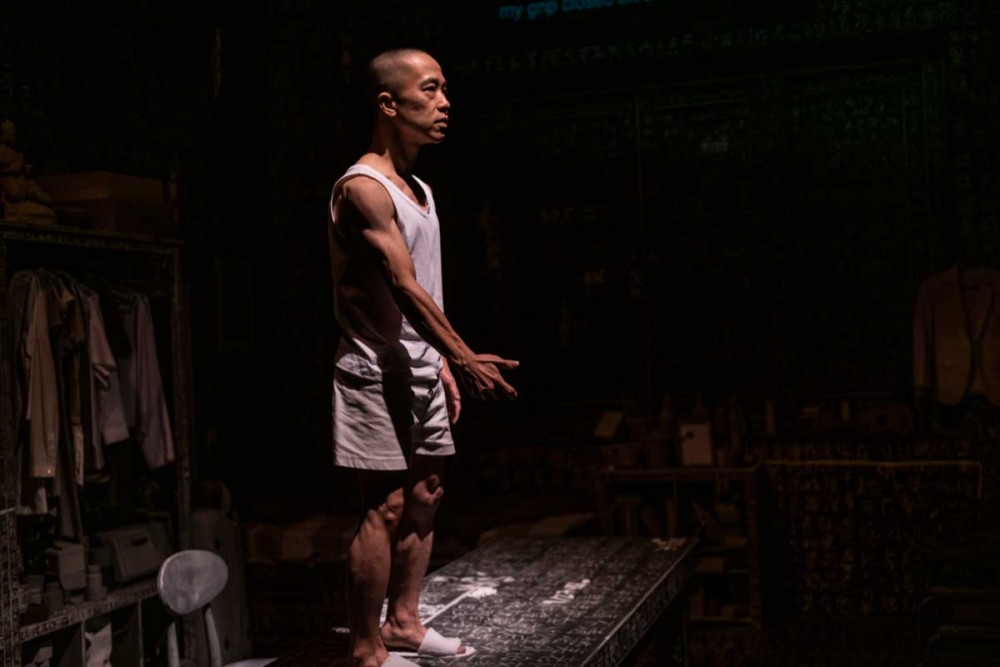 How does one perform or convey indifference on stage? Having attended a few rehearsal runs for A Fiend’s Diary much earlier on, I witness Chong working on the subtlety of his delivery, ranging from monotonous, robotic, emotionless enunciation to mellower, humane, suppressed grief. In the final version, I feel that Chong eventually settles on a slightly mellower tone, enunciating each Chinese character with a little roundedness and intonation. This lends the character a slightly more casual attitude in his disengagement from the world over an uptight one, furthering his careless apathy about what goes on in the world around him.

The watershed in A Fiend’s Diary happens when the protagonist agrees to take the gun from Marcel, his eighty-year-old neighbour who has just lost his sole companionship - a spaniel. That is the first time the protagonist shows empathy for another human being, thereby grounding him and establishing a link between him and the world, in contrary to the way he went around the world apathetically prior to this incident. I interpret this moment in Chong’s story as the turning point for the protagonist’s life, thereafter, a series of unfortunate events befall him.

Prior to the protagonist accepting the gun, his relationships with others have been incidental. We see that most evidently in his reply to his lover: Yes, he probably could marry any other girl with whom he has a similar romantic relationship and if she so proposes. We see he treats others according to his own desires without feeling a sense of obligation or loyalty towards them. It seems that Chong’s play intend to present a kind of apathy and indifference in the way the protagonist treats the world, and vice versa.

At the climax when the protagonist broke, all the creaking sounds of the furniture come together like nerves wrung too tight, which evokes the turmoil I imagine is gruelling the protagonist. By this time, Chong has already climbed up the table, his body, taut, as he raises his arm stiffly with the rising temperature he describes. I get dizzy concentrating on his words, dished out like cold, hard bullets, then a deafening gunshot broke the silence in the theatre. Chong’s fingers curve so slightly, stating in passive voice that the trigger was pulled, as if the action is removed from his physique.

Here we see Chong’s protagonist cold-bloodedly fires 5 rounds at a 6-year-old girl who cuts his queue while waiting for a bus, thereby ironically establishing a connection with the world he so disregards. In his words, he “knocked on the door of misery”, which I interpret as he has brought the consequential tribulations upon himself. I think of Chong’s words in the program booklet: “Perhaps it all just comes down to the meaning one makes of one’s suffering.” Can one rebel against the indifference of life by actively defining it and assigning a meaning to one’s suffering?

Some audience members that I spoke to afterwards, admit to accidentally dozing off for a bit before being woken up by the resounding gunshots, about midway through the play. It seems important that everyone is awake and in time for the second half of the play — the trial. But to me, the trial is merely an exemplary display of Sartre’s famous philosophical observation that existence precedes essence, where we see the protagonist(’s soul) gets solely defined by his actions, or the lack of. The act is given a slightly more humorous treatment than the rest of the play, perhaps to signal the ridiculous absurdity in rationalising the irrationality. But I could not be interested, maybe because I feel the debate is baseless and meaningless. 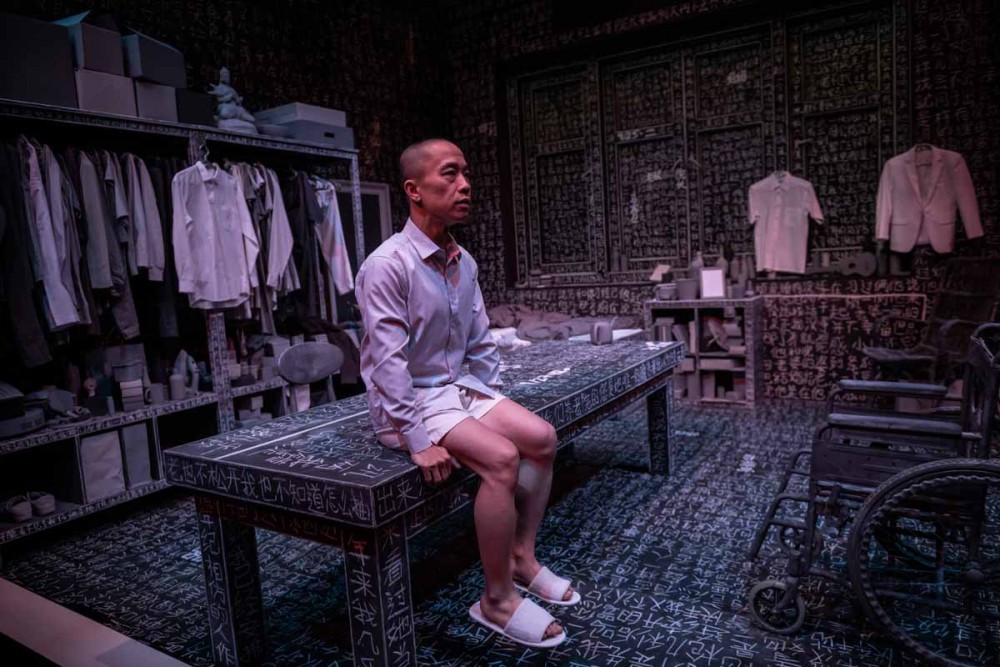 We can see that in the last scene where the protagonist lies down on the imaginary(?) table looking at the “dark sky spangled with stars”, he manages to let go and once again showed empathy for someone else — his mother. The protagonist claims that he now understands why his Mother would choose to live her life (and perhaps agony) again being engaged to a lover when she is already dying. By now, Chong is almost done with putting on his clothes. I see this process as a symbolic representation of his readiness to face his mother’s death, and perhaps even his own.

Chong’s protagonist leaves behind a puzzling sentence that I cannot brush off at the end of each rehearsal and the performance. He says “I was happy once, and now I’m happy again”. Perhaps implying that one could be happy being unaware and live by his own desires and standards. But one can also be happy after being made aware of life’s sufferings and society’s impeachment. In the story, the protagonist realises the meaning of life through agony and verifies the certainty that he lives, he makes peace. I choose to believe that the protagonist comes to accept the consequences of empathy, and the benign indifference of the world bearing witness to his actions. And the endless loops of this play are perhaps the futile cycles of self-doubt and affirmation that become director Oliver Chong’s coping mechanism for dealing with life and death.