SIAO CHAR BORS Comedy, your favourite women & queer-friendly comedy open mic night is back on stage with a vengeance! Now at the Hive!

Featuring an exciting range of some of the funniest open micers on the scene and the absolutely hilarious international award winning comic & the funniest/filthiest ukelele player you'll ever meet HANNAN AZLAN:

Hannan Azlan is Malaysia's comedy sweetheart.
Some of Hannan's flexes include:
• Been featured on Comedy Central Asia, MTV Asia, and ABC (Australia).
• The youngest winner of the Hong Kong International Comedy Festival, as well as the first and only AFAB winner in the competition's history.
• Sponsored by the Singapore Fringe 2016 and the Melbourne International Comedy Festival 2018
• Charmed audiences across Asia, Australia, "Great" Britain, and Europe.

A multidisciplinary artist at heart, Hannan has a background in theatre, music, and childhood depression. 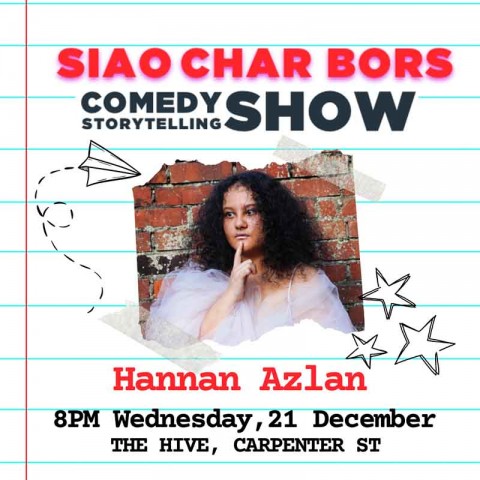