Billed as "shaping the future of A.I." by CNN, Holly Herndon navigates the nexus of technological evolution and musical catharsis through elevated live performances with her vocal ensemble.

One of the most intelligent, disruptive musical voices of our age, experimental musician Holly Herndon dazzles in her first concert in Asia at SIFA 2022.

Operating at the edge of electronic and avant-garde pop music, Holly Herndon's work involves augmentation of her voice and image, facilitated by critical research in Artificial Intelligence and decentralised infrastructure.

On her most recent full-length album, PROTO (released in 2019), Herndon fronts and conducts an electronic pop choir, comprised of both human and A.I. voices, over a musical palette that encompasses everything from synths to Sacred Harp stylings.

PROTO is a thrilling engagement with one of today's greatest cultural shifts – the "protocol era" – where rapidly surfacing ideological battles over the future of A.I. protocols, centralised and decentralised internet protocols, and personal and political protocols are emerging.

The sounds synthesised on stage by Herndon, her A.I. "baby" Spawn, and the ensemble combine elements from Herndon's dynamic and idiosyncratic personal journey: the timeless folk traditions of her childhood experiences in church-going East Tennessee (particularly the prismatic layered practice of Sacred Harp singing); the avant-garde music she explored while at Mills College; and the radical club culture of Berlin; all enhanced by her recent PhD composition studies researching machine learning and music.

Euphoric, dynamic and eye-opening, Holly Herndon: PROTO promises to be an exhilarating concert from a musician at the forefront of today's technological revolutions. 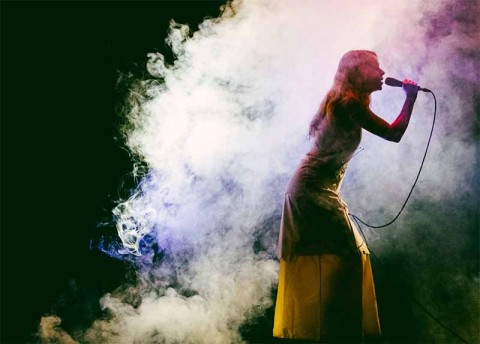