Cuturi Gallery is delighted to present Crooners, a solo exhibition by Singaporean artist Faris Heizer (b. 1998, Singapore). In this new series of works, Heizer spotlights the familiar figure of the salaried professional in his intimate moments that often go unnoticed or overlooked in the public eye. Spanning scenes of a white-collar world after dusk, Heizer continues his sustained investigation into the social organisation of our contemporary society.

A play on our affective registers, Crooners gives form to the lower frequencies underscored in the everyday life of the white-collar worker. It follows Heizer's negotiation with the portrayal of masculinity and its affinities with capitalism, epitomised by the salaryman. Here, his figures are captured in unguarded intervals of vulnerability and obliviousness—mid-conversation with friends; people-watching in a bar; or sprawled out after a night of one too many.

Beginning with a thinly primed canvas, Heizer stains its surface with acrylic inks to create varied layered undertones toward informing his figurative compositions. A monumental piece, A Man's Bland Ballad (2021) is set against a blurred sunset, with its horizon bleeding into a field of billowing grass. Heizer foregrounds an interaction between two male figures—one sitting on a bench, with the other crouched to the ground and head sinking into the former's lap. As suggested by its title, the scene depicts the huddled figure recounting the same old story to his friend, whose tilted head reveals his blasé attitude, preferring to tuck away on his sandwich instead of listening attentively. Accordingly, Heizer's perceptive choice to stage the scene from a wide-eye angle perspective then takes on a double fold purpose, where the distortion of viewpoint not only lends to the exaggeration of the story being narrated, but also re-orients the passive viewer scrutinizing the scene into an active listener of sorts.

At the center of this body of work and namesake of the exhibition, Crooners (2021) spotlights two figures hunched over a rail, overlooking a field of lilac tubular flowers. In the foreground, a despondent male figure smokes a cigarette; his low-spirited disposition modelled in a sanguine posture, enveloped in an unbuttoned dress shirt. Following a long day at work, he appears to be confiding in his friend, who is seen glancing worryingly at his watch, as though perplexed and unsure of how to react to this emotional outpouring.

Such melancholic sentiments are echoed in The Last Straw (2021), where a male figure lounges on a row of tiled steps. Clad in a crinkled dress shirt and trousers, he sports a pair of striking blue trainers to complete, perhaps an iconic nod to National Service, a familiar rite of passage for every Singaporean man. Highlighted under the faint glow of a streetlight, a faint drizzle augments his sense of desolation, one that seemingly escapes the couple locked in a passionate embrace nearby. An extra cigarette falls to the ground as the figure flippantly flicks out a cig from its pack. Here, the cigarette serves as a recurring motif that Heizer employs throughout this body of work, alluding to a form of escapism; a momentary pause in the undulating pace of everyday routine as seen in Marooned (2021) and Why Worry? (2021).

Through this series of works, Heizer tunes to the quiet; the soft; and the mellow, amplifying the mundane moments nestled in between the relentless rhythms of urban life. 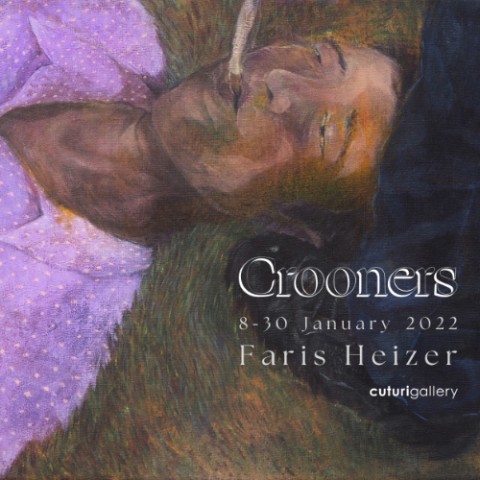