"A fascinating and purposeful piece of theatre that's full of humanity for its subjects. "
—The Reviews Hub

"Tragedy, love, hope ... but also laughs - there are moments of high comedy amidst the poignance."
—HuffPost

Borderline is a satirical look at "The Jungle"— the unofficial refugee and migrant encampment in Calais, France – that was home to up to 10,000 people before its dismantlement by the French authorities in October 2016.

Directed by Sophie Besse, the tragicomedy is devised and performed by an ensemble of refugee and European performers. Tired of the negative perception of refugees and their personal tragedies, the team used humour as a tool to rewrite their narrative, to take you on a funny and poignant journey through their interactions with fellow refugees, well-meaning aid workers, human traffickers, and bureaucrats.

After premiering in London in November 2016, Borderline toured internationally to Germany, Switzerland, Denmark, and India, before the pandemic struck. The Fringe is proud to present the premiere of the digital version filmed in October 2021. 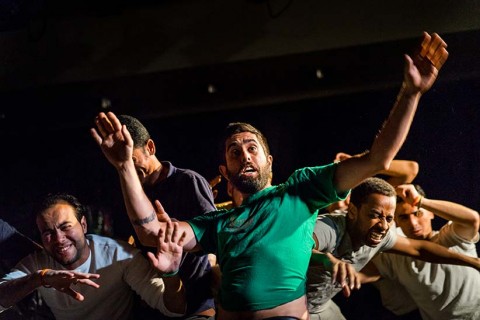