Spoken in English and sung in its original language, be greatly entertained by our interpretation and funny insertions of the two operas!

What would you do if you had to write an opera in four days? In Salieri's Prima la musica e poi le parole ("First the music and then the words"), set in 1780s Vienna, the Maestro wants the Poet to set text to existing music he had already composed (hence the title), to the Poet's protest. However, the battle between Maestro and Poet is just the warm up. The two men then audition sopranos, Eleonora and Tonina who demonstrate dramatic prowess and versatility with their respective arias; to the audience of both men providing comedic effects along the way. Sparks fly when the two sopranos meet for the first time, each wanting to perform a newly composed aria...and they both want to go first.

In the modern adaptation of Mozart's Der Schauspieldirektor "The Impresario", two sopranos (once again!) Madame Herz and Mademoiselle Silberklang, battle it out over high notes to be the prima donna of the Impresario's new opera company. The tenor Vogelsang (hmm tenor...) intervenes but would it make things better or worse?

Both works were initially performed at a competition held in 1786 at the Schönbrunn Palace in Vienna. It is the evergreen battle between the sopranos, between Mozart and Salieri, between period and modern productions, but this time, you decide who wins. 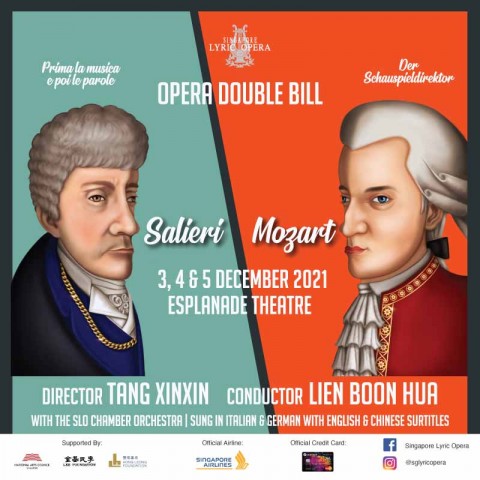