Organised by: T:>Works
Performed by: Ho Rui An

After a successful inaugural keynote in May 2021 by PerForm fellow Shubigi Rao, T:>Works' PerForm returns with a second fellow, artist and writer Ho Rui An. He will deliver a two-part programme beginning with a digital keynote, From Crisis to Value*. The keynote draws from his in-situ research in multiple Asian countries investigating the effects of globalism on Asian financial capitals. Following the keynote is a video installation of his Asia the Unmiraculous which opens in artspace 72-13, Singapore.

Digital Keynote
From Crisis to Value*

In the digital keynote From Crisis to Value*, Ho discusses his recent and ongoing bodies of work exploring the material networks and geopolitical imaginaries that have animated the regions of East and Southeast Asia. He will guide us through his research trajectory that began with his investigation of the so-called Asian financial crisis of the late nineties, to the political economy of post-reform China, and is now focused on the impact of the pandemic and the new socioeconomic realities it presents us with. Spanning the mediums of performance, film, and installation, the works produced from this research have variously examined the relationship between race and financial capitalism, the student as a figure of capitalist modernity and radical culture, the displacement of class politics by a discourse of anti-corruption amidst the systemic crises of late capitalism, and, most recently, the textile industry and its many afterlives within the Greater China region. 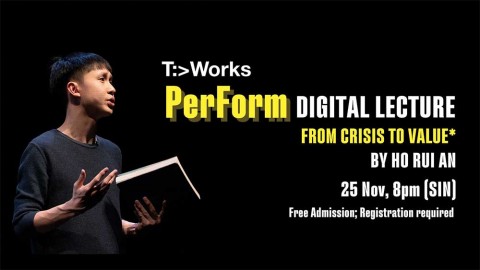