Organised by: Esplanade - Theatres on the Bay
Performed by: Sab of Main Tulis Group (Singapore)

Got a question about playwriting? Have a play inside you but struggling to put it on the page?

Aimed at beginner and intermediate writers interested in playwriting, this two- hour workshop features a brief introduction to a variety of plays across different genres. From William Shakespeare to Samuel Beckett, and Henrik Ibsen to Cake Theatre, we'll take a look at the defining characteristics of a conventional play, as well as some plays that don't fit the mould.

The workshop also includes a Q&A with the facilitator. Participants are encouraged to come with questions. It is not necessary to come with a script of your own for feedback.

About Sab
Sab (they/them) is a freelance writer. A recipient of both the National Arts Council Arts Scholarship as well as the Singapore Unbound Fellowship, their work has been performed in Singapore, London and Perth. Notable credits include two M1 Fringe Festival Singapore plays,– Bi(cara) (2016) and Under My Skin (2017), as well as Coming, Going (2017), performed as part of London-based Bunker Theatre's microfestival, Bunker without Borders.

Sab is a member of Main Tulis Group, Singapore's first playwright collective focusing on English and Malay texts. As part of their practice, Sab is committed to championing the voices of the minority and is also interested in finding new ways to tell old stories. 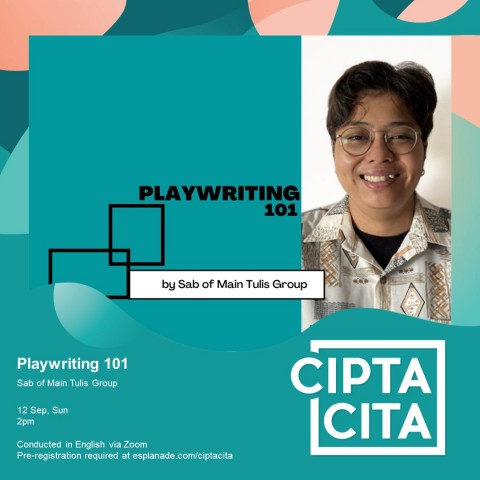