Organised by: Esplanade - Theatres on the Bay
Performed by: Lavanya Balachandran and Shruti Anand

Carnatic vocalists Lavanya Balachandran and Shruti Anand present compositions performed and popularized in the Tamil films of yesteryear. Featuring songs such as Amba manam kanindhu (1943), Krishna mukunda murare (1944) and the iconic Kaatrinile varum geetham (1945), this unique music presentation focuses on the music from films, featuring two established vocalists who have performed regularly both locally and in India.

The music of Indian films has been heavily influenced by Indian classical music, particularly through its ideologies. This is especially true of carnatic music, which influenced the form and structure of early film music, and continues to do so in present times. Fresh out of the Raga Carnatic Music Mentorship with Dr Rajkumar Bharathi, Lavanya Balachandran and Shruti Anand put the spotlight on this genre of music and its essence. They will be joined by T Ramanan on the mridangam, Nellai N Ravindran on the violin, Lazar T. Sebastine on the keyboards and Kumaran Sinniah on the tabla. 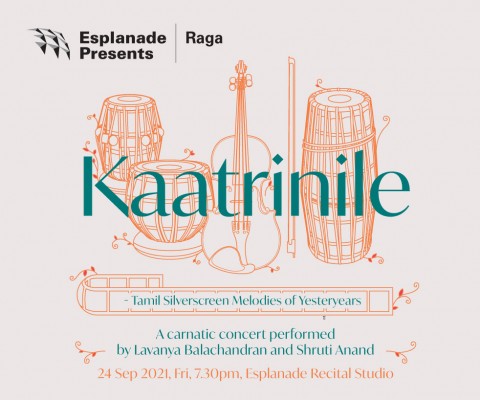