'Teahouse Theatre' is the effort of the Tampines Central Community Arts & Culture Club (CACC) and this programme will showcase a unique dimension of Chinese culture where traditional art of tea drinking is blended with performing arts.

'Teahouse Theatre', or in Mandarin 茶馆剧场, is set in a traditional tea house where the online audience can imagine themselves as customers enjoying tea as they watch staged musical performances.

As in the yesterdays of such traditional tea houses, 'Teahouse Theatre' will help the audience understand the intrinsic value of arts and culture, combined with a greater understanding of tea-making. Blended with this traditional tea-making is Shanghai jazz, a lively fusion of Chinese folk and American jazz music which originated in Shanghai in the 1920s.

Bringing this initiative to life is tea collector Ma Keow Yuen, who will share the art of traditional tea collecting and drinking. Alongside him will be Singapore jazz vocalist Dawn Wong, best known for her ease in switching between jazz and pop styles, and bridging the two contrasting genres nicely with her own brand of jazz-influenced acoustic pop music.

These two different art forms are being brought together through the PAssionArts initiative, which aims to portray diversity and cohesiveness to creatively showcase the uniqueness of Singapore's community art.

Alvin Yeo, Chairman of Tampines Central CACC, said: "Teahouse Theatre is rooted in the simple idea of combining elements of the food and drink culture with entertainment. Both have rich cultural roots and we took the idea to fuse them together and provide an opportunity for Singaporean artists to deliver varied acts and performances."

The 'Teahouse Theatre' episode can be watched via www.facebook.com/tampinescentralcc/ on 23 January at 7pm – 8pm.

Unlike the previous years', PAssionArts festivals which ran between six to eight weeks, this year's festival, following the theme #HarmoniousArtCity, spans seven months until end January 2021 to extend the reach and touch of this annual initiative. Community Arts & Culture Clubs (CACCs) supported by PAssionArts, have taken a more agile approach to deliver exciting performing and visual arts initiatives under the festival theme of #HarmoniousArtCity. 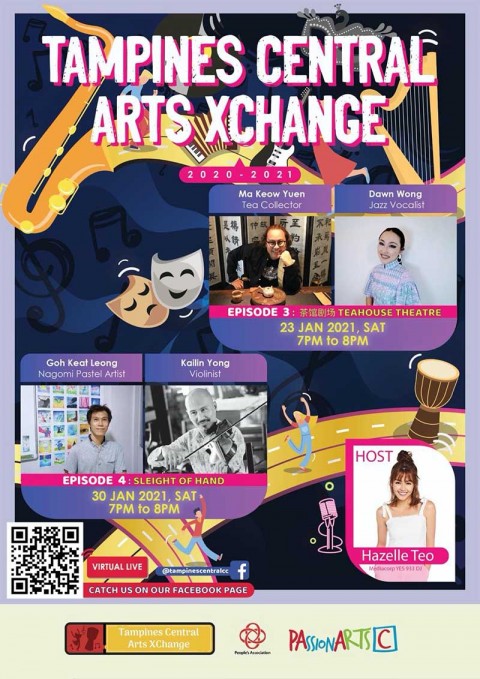