Pipe Up for Christmas!

Join Singaporean musicians Teng Xiang Ting (soprano), Koh Jia Hwei (organ), and Ng Chet Wei (handbells) as they Pipe Up for Christmas! Savour a special selection of Christmas music and welcome the end of the year with hope and gladness. Enjoy familiar tunes such as O Holy Night, Gesù Bambino and The Holy City and be uplifted.


About Teng Xiang Ting
Soprano Teng Xiang Ting is a professional classical singer who formally began her full time education in music after being called to the bar and qualifying as a lawyer in Singapore. In 2014, she embarked on full time further studies in music at the Royal Northern College of Music in Manchester, U.K., where she studied with Mary Plazas and graduated with a Masters of Music Performance (Distinction) and Postgraduate Diploma (Distinction). She then continued her training with Michelle Breedt and Christian Hilz at the Swiss Opera Studio in Biel, Switzerland, where she was offered a scholarship for the 2017-2019 season. In 2012, Xiang Ting made her operatic debut as Adina with New Opera Singapore in their production of Donizetti's L'elisir d'amore. Her performance was noted by The Straits' Times as the 'Best Debut' of 2012. Since then, the roles she has performed include Ilia (Idomeneo, Mozart), Mimi (La Boheme, Puccini), Dido (Dido and Aeneas, Purcell), Papagena and Pamina (Die Zauberflöte, Mozart), Parasha (Mavra, Stravinsky), Rosalinda (Die Fledermaus, J. Strauss), the Governess (Turn of the Screw, Britten), and Eurydice (Orpheus in the Underworld, Offenbach).

In 2019, Xiang Ting made her debut in Switzerland at the Theatres of Biel and Solothurn singing the roles of Belinda and the First Witch in Dido and Aeneas (Purcell), to critical acclaim. Recent engagements also include Norina in Don Pasquale (Donizetti) with The Arts Place in Singapore, during which her performance of Norina received special mention in The Straits' Times Best Classical Concerts of 2019.

About Koh Jia Hwei
Jia Hwei started learning the organ in 2013 with Dr. Evelyn Lim. She continued her studies with Susan Landale and Gerard Brooks at the Royal Academy of Music in London (UK), where she was the recipient of the Joyce Rhoda Danzelman Award, Eric Windo Organ Award, and Stephen Bicknell Organology Prize. During her graduate studies in London, she was organ and choral scholar at St. Michael's and All Angels in Croydon, and organist at St. Mary's in Acton. She was awarded her Masters in performance in 2019.

Originally, Jia Hwei majored in piano at the Royal Northern College of Music in Manchester (UK), where her tutors were Jeremy Young and Carole Presland. She graduated with her Bachelors, and subsequently Masters of Music in 2003. She won a number of awards during her studies at the RNCM, including the Rawsthorne Prize, the Bach Recital Prize, and the Prix Scarbo.

Jia Hwei is now based in Singapore, and performs regularly for the Victoria Concert Hall Organ Series, most recently recording with violinist Lee Shi Mei and cellist Lin Juan in November 2020. In October 2019, she was featured as piano soloist with re:Sound. A review in the Straits Times lauded her "beautifully poised organ playing" and "compelling artistry".

About Ng Chet Wei
Ng Chet Wei is currently Deputy Director (Admin) at the Methodist School of Music (MSM). However, handling finance and admin matters is only half a role. The other half is spent teaching, mostly at the organ. Chet Wei earned her Masters of Church Music – Ministry (Organ) from Singapore Bible College (SBC), and her Bachelor of Accountancy from NTU. During her time at SBC, she was part of the college's handbell ensemble. She now directs the MSM Ringers, an ad-hoc community handbell group that has been a part of performances at various venues, including Esplanade. 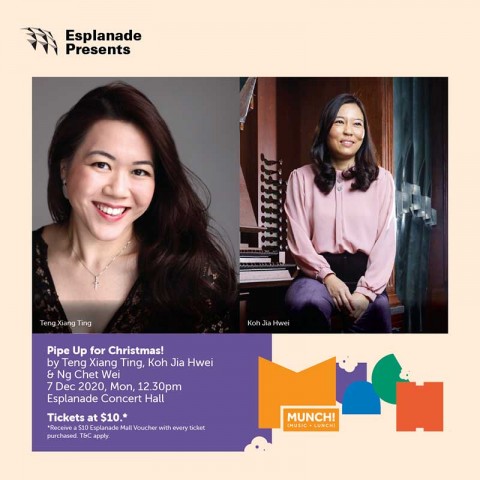