A History of Cinematic Exhibitions in Southeast Asia: Lecture by May Adadol Ingawanij

Organised by: Objectifs Centre for Photography and Film

This talk addresses the question of film exhibition histories rooted in Southeast Asia. Starting from prehistories of video art in the region to contemporary cinematic practices, writer and curator May Adadol Ingawanij will address the ways in which our relationship with screen media has evolved, and what this means for art practitioners, curators and audiences.

The talk will reference various screen projection practices, artworks and projects, including 'Animistic Apparatus', Ingawanij's most recent project. It takes as its departure point practices in Thailand where films are screened for spirits, in an exploration of the affinities between cinema and animism that begins to formulate a position away from Western theories of film spectatorship.

This event is part of a series of talks presented by Objectifs about ways of looking and understanding photography and film in Singapore and Southeast Asia, through the eyes of key practitioners, curators and writers.

May Adadol Ingawanij is a writer, curator and teacher, and Professor of Cinematic Arts at University of Westminster where she co-directs the Centre for Research and Education in Arts and Media. She works on decentred histories and genealogies of cinematic arts; avant-garde legacies in Southeast Asia; forms of potentiality in contemporary artistic and curatorial practices; aesthetics and circulation of artists' moving image, art and independent films in, around, and beyond Southeast Asia. 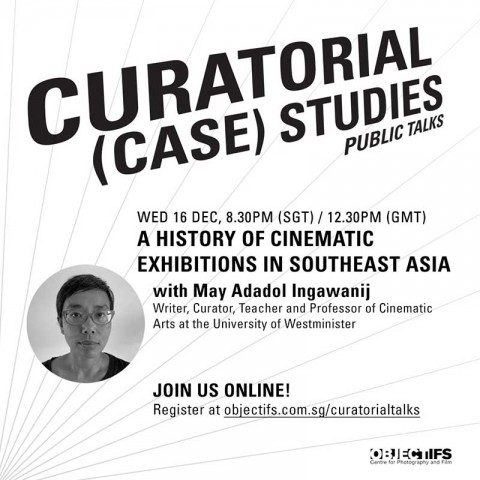