Unmasked: In on the Secret

Organised by: NTU Creative Writing and DIS/CONTENT
Performed by: DIS/CONTENT

Sneak a glimpse and swallow some secrets this November with NTU Unmasked and DIS/CONTENT, the slippery art collective bending dreams and genres. We have some skeletons rattling in our closet that we'd love to show you, so join us for the livestream on Creative Writing at NTU's Facebook page on the 29th of November. Stay tuned!

Cat Chong
Cat Chong is a transcultural twister child negotiating an embodied rejection of fixity and belonging. They're a graduate of the Poetic Practice MA at Royal Holloway and are currently authoring a PhD on global female-authored illness narratives at Nanyang Technological University in Singapore where they're a recipient of the NPGS scholarship. Cat is a proud queer crip whose durational work flails wildly between conceptual and confessional tendencies. Their interests include ecology, feminism, gender, health, contemporary poetics, medical humanities, and disability studies. They are also a co-founder of the Crested Tit Collective, UK.

Francis Bond
Francis Bond is an Associate Professor at the Division of Linguistics and Multilingual Studies, Nanyang Technological University, Singapore. His main research interest is in natural language understanding. He is an active member of the Deep Linguistic Processing with HPSG Initiative (DELPH-IN) and the Global WordNet Association. Francis has developed and released wordnets for Chinese, Japanese, Malay and Indonesian and coordinates the Open Multilingual Wordnet. He is the co-coordinator of NTU's Digital Humanities Cluster.

Reilly Phanes
Reilly Phanes is a teacher, non-binary queer witch, Vajrayana practitioner, Radical Faerie and esoteric buff. He is deeply interested in rituals, mythologies, mystical traditions and queer identities / consciousness, and his research and practice investigates and explores the intersection of these topics. He has a background in theatre and education.

Joanna Chak
Joanna Chak is an artist interested in travel, communing with human beings, nature, and explorations of space. With artistic roots in NYC, she is and is now living and exploring the arts in Singapore. A selection of her works can be found at https://justchak.tumblr.com/

Drew Davis
Drew Davis is a desert rat who fled from the sweltering suburbs to Los Angeles. He began a performative art practice (as anyone within 50 miles of Hollywood does) after studying at Otis College of Art and Design. Inspired by the likes of Lygia Clark and Rebecca Horn, he focuses on inter-object relations and the transformative power of leisure in art. In other words, Davis plays with big toys and works hard at making it look like he isn't working at all.

Reginald Kent
Reginald Kent is an M.A candidate in NTU. His research and practice mainly revolves around the queering of the modern short story. He's a Baba boy who does not eat Buah Keluak, uneconomically reserves his memory space for fun facts and will annoy you constantly with bad puns.

Sarah Supaat
Sarah is a twenty-something dabbler, currently being a "productive member of the workforce" instead of "blight on the family name". In her previous life, she studied Linguistics at NTU, and stage-managed on the side. Current pursuits include: learning to code & pole dancing (but not simultaneously)

Joy Chee
After three years working in Tokyo, Joy returned to Singapore this year, where she is currently pursuing her dream of extreme gardening and bread-baking. When she isn't preparing for the apocalypse, she's either writing feverishly, reading about ancient Chinese deities, or scaring herself with the afterlife. 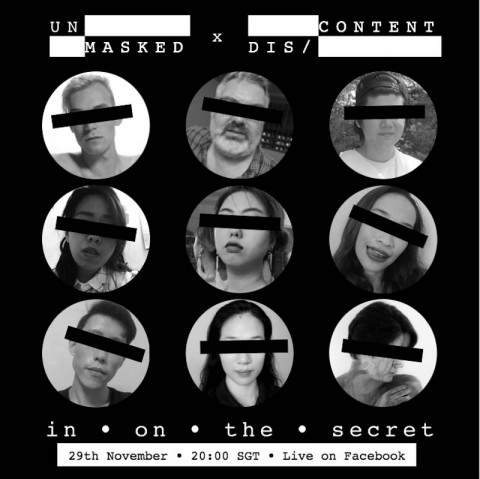